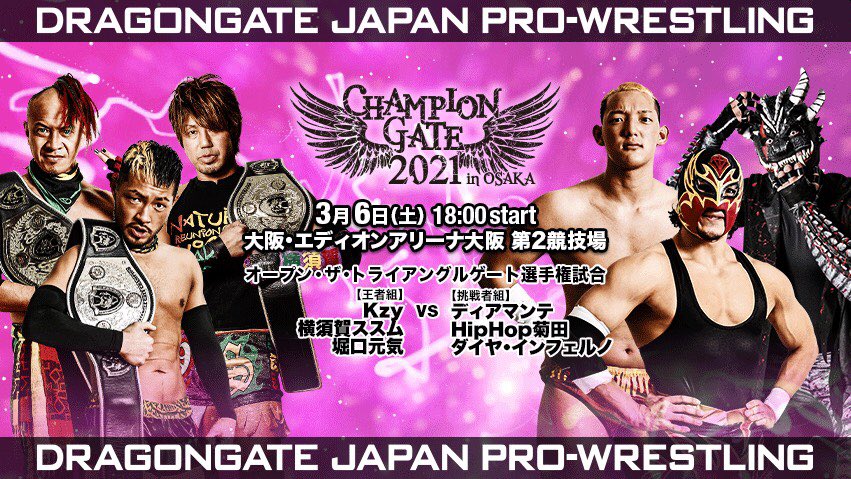 Dragongate leaves their “pre-season” of January and February for night one of Champion Gate, their first larger event of the year with both the Brave Gate and Triangle Gate on the line.

The crux of the opener was previewing tomorrow night’s Dream Gate match between Skywalker and Ishida. Since getting the Dream Key, Kaito Ishida has been hyper focused on destroying the Shun Skywalker’s knee ahead of the title match, so it was nice to see the continuity and build continue in this opener. Shun did a great job selling the knee throughout the match even when Ishida wasn’t in the ring with him. This was your now-standard Masquerade vs R.E.D. match, which has been the highlight of Dragongate cards so far in 2021. Any combination of the units in the ring with each other have such tremendous chemistry that the floor of these matches is incredibly high. It is notable, however, how little Masquerade is over with the native audience. La Estrella was taking a beating for the majority of this match and the Osaka crowd was more apt to pick at their fingernails than to show any interest. Kaito Ishida submitted his former MaxiMuM teammate with his Ankle Hold to win the match. He then further attacked the knee and ankle of Shun Skywalker ahead of tomorrow. ***1/2

This was a “these four aren’t really doing anything right now but we have to get them on the card” tag match. Shuji Kondo being in Match 2, unaffiliated, and somewhat adrift is very disappointing given how spirited his return was last July. One can only hope that before this unit shuffle is over he’s given more to do. The majority of this match was Gamma dismantling Punch Tominaga. Even if you have a fleeting awareness of Dragongate and it’s booking, that should tell you the importance of this tag. This went a big longer than it should have but was fine. Tominaga got the flash pin after taking 90% of the match on Gamma with a small package. **1/4

This was another low-stakes tag with tomorrow’s Twin Gate challenger team facing two teams made up of people who couldn’t team with their units for various reasons (Natural Vibes was defending the Triangle Gate tonight, so U-T was the odd man out and Masquerade was in a six-man instead of an eight-man in Minoura’s case). It’s a lot of fun whenever Masaaki Mochizuki gets to wrestle people on this roster young enough to be his fully-grown sons, and he was fun against his former pupil Kota Minoura.

Although I’m more than done with Takashi Yoshida, I cannot deny that his goofus antics are incredibly over with the crowd, especially his Mongolian chops. Yoshida got the pin on U-T with his sudden Cyber Bomb. This was pretty solid due to the chemistry and history of the teams and kept it pretty light-hearted but allowed the chemistry to show when needed. ***1/4

High End and R.E.D. will be the feud of the spring, and this trios featured the just made DEAD OR ALIVE main event cage match in it along with Ben-K and BXB Hulk. On top of that, High End is your new Super Face unit in the lineage of World-1, Monster Express and MaxiMuM, so get used to them because they’ll be around for the long haul and will likely be completely strapped up some time in the future.

SB KENTo, the uncrowned Rookie of the Year 2020, has really turned into a tremendous prick. He spent a solid amount of time fighting his rival Dragon Kid and shoving a Weekly Pro Wrestling picture of SBK unmasking him in his face while they were in the corner. As they are on the same side of the Parejas Incredible Revelos Suicidas Risk Cage match, I figure the Nagoya natives will spend the rest of March and April getting under each other’s skin. Only recently turning 21, SBK was the star of this match.

High End has buddening chemistry as a trio. The YAMAKid stuff in January and February was surprisingly great, and it continues with Ben-K being added into the mix. Ben-K, felt a little “off” since returning from his Final Gate concussion, finally feels like his older self. The final stretch of this match was particularly strong with SBK and YAMATO facing off, throwing each other with suplexes, until YAMATO caught SB KENTo with the Frankensteiner of the Almighty. Post match, KAI and YAMATO brawled until Mr. Nakagawa and Kazma Sakamoto pulled them apart. ***3/4

This was the most important singles match of HYO’s career. A member of the Class of 2016, he hasn’t seen nearly the success that his contemporaries Shun Skywalker and Ben-K have. Other than a very short Triangle Gate reign, his career was undecorated, and I would have probably slotted him third in the class, only ahead of Yuki Yoshioka who has disappeared into the Shadow Realm and the retired Katsumi Takashima. He got this match by being virtually undefeated in 2021, relying upon what folks have started to call the “Bobby Hill Special” in which he distracts the ref and then full-bore kicks people between the legs like the King of the Hill character. It has incredibly frustrated the Brave Gate champ Okuda, who already has the shortest fuse in wrestling.

HYO’s sleazy hi-jinks kept him in control and got several close nearfalls. Like his R.E.D senior Kaito Ishida, he focused on Okuda’s knee with his pencil (giant pointed stake that gets driven into someone by box attack) and stayed ahead of Okuda through nefarious means. And there was virtually every way to cheat possible, and even HYO took the brunt of it after he hit a top rope senton onto Okuda and about a dozen chairs. It wasn’t enough though and whenever Okuda found a moment, he ruined HYO’s day.

It wasn’t enough though, and Mr. Danger Zone went through all of that, dominated him on clean offense and choked HYO out after avoiding a powder attack (that was kinda mistimed as Ishida stood up on the apron for much too long.) I really liked this match, but I completely acknowledge that this is a match that you have to buy into the idea that the only way HYO was into this match was by cheating, and there was loads of it. A strong character performance from HYO and my favorite champion in the world continues to reign for another day. ***3/4

Natural Vibes makes their first defense of the Triangle Gate with the fall being Kzy pinning Dia Inferno after the Impact.

Hiphop Kikuta has such a command and presence for someone who is basically doing a hip attack gimmick. He’s much bigger than the remainder of the roster so him and Diamante feel like the Twin Towers with their spooky friend Dia Inferno. Natural Vibes is the ideal Triangle Gate team: You’ve got a couple of guys who have the crowd in their bottom of their hands (Kzy and Genki), an absolute heater who will throw bombs (Susumu), and a chemistry that lets the match ebb and flow and conclude in a fever pitch.

The RED goon squad attacked Vibes during their dance and were off to the races and decided to beat the heck out of Horiguchi. Genki Horiguchi is perhaps the most unsung person in Dragon System history: his bread and butter is taking a beating, getting the crowd invested in him getting free and making the hot tag, and he is as silky smooth now as he was as surfing enthusiast. Diamante was put into a position to show his big strengths (being big, taking some insane bumps, basing and having at least one imaginative submission), but the person who stuck out to me, and for once in a good way, was Dia Inferno.

With his rival Dragon Dia on the shelf, Dia Inferno was adrift. He existed to be the mirror of Dia, much like how Darkness Dragon was the mirror of Dragon Kid. So the last two months he hasn’t shown up a lot, and his gimmick and style never truly connected with the native audience. In this challenge, Inferno had a really solid section against Kzy that let his skills show and he came off like the brutal creepy thing that they have always portrayed him as.

This was the zero doubt defense of the weekend as Natural Vibes wasn’t going to drop this fall against the near bottom tier of the rudo army. So it’s sometimes a bit hard to be invested in a match where the expected outcome happens. These five wrestlers and one mysterious creature put together fifteen great minutes of trios wrestling. It’s not of the echelon of the greatest Triangle Gate matches of all time, but it was a match where everyone could walk away being proud of their effort. ***1/2

A very easy watch at two hours and change, but nothing exceptional. Dragongate typically has very slow starts to their years until Champion Gate ramps things up, and Night One did not ramp up the pace in midst of an Unit Shuffle and the road to Dead or Alive starting early this year. That all being said, when only one match is below three stars, you have a very good show. The impetus will be on tomorrow, with Shun Skywalker vs Kaito Ishida for the Dream Gate, for Dragongate to leave their mark on this loaded weekend.

Your Ol Pal "Iron" Mike Spears co-hosts Open the Voice Gate and Everything Elite on the Voices of Wrestling Podcast Network and writes Dragongate and Dragon System related content for the site from his compound in the Appalachian Foothills in South Carolina. He likes knives and tracksuits. 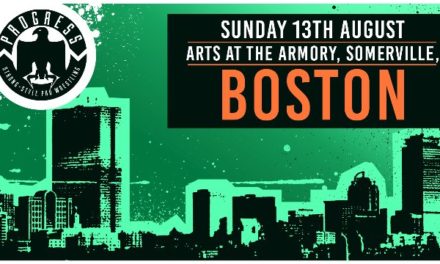