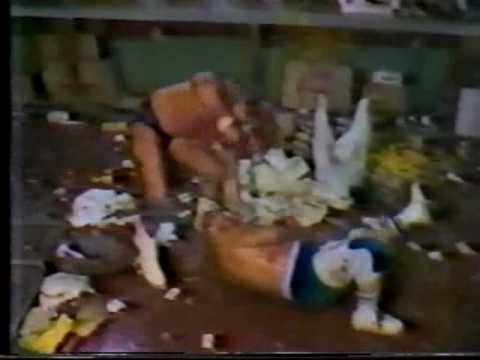 It would be somewhat of a misnomer to suggest that Memphis wrestling from the 1980s aged better than any other territory. Going back through the shows that were run out of the WMC-TV studios, you wouldn’t have to go far to find something that, witnessed or heard through the eyes and ears of the 21st-century wrestling fan, couldn’t fly today. In all reality, some of the things that were broadcast were near the knuckle at the time, but that was Memphis Wrestling for you: a territory that always felt like a law unto itself, yet outlived many other promotions through sheer bloodymindedness and the star power of Jerry Lawler.

However, it is one of the promotions that, if you ignore the very 80s comments and angles, is still exciting to watch today. When other promotions were relying heavily on squash matches and interviews solely to sell tickets to their next big events, Memphis television not only showcased footage from the premier matches at the Mid-South Coliseum but often had angles on the show filled with violence, blood and even fireballs. Load up YouTube, search for an episode, and you will rarely not be entertained.

It isn’t a stretch to suggest that the territory’s best days came in the first half of the decade, perhaps best indicated by the only two matches on the list coming from 1981. Distilled within these two matches though is a fine snapshot of exactly what Memphis had to offer, not just in terms of matches but in terms of wrestlers. Across eight men, you had such classic Memphis tropes as the enduring stalwart who always finds his way back, the relative newcomer who goes on to bigger/better things, second-generation talents, knock-off gimmicks intended to add an element of doubt for the crowd, and the wrestler on excursion from Japan. More importantly, all eight men in these two matches were ready to go; Memphis may have had its fair share of weird and wacky characters and storylines, but the crowd more often than not just wanted to see a couple of guys punch each other in the face. No messing around.

The first match, pitting Bill Dundee and the Dream Machine against Kevin Sullivan and Wayne Ferris, is the lesser of the two in terms of its historical significance amongst the collective wrestling community. However, it stemmed from an angle that can be universally understood and was used to great effect in the years to come. Initially hinted at as Dusty Rhodes under a mask, The Dream Machine had become a stalwart member of Jimmy Hart’s First Family. However, with Tojo Yamamoto and Wayne Ferris chosen to take on Southern Tag Team Champion Bill Dundee (Tommy Rich, the other champion, out through injury) with the belts on the line, the Machine took umbrage with Hart’s decision to choose Tojo Yamamoto and Wayne Ferris for the title shot. Having voiced his concerns and then watched his fellow stable members win the gold – though not at the canter the handicap nature of the bout might have suggested – the masked man hit the ring to save Dundee from a post-match beatdown, turning face in the process.

As Hart had a number of men in his Family and the Southern Tag Team Titles bounced around almost on a weekly basis, the Dundee and Dream duo faced off against a number of different teams in the weeks that followed, winning and losing the title in the process. To relatively little fanfare (and off the back of a brief feud with Lawler), Kevin Sullivan became the chief compatriot to Ferris, even challenging for the belt on the weekly Memphis studio show. Going fifteen minutes, it was Hart’s team who were victorious as Sullivan wrapped Dundee in a small package for the three, shortly after the manager had pulled the ropes down to send the champion hard to the concrete floor.

The Sullivan and Ferris of 1981 were worlds away from those that went on to be famous as the decade progressed. In his first notable heel run, Sullivan was more bodybuilder than Satan worshipper, though flourishing in his new role. Ferris already had the gift of the gab and the punchable face, but he also had the workrate that was considered unnecessary come the gimmick change following the move to New York. Coupled with popular wrestlers such as Dream and Dundee was a recipe for great wrestling.

No date was ever attached to the specific match Bowdren identified, though it was specifically listed as Louisville rather than Memphis. In the Coliseum, the teams met in some capacity (three tag matches and one six-man tag), before the feud spiraled out to incorporate Jerry Lawler, Dutch Mantell and a number of other talents from the region. During this run, the teams also met in Louisville, a match which – as far as I’m aware – isn’t available in full.

Joined in progress, Bill Dundee was already punch drunk in his attempts to tag out to Dream Machine. What followed was the standard Western tag style – cutting the ring in half, hope spots, heel manipulation of the referee, and halted tag attempts – coupled with Memphis touches such as the illegal use of a chain by Ferris as the referee was otherwise engaged. Dundee was underrated in the face-in-peril role: small enough and a good seller to make the heel attack seem legitimately damaging, yet with a reputation as a tough guy and offense that allowed him to launch himself at his opponents and grab a nearfall or two.

As with the second Memphis choice on the list, this was less about the match and more about the carnage that surrounded it. Unsurprisingly, the referee lost control and Jimmy Hart ended up costing his team the match by disqualification as he wailed away on Dundee with a kendo stick. With Lance Russell announcing that the match had run just shy of fifteen minutes, it becomes clear that the first ten were clipped. However, there were still five more to go in terms of the action as first Jerry Lawler and then the Nightmares hit the ring, turning it into an eight-man brawl, five on three.

It was the energy of a Memphis brawl that always made it worth watching, especially as they knew how to rekindle the crowd’s attention. As things looked insurmountable, a fired-up Dutch Mantell hit the ring, sparking an arena-wide brawl that threatened to take out an empty section of chairs and did wipe out a wooden barricade. They even took it into the bleachers as Lawler was sent tumbling down the stairs following a punch from a Nightmare. It was action unlike anything you could see at that time.

On excursion from All Japan Pro Wrestling, Masa Fuchi and Atsushi Onita spent over half a year honing their craft, picking up three reigns with the Southern Tag Team Championship along the way and aligning themselves with Tojo Yamamoto. A brief feud with Bill Dundee and Steve Keirn saw Fuchi and Onita lose their hair, before a run against a number of second-generation wrestlers saw them leave their mark on wrestling history at large.

Starting with brothers Ricky and Robert Gibson, Fuchi and Onita were then positioned opposite Ricky Morton (son of referee Paul Morton) and Eddie Gilbert (whose father, Tommy Gilbert, still wrestled in the area from time to time). Whilst it was an argument about nepotism that cracked the region in half in 1977 (Nick Gulas wanting his son, George, to be pushed), there was nothing like that for these four wrestlers. If you were going to make it in Memphis, you had to prove you could fight, and Gilbert and Morton, young and handsome as they were, weren’t going to back down from a fight.

Two years later, it was fresh enough as a concept to retread with four new workers. Once more, the footage of the actual match is limited; Tojo Yamamoto sneaking in to throw salt in Gilbert’s eyes to gift his team the win. The match was largely secondary to the events that followed: Morton wailed away with a kendo stick on Fuchi, Onita and Yamamoto before all five men – manager included – found their way over to the concession stand.

Anything that wasn’t nailed down became a viable weapon, from iceboxes to jars of mustard. Adding to the growing sense of unhinged madness was the Tupelo promoter’s wife, not smartened up on what was about to occur, trying her best to get the brawling men out of her food stand. The man who seemed to suffer most was Yamamoto: 54 years old at the time, he spent a large part of the brawl down on the concrete, a glass condiment jar to the head causing him to bleed profusely from around the ear. Though, according to Jim Cornette, this did little for business going forward, it was another example of the lengths the territory was willing to go to to ensure people booked tickets for the next show – you never truly knew what was going to happen.

Though Memphis in many ways became an example of the law of diminishing returns, each subsequent attempt to recreate the manic nature of this fight less successful than the last, in 1981 it was mind-blowing for the Southern wrestling fan. Turn up in Tupelo, lug yourself over to Louisville, or mooch on down to the Mid-South Coliseum; you were almost always guaranteed to see something different.