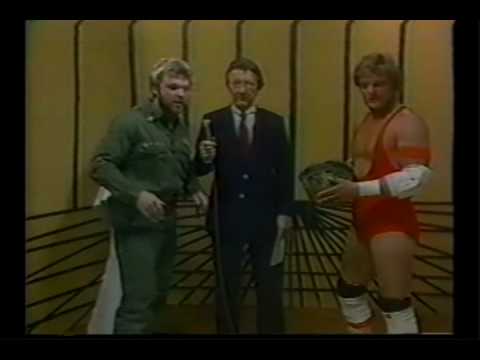 Note from the writer: After a brief hiatus due to the birth of my son, “Looking for Hot Stuff” will be back in action at a more regular pace. Thank you for your perseverance thus far.

The end of Jimmy Hart’s run in Memphis didn’t completely signal the end of Eddie Gilbert’s time in the territory. Though Mid-South was on the horizon, there was still time for Gilbert to unveil something new that had him re-inventing himself once more.

Eddie Gilbert’s Army was a short-lived stable in Memphis, one which saw Gilbert ripping off Lawler’s own past in the promotion as a means to mock the champion. If an Army for Lawler in the 70s was good enough, it was good enough for Gilbert in the 80s. With a Jimmy Hart lookalike in tow mere days after Hart had left, Gilbert’s first call as ‘General’ was to accept Jerry Bryant and Plowboy Frazier into his new faction.

Though there was potential in Gilbert’s mockery of Lawler, the time had passed with regards to their feud. Instead, the involvement of a new manager, Tux Newman (presented as a friend of Andy Kaufman who blamed Lawler for the cancer that killed the comedian) and the return of Randy Savage largely sidelined whatever they had in mind for Gilbert’s Army. Frasier and Bryant teamed on television a couple of times, though Gilbert was largely back to being presented as ‘Hot Stuff’ as he formed a team with a rather strange partner: Lanny Poffo, the man he had feuded with only months previously. The two had multiple unsuccessful attempts at wrestling the tag gold from the Fabulous Ones before Gilbert’s move to Mid-South ended their team.

It was as ‘General’ Eddie Gilbert that he was first introduced on Mid-South television, alongside a second debuting wrestler: The Nightmare, a masked heel played by the former Moondog, Randy Colley. During their first match together, a squash victory over ‘Rocky’ Montana and Tim Horner, Bill Watts announced that it was Gilbert himself who had named The Nightmare, the reason being that he didn’t want to reveal who the man under the mask truly was. Even in the squash match, the roles were clearly established as Gilbert struggled against Horner, before picking the bones of his opponent after a monumental powerslam by the Nightmare turned the tide in his favor. A piledriver by the Nightmare on Montana was eventually enough to end a one-sided contest.

This was a partnership that bore fruit as the two remained linked for the rest of 1985, a partnership that saw both singles and tag team gold for the duo. It was clear that Gilbert wasn’t considered big enough or legitimate enough to be a main event guy in the promotion at this point. However, he had the chops on the microphone to build heat for The Nightmare, a man who fit the expectations of Watts and the Mid-South crowd when it came to their champions.

The differing expectations of Gilbert and the Nightmare was clear as the duo set their sights on Terry Taylor’s North American Heavyweight Title. Positioned as Gilbert’s attempt to scout Taylor before the Nightmare challenged for the gold the following week, the focus instead shifted to Ric Flair’s presence at ringside. Gilbert barely lasted more than a couple of minutes before submitting to the figure four as the focus switched to the animosity between Taylor and Flair. A post-match spot that saw Taylor reverse Flair’s own version of the figure four relegated Gilbert’s role in the whole angle to sacrificial lamb.

The overarching storyline of Taylor’s challenge for Flair’s NWA World Heavyweight Championship bled into the title match the following week. Offering $10,000 to both Gilbert and the Nightmare if the masked man won the North American Heavyweight Title from Taylor, Flair also hung around at ringside to undertake the role of cheerleader. A methodical beatdown ensued, yet Taylor continued to surprise Jim Ross and Joel Watts on commentary as he kicked out of a number of nearfalls.

The comeback saw Taylor not only land his flying forearm finisher, but lock in the figure four that had been so successful against Gilbert the previous week. Whilst both Flair and Gilbert interfered in the match by distracting the referee – Gilbert earning an unceremonious flip into the ring from the apron for his trouble – it was the NWA Champion who played the biggest part. Slipping the Nightmare an object, the masked man put the weapon inside of his mask and nailed Taylor with a headbutt, knocking him out cold. Three seconds later, the Nightmare was the new North American Heavyweight Champion.

As the Nightmare’s undefeated streak continued, Gilbert’s role became purely a managerial one, at least on Mid-South’s weekly television show. In the most competitive challenge the Nightmare faced in the early weeks of his title reign, it was Gilbert this time who managed to use the cover of a collision between himself and Bill Dundee to pass his charge the illegal object. With a little oomph added to the headbutt, Dundee, just like Taylor before, went down.

The seeming synergy of their partnership made the next step in their storyline all the more surprising, though it served as a means to introduce another significant acquisition into the fold in Sir Oliver Humperdink. Having spent time in Crockett in 82 and 83, as well as Florida in 84, Humperdink had built a reputation as a good heel manager and had made Mid-South the next stop on his meandering tour through the territories. With Skandor Akbar involved with a lot of the main heel wrestlers on the roster, a significant coup needed to occur in order for Humperdink not to be dead on arrival.

Having not shown any clear sense of turmoil or dissension on television, a ‘press conference’ which included Eddie Gilbert, Humperdink and the Nightmare saw ‘Hot Stuff’ confused as to the purpose of the meeting. Citing some issues behind the scenes and the need for the champion to have proper representation due to the schedule he now operated, Humperdink revealed that he had replaced Gilbert as the Nightmare’s manager. An offer to still be involved from Sir Oliver saw an angry Gilbert grab him around the throat, though he eventually decided that discretion was the better part of valour and walked off before striking the man down or earning the ire of the Nightmare.

Though you’d think that this might have heralded the end of their relationship, it was not quite as simple as that.

They did battle once on television, seeming a nod to the end of their working relationship. Though Gilbert had been a natural heel since the unveiling of the ‘Hot Stuff’ gimmick, he had spent many years as a babyface and was just as effective in that role. A strategy that involved hitting, moving and going for the mask when all else failed; the finish even cleverly saw Gilbert block the usual object-assisted headutt as he knew exactly what his former charge was liable to do to him. However, this weakened him enough for the Nightmare to apply the piledriver for the expected loss.

What this initial decoupling from the Nightmare did allow to happen was for Gilbert to begin to get involved in other people’s business. Having spent several weeks as a nominal babyface, Gilbert’s most notable involvement had been as a means to promote the lethality of El Corsario, a twenty-year-old Savio Vega. The masked man, involved in a pre-match display of his martial arts, whacked Gilbert in the throat, causing Hot Stuff to bleed from the mouth in a contest that never officially began.

Gilbert was somewhat aimless during this admittedly brief period of time. Though he had what it took to be a decent babyface, his true value in Mid-South was as a heel. With that in mind, he was soon booked in a manner to dispel any sense that he was actually a good guy at heart.All it took was hospitalizing a ‘midget’ wrestler.

With old Memphis stalwarts Bill Dundee and Dutch Mantell involved in a feud with the Fantastics, a match involving Dundee teaming with Little Tokyo to take on Wendell Cooley and Little Coco saw the babyface tag team interfere and cause Dundee the ignominy of being pinned by Coco. Worse yet, the following week saw Coco parade around in Dundee’s shocking-pink suit, a seeming war trophy that he had helped himself to at some point.

Just over a month later, Gilbert walked out before Dundee and Mantell were scheduled to take on Pat Rose and Karl Stiles. In his hands, he carried a paper bag, one which it turned out housed the pink suit that Dundee had lost to Coco. Alongside some verbal platitudes about how much he respected the two men from their time in Memphis, Gilbert returned the outfit, much to the delight of the ‘Superstar’.

Where was Little Coco? According to Bill Watts, he had ended up being taken to hospital, though no-one exactly knew what had happened to him. Watts mused on the involvement of GIlbert – how else had he regained the suit? – but it remained largely unconfirmed the exact nature of Hot Stuff’s involvement. All that was clear was that this brief flirtation with babyface-dom was over.

Just in time as well. Having floundered during the late summer months, things for Gilbert were about to kick off once more. Title runs and storyline intrigue were about to unfold in some of the biggest moments of Gilbert’s career thus far.