VOW 2020 Match of the Year: Graps in the Time of COVID

It’s hard to overstate the impact that the global pandemic had on pro wrestling all across the world in 2020. Companies closed their doors for months at a time (or in some cases maybe permanently), while others found ways to keep working through the whole year. Wrestling became more of a television product than it has ever been before, with WWE going so far as to enclose their show in a dome of lasers and video screens and literally direct the crowd. 2020 was hard for many and was also just… weird.

What’s interesting is that you can see this impact even in our Match of the Year poll for 2020. The number of matches and the quality of those matches all show signs of the state of flux that wrestling was thrown into. You can see on the charts people beginning to get their sea legs back and figuring out how to run. Let’s take a look at one of those charts. 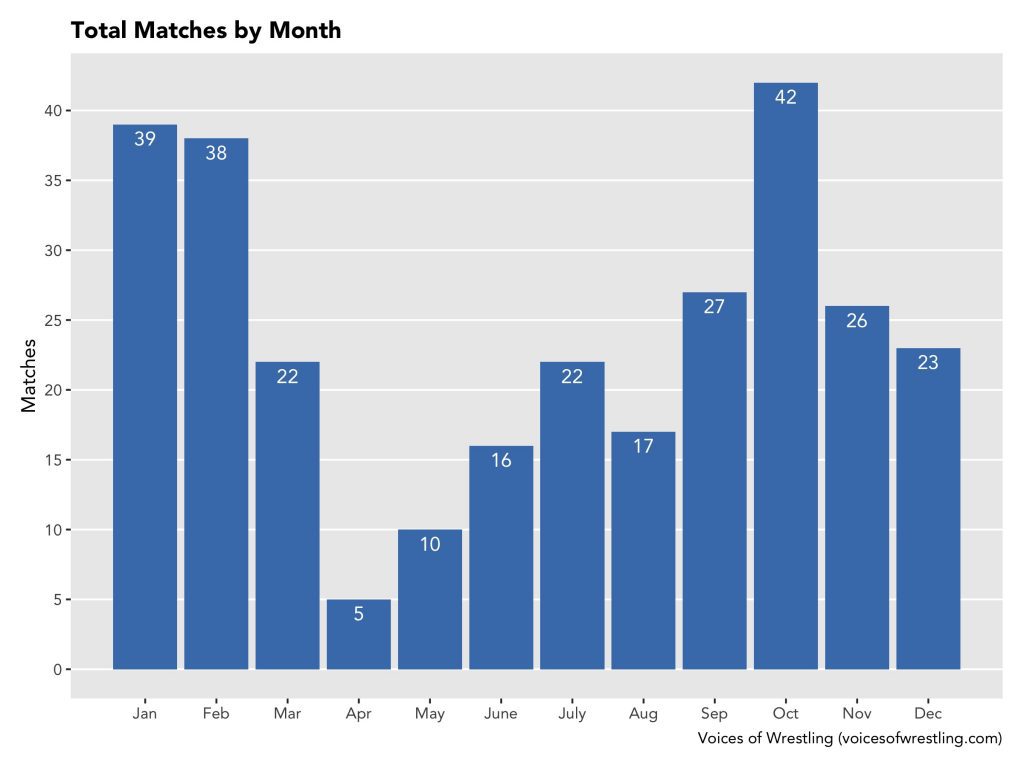 We begin the year strong, with January and February doing very well, as they often do, due to Wrestle Kingdom, Royal Rumble, and many other events. This year gave us the first early year pay-per-view from AEW, as well, which included the Match of the Year. By March, the virus had largely been contained to Asia at that point and it wasn’t until midway through the month that it made a giant splash in the US and elsewhere as Rudy Gobert touched some microphones and time stopped.

April, though — April is where it all falls apart. By this point in time, people have not yet figured out how to do the no fans wrestling well. There is no Thunderdome. WrestleMania took place inside the WWE Performance Center! It was chaos. To no surprise, April only produced five matches that made the poll. Of those five, three came from WrestleMania and two of those were cinematic matches. Another one of the five came from an episode of Being the Elite. The fifth match was from an All Japan show. Only one of these matches would receive a first-place vote: Jake Lee, Shuji Ishikawa & Yuma Aoyagi vs. Kento Miyahara, Suwama & Zeus from the All Japan show.

These five matches would manage to generate a total of forty-five points.

All this from a month that typically includes Bloodsport Weekend, with The Collective and various other shows popping up and making waves in our end of year ballots.

May still looks pretty rough. We get five more matches than April, for 236 points. What is noteworthy, though, is that only three of the ten happen before May 23. It remains drier than normal for June, July, and August. Part of that, of course, is the movement of NJPW’s G1 Climax to September/October. 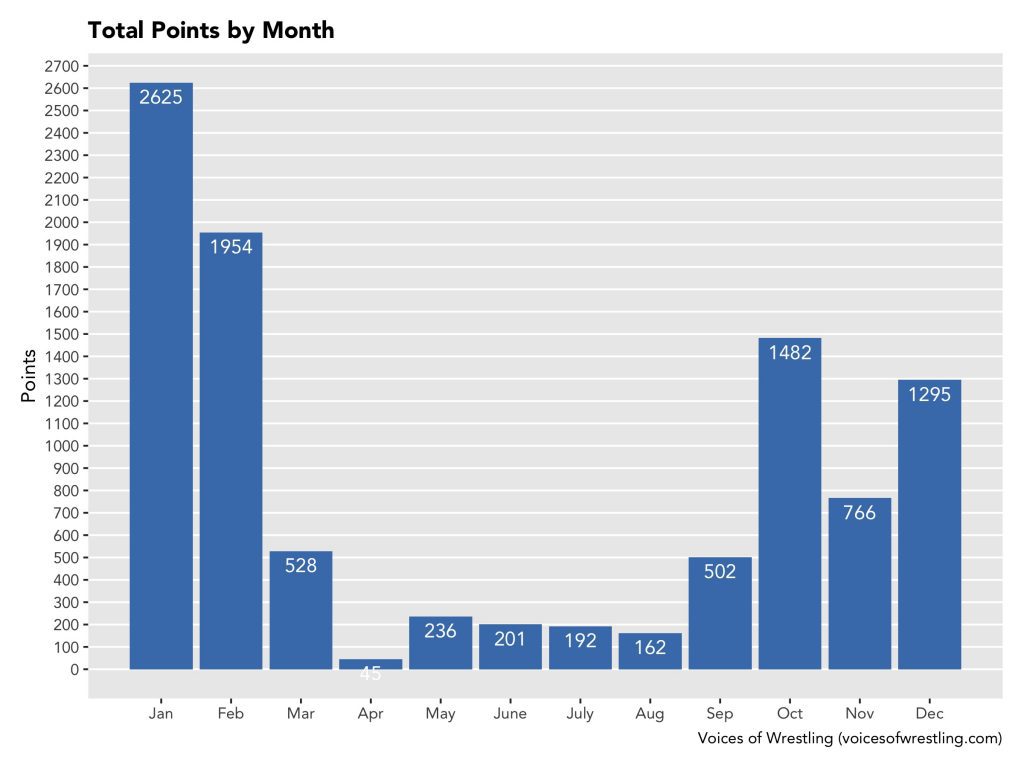 Even more dramatic than the Matches graph is the Points one. You can see that while there is an uptick in matches as summer goes on, they weren’t the matches that stuck in people’s minds when it came time for the voting. These were the kinds of matches that got lower scores on average, as you can see below. 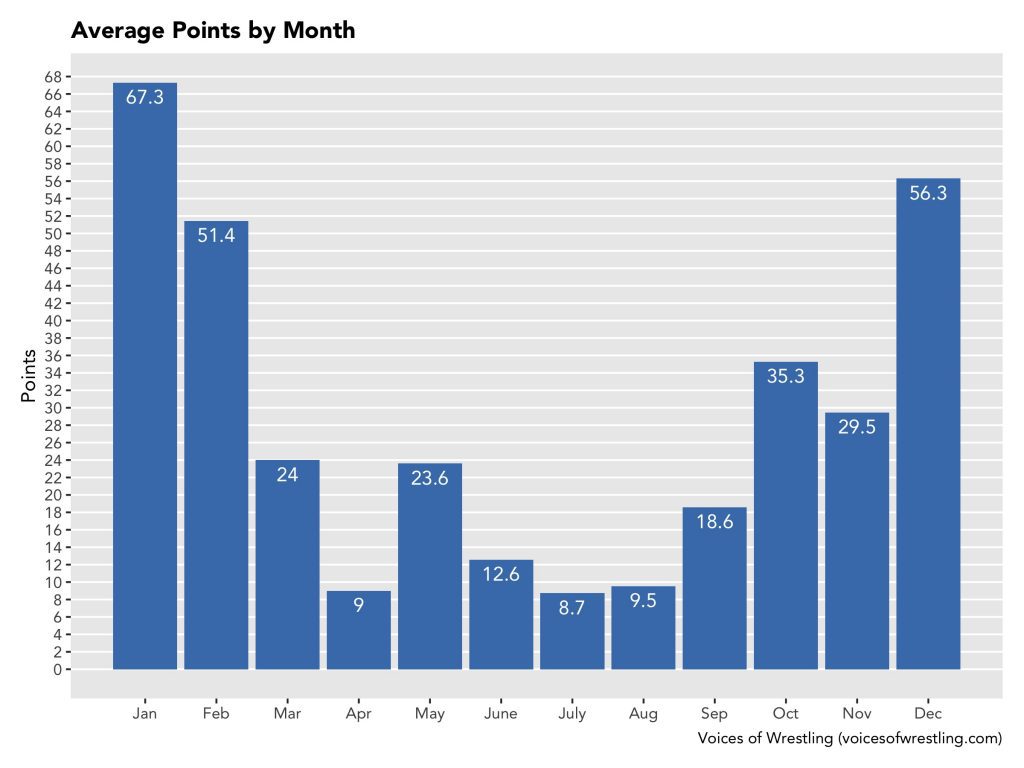 When it came time to choose a Match of the Year, our voters weren’t reaching for much that fell in that window either. You can see a giant dip from April through September right in COVID Canyon, there. August, in what certainly has to be unprecedented in the poll given the usual placement of G1, did not have a single match receive a First Place vote. Not one. 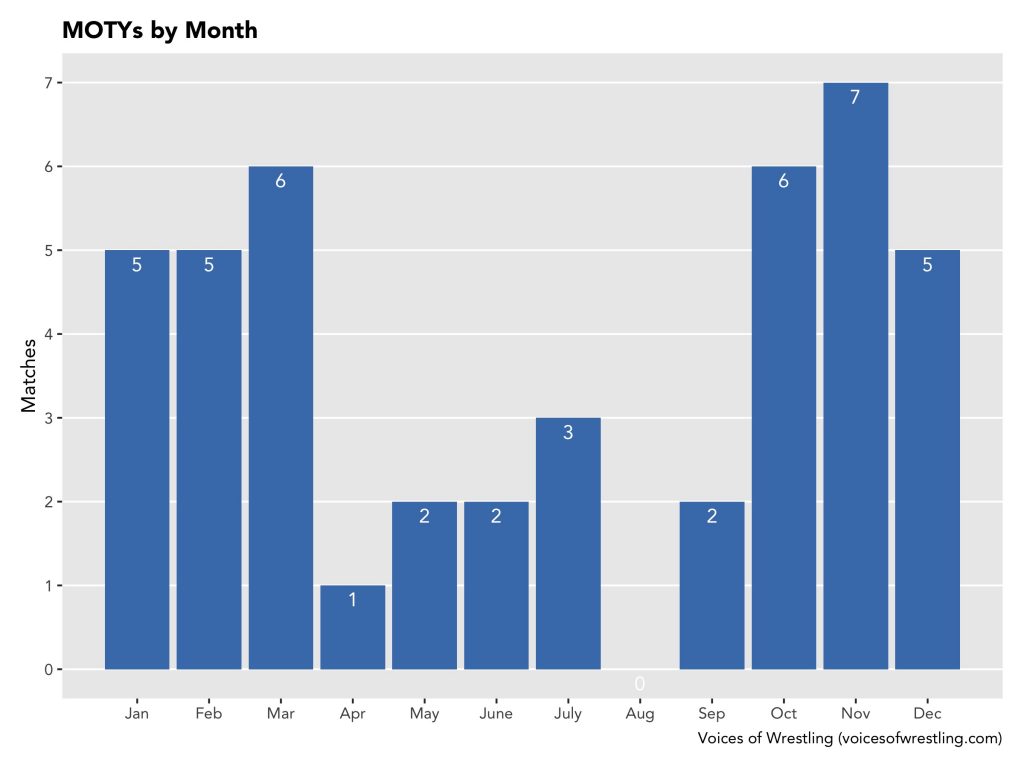 How does this compare to last year? I’m glad you asked!

When you look at the matches, you see a much more even distribution in 2019. You can see how April and July/August both rise up a bit out of the rest because of Bloodsport Weekend and the Japanese tournaments. Those are now the lowest months for 2020. 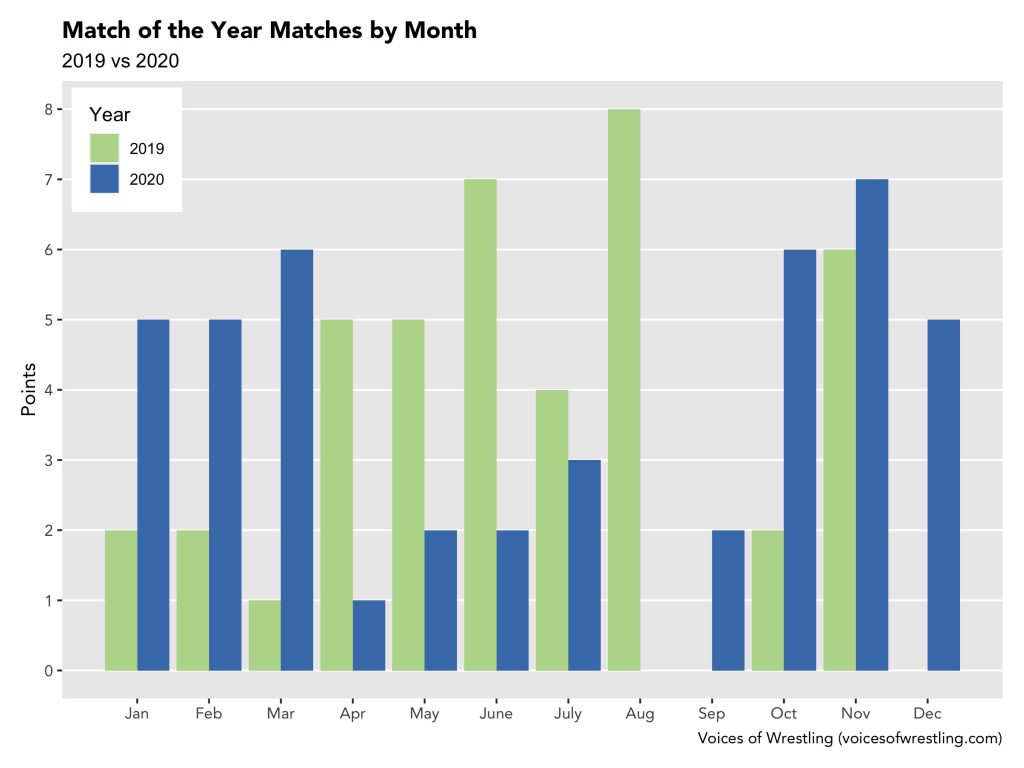 When it comes to First Place votes, 2019 actually has two months without a single vote, September and December. Perhaps that is a result of September being the time when everyone is recovering from their big summer tours. With December, I’m not as sure why, but given we’re only looking at one year here, it could simply be an aberration.

What I find interesting is just seeing how Spring and Summer are the most vibrant times for pro wrestling and this year, it was taken from us. It was taken from the wrestlers, ring crew, promoters, and everyone else down the line who earns a living in some way. It was taken from the fans. While a small thing in the midst of the whole giant world of consequences we’re all living with, it’s still a bummer.

Here’s hoping for a recap of 2021 where we illustrate the bounce-back of this weird world we all love. 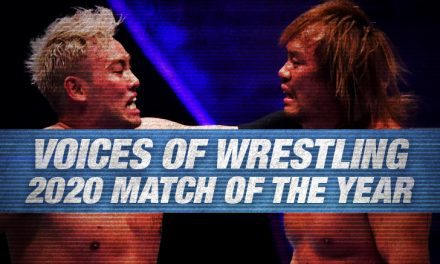 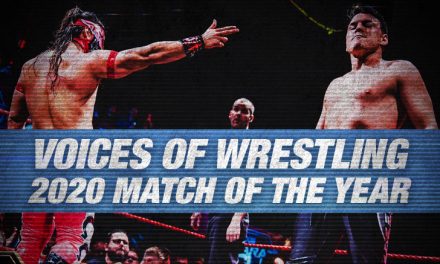 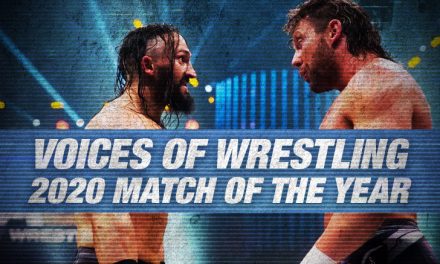