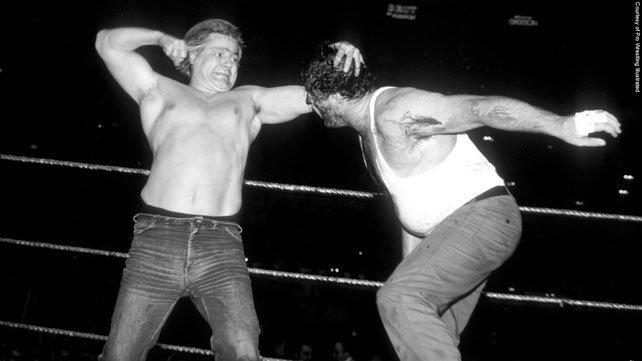 During the heyday of the territories, there seemed to be two different modes of thought about long term booking strategy in the main event. The money was either in the chase, in which you put your belt on a heel and had the most popular wrestlers try and win it off of them over a period of time, or in establishing a strong face champion who spent their time battling monsters of the month and heels that appeared threatening, but were ultimately vanquished.

It isn’t hard to see where the WWWF/WWF put their stock in terms of how to run a territory. With a brief (relatively) interlude of Superstar Billy Graham holding the gold for just shy of 300 days, it was almost four decades between the establishing of the WWWF World Heavyweight Championship and its first extended heel title holder (Ric Flair in 1992). Bruno Sammartino, Pedro Morales, Bob Backlund, and Hulk Hogan had been in the prime position to carry the promotion to its position as the largest wrestling company in the world.

Ultimately, to be so reliant on a strong face champion, you need a murderer’s row of potential heel challengers. Though the focus may have been on what Sammartino or Backlund or Hogan were doing when it came to the main event, bubbling underneath the surface more often than not were a raft of potential eventual antagonists for the reigning champion.

Outside of appearances by the Intercontinental (Pedro Morales) and the Tag Team (Tony Garea and Rick Martel) Champions, the WWF fans at the beginning of 1981 often saw crushing heel victories on their episodes of All-Star Wrestling. Some, such as Killer Khan, were relatively recently debuted in the area. Others, such as Hulk Hogan, were more established, showcased as a means to maintain their heat for further feuds with Backlund or other noteworthy stars such as Andre the Giant.

One that fell into the former category was Robert Rudolph Remus, better known as the ill-tempered drill instructor, Sgt. Slaughter. With a character inspired by Jack Webb’s character in a 1957 film called ‘The D.I.’ and the eye for branding of the WWF (Sgt. an improvement on Drill Instructor Bob as had been used in the past), Slaughter was primed for a run with Backlund. His was a character that was easy to dislike: not everyone had been caught in the crossfire of the angry words of a Marine Corps drill instructor, but most know a bully when they see one.

However, it wasn’t his run opposite Backlund that was the highlight of this first run in the territory. Instead, it was a heated battle with a wrestler-turned-announcer that left its mark on the wrestling world at large.

Pat Patterson was the voice, alongside Vince McMahon, of All Star Wrestling. Having entered the territory as a heel in 1979, Patterson’s nefarious demeanor ended after a falling out with his manager, the Grand Wizard, who had tried to sell his contract to Captain Lou Albano. Shortly thereafter, Patterson began to offer his voice to the WWF’s syndicated television and eased off when it came to the in-ring action. Having debuted in 1958, Patterson’s place in the in-ring spotlight was fading, yet there was still the odd flicker that was afforded the maestro from Montreal.

With a character who was all about harsh treatment, exacting standards and a bullying demeanor, the introduction of the Cobra Clutch Challenge was a masterstroke of booking. Having won many matches the aforementioned submission, a designated spot on each All-Star Wrestling show in which Slaughter could challenge wrestlers to break the hold allowed him to further showcase his arrogant ways. Starting off with Jim Duggan, the choices of opponents were also well-judged: men that were physically impressive themselves or had some name value (Johnny Rodz was a later victim to the Challenge) were ragdolled around by Slaughter, only further emphasizing his physical prowess.

The big focus was as to whether Slaughter could maintain the hold when he hadn’t already beaten down his opponent during a match, a question that McMahon was quick to suggest came from the mouth of Patterson. Even Slaughter sold that slight sense of unease when Duggan was the first man to volunteer for the challenge. However, as wrestler after wrestler failed the challenge, it only served to inflame Slaughter’s sense of superiority, alongside a desire to prove everyone wrong once and for all.

Following Jack Carson’s unsuccessful attempt to break the hold, Slaughter almost applied the hold to Joe McHugh, the ring announcer, in a moment of madness. Drunk on his own self-importance, he largely ignored the reprimand that followed, taking the interview as an opportunity to lay down the challenge to Pat Patterson. For double the money – $10,000 – Slaughter offered Patterson a chance to break the hold right there, right then. The war of words escalated as Pat turned down the chance until he felt ready; Slaughter called him ‘yellow’ whilst the Grand Wizard dubbed him a ‘chicken’.

Rick McGraw came closest to breaking the hold in a valiant losing effort, but it took the refusal of the Black Demon to even engage with Slaughter to spark Patterson into life. Sick of all the abuse and fired up following a Sergeant slap, Patterson finally agreed to step into the ring and take the challenge. Stripped down to his work trousers and shoes only, he tried to use the ropes, leverage and the turnbuckles to break the hold, each successive attempt weakening Slaughter. Just as it appeared he was about to escape, the Sarge caught him with a knee to the stomach effectively ending the challenge before it conclusively ended. One wooden chair shot later, the blue touch paper was lit.

Briefly hijacking the attention of a March Madison Square Garden crowd before a match between Bob Backlund and Stan Hansen, Patterson challenged Slaughter to a match for the following month’s card. In the weeks that followed, not only was the challenge accepted, but harsh words were fired back and forth between the two men. For Patterson, it was a question of pride; for Slaughter, it was a chance to silence the doubting masses.

It was Patterson’s prideful exuberance that put him in control from the opening bell in their first Madison Square Garden match (April 6). It was also this exuberance that almost cost him as Slaughter dodged a charge and sent Patterson flying through the middle rope and to the concrete floor. Signs of what was to come between the two could be seen as Slaughter sent Patterson into the ring post before biting his nemesis on the forehead, whilst Patterson returned the favor with a chairshot to the thigh as the tide turned. Both men got physical with what they saw as an overly officious referee early on in the match; the finish saw that boil over as he was deemed surplus to requirements as the two men brawled in and around the ring. A double disqualification did little to resolve their issues, nor did the post-match brawl (outside of one more hint at Patterson’s ability to break the Clutch).

However, it did set the table for what was to come the following month. With no-one able to enforce the rules, the rules became unnecessary.

Less than a month later (May 4), Patterson didn’t need to curry favor with a feverish Madison Square Garden faithful, but he wore a ‘I Heart NY’ t-shirt just to nail home the point. There was going to be no pretense of a clean, scientific contest this time: an ‘Alley Fight’ allowed both men to take out their frustrations on the other, rules be damned. Though the WWF did have steel cage and Texas Death matches as means to end when it came to finishing up a feud, this gimmick was a rare example of the promotion going ‘hardcore’ before that was a more ubiquitous wrestling concept.

To give Slaughter his due, there was no running like he did the first time the two men met. Instead, he ran straight into a barrage of punches from Patterson, blows that soon gave way to whips with a belt as the ante was upped in terms of the levels of violence. Turnabout was fair play as Slaughter got his hand on the leather, using the belt in a modified clothesline before returning the favor with a whip or two of his own.

The shirt that proclaimed Patterson’s love for the city was soon destroyed as the battle raged back and forth with neither man establishing clear dominance for long. Slaughter was busted wide open with a slingshot that bypassed the turnbuckle and saw him collide with the ringpost, yet still seemed on the verge of victory after landing a brass knuckle-assisted punch to Patterson’s face. The loss of blood and the physical toll of the match had taken it out of Slaughter, however. Unable to fully capitalize, he was subjected to multiple cowboy boot shots as Patterson fed off the crowd, a crowd who whooped and hollered for every blow.

Considering his animosity towards Patterson and the need for Slaughter to remain strong, it was serendipitous that it was The Grand Wizard manager who threw in the towel for his charge to end the contest. It was clever booking: Slaughter never surrendered, yet the feud had ended with the good guy on top, striking back against the man who had tried to bully and belittle him. In victory or defeat, both men had done themselves justice. Patterson would return to the commentary booth with his head held high, whilst Slaughter continued to challenge Backlund for the world title.

Slaughter’s initial run in the WWF was relatively short, ending later that same year in August. That gave the promotion one last chance to run this match again, this time in the Spectrum in Philadephia. A less-heralded match, but one that still offered the fans in attendance a high powered brawl, Slaughter’s impending exit from the territory allowed a more definitive victor.

As Patterson wailed away with boot shot after boot shot, Slaughter hightailed it up the aisle and to the back, effectively surrendering—once and for all—to his opponent. 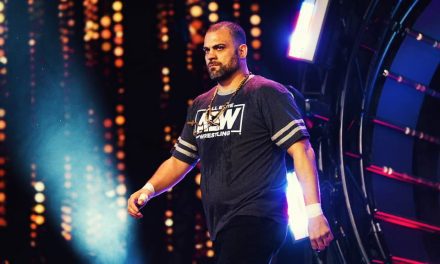 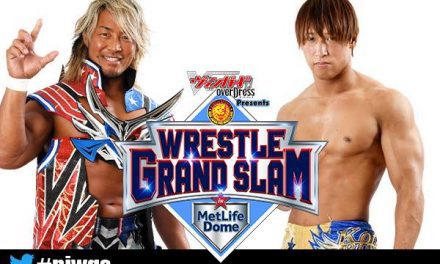 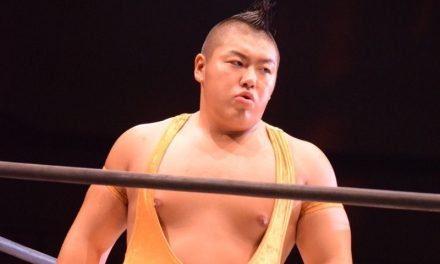