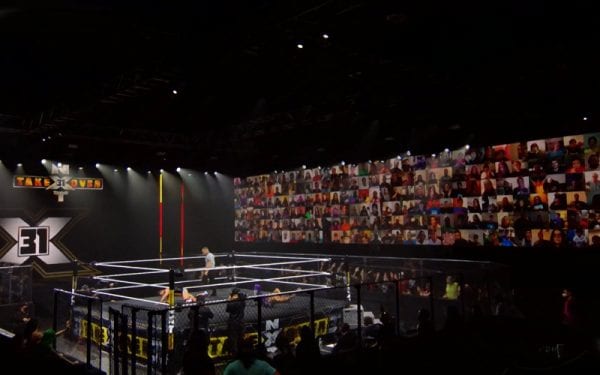 I’ll need you to bear with me—while there is wrestling involved—this is mainly a personal story. It does have a point. This article is a journey, not a destination. Although, I do have a destination in mind.

For nearly thirty-eight years, I lived a lie. A god damn lie and it saddens me, angers me, and sometimes makes me filled with regret. That lie was I was a heterosexual male named Jerry. Jerry was undoubtedly quite unhappy. Jerry felt miserable, unnerved, a prisoner of a cage made of flesh and role defining norms placed in this society. Jerry felt helpless, trapped, and utterly defeated. Jerry didn’t know where to go or were to look for answers. Jerry’s therapist, who is wonderful, did the best she could. It wasn’t until certain cracks, certain understandings, and feeling free enough to explore that the answer came. When the answer came it felt as if shackles unlocked, cages were opened, and a feeling of truth and self-acceptance shined sunlight on me and gave me warmth.

It took nearly thirty-eight years before Jeri emerged and burst out of this oppressive cocoon. I remember that day when in my therapist’s office I came out to my Mother as both Bisexual and Transgender. She handled the Bisexual reveal rather well. The fact I was in reality a Transgender Woman she pushed back on heavily. “We would’ve seen this sooner”, “I don’t believe you”, “I don’t accept this”, “You aren’t cross-dressing right now so how can this be true.” Name an excuse or critique of who I was and I probably heard it from her. She refused to believe this was my reality.

Newsflash, it fucking was and still is. For the first time in my life, I knew who I was. When I was dressed/presenting femme my anxiety while not gone was neutered. My confidence level was boosted, I felt lively, I felt lovely, I felt . . . .me. Every step scares me, but I take them. Every movement forward comes with caution and fear, but I trudged on. In August 2020, I began to participate in HRT which was a major step and is what to some degree finally smacked my parents’ in the face and made them realize this wasn’t some late adulthood phase that was going away. They still don’t like it, they still fight it, but they now realize it’s happening, it has happened, and they get no say in it whatsoever. Freedom.

What an incredible feeling. So, what does this have to do with wrestling?

I do hear you asking and I will answer.

There’s one step I haven’t had the chance to take. While it may sound ridiculous, for me it’s a big one that I want to happen. Hell, I go one step higher and say I NEED it to happen. As I have openly admitted in articles, in reviews, in tweets, I am a big fangirl at heart. Pro wrestling is my biggest fandom. It consumes most of my time, it’s what I know most about, since watching a tape of WrestleMania VII, it has given me more excitement, thrills, fun, and emotional highs and lows than any other form of entertainment. Maybe that’s kind of stupid, but if so I’ll cop to being dumb as hell because I love and enjoy pro-wrestling so damn much.

But every time I’ve been to a show, it was when I was wrapped up in my lie. Jerry has attended many a wrestling show, poor Jeri could only experience it from within her shell. In 2020, I was ecstatic at the possibility of going to Madison Square Garden in August to finally attend a wrestling show as the real me. The person that was meant to attend these shows, the person that was meant to be. It was going to be an incredible experience both pro-wrestling and personal wise.

COVID had other plans.

It was a crushing blow. To make it personal and admittedly all about me, here I was prepared to be out and attend and do so much as the person I truly was, and it was all taken away. No Pride events, no concert venues, no large gatherings, no dance clubs, no live pro wrestling. I came out of the closet but was rewarded with being told I had to stay in the house. Fuck my timing.

Drove me crazy, made me lash out irrationally. The Madison Square Garden trip was canceled and who knows when that moment will return. Live wrestling returned in some form but I still can’t justify making the drives and attending the events with everything going on. That’s not a judgment on anyone doing so, that’s a personal decision that burns inside. I WANT to be at a live event so bad. I want to have my hair styled the way I want, dressed the way I want, being the woman I know I am and have a good time. Not so much to ask, but right now it’s a tall order that can’t be filled and it pains me mentally. Every time I see a wrestling event that’s only a few hours away, I’m tempted to go, but I know better, I know it’s not the time, not the moment, not the proper experience. Maybe I’m being overly cautious, petty, and greedy but I need it to be special for me. Right now as the COVID-19 pandemic continues (although there is hope) now definitely doesn’t feel right.

But “when it’s right” does commence battle with “right fucking now” often. This is because I badly want it to happen. I’m impatient even though I know it will. At times the when and where seemed far off and unknown. Or it once did. A possible scenario has presented itself and I have dove all in. Maybe I dove a bit recklessly, and with minimal planning, but the course is set. I’m aiming for the Tokyo Dome in January 2022, if sooner presents itself (safely) I will take it in an instant. Can’t lie, the feeling of experiencing the Dome for the first time COMBINED being who I am at a wrestling event? I would be pinching myself so hard because I couldn’t imagine its reality and not another far off dream.

I can’t ignore the world is what it is, and I constantly live in the fear that’ll be the next thing taken away from me. That I’ll have to wait longer for my proper debut at a wrestling event. I hope not. Mentally I have to tell myself It’s happening because I can’t handle thinking otherwise. I’d be filled with dread up until that potentially crushing blow. Whether it does or not makes no difference in the long run.  I’m going to get that live wrestling event and it’ll be beautiful. I’m going to applaud, cheer, scream, laugh, and cry my fucking fangirl heart out at all that happens. Wrestlers and fans are going to get to meet and know me for the first time, and I hope I leave you all with positive experiences and memories of me. I know who I am, and I want you all to know me as well.

I lived a lie for nearly thirty-eight years, a lie that caused me grief, anxiety, mental anguish, and so many other issues. Some that may never go completely away, but I will tell you this. I am a diehard wrestling fan, I am a woman full of love and passion, and once those two get to meet up live, I may never come down from it. Yeah, that’s going to be the good shit.