This week on Wrestling Omakase we talk an awesome Tanahashi vs. Shingo match in New Japan, the build to NOAH’s long-awaited return to the Nippon Budokan and more!

The Wrestling Omakase Patreon is your best source for coverage of Japanese wrestling, from yesterday and today. Patrons get so much bonus audio that never hits the free feed, including two extra full length Omakase episodes per month, our shorter and yet still jampacked 1 Match episodes that each cover a certain theme (we just finished up the first part of our series watching every Tokyo Dome main event in order with an infamous disaster of a Hashimoto vs. Chono match that headlined the Weekly Pro Wrestling 13-promotion Bridge of Dreams show in 1995), ANIME OMAKASE, daily coverage of all the major Japanese tournaments, and so much more! You can get access to all of this and much more right now for only $5 at www.patreon.com/wrestlingomakase!

John is joined by returning guest Paul Volsch (@darth_dragon) as they start out with some rare current US wrestling coverage here on Omakase- namely some thoughts on what little they watched from the GCW Fight Forever 24-hour stream, and some last minute thoughts before the WWE Royal Rumble (and thoughts on some Rumble events from recent years past). They quickly shift gears to NJPW’s New Beginning in Nagoya event from this past Saturday, and spend a great deal of time breaking down the Shingo Takagi vs. Hiroshi Tanahashi NEVER title match main event in detail. They also discuss wildly diverging opinions on Ospreay-Kojima, Tenzan vs. O-Khan, O-Khan’s big night in general, compare Naito and Okada’s quiet tours, and look ahead to the rest of the New Beginning shows, including four more (!) Korakuens and the two New Beginning in Hiroshima events.

Then they turn their attention to Pro Wrestling NOAH with a full review of their 1/31 Higher Ground show from Korakuen Hall, the last big hype event for their upcoming return to the Nippon Budokan on 2/12. They break down all six matches, starting from the top with two strong main events and eventually working their way down to the rest of the undercard, and thoughts on how the company is using different guys right now (especially the “shooters”, but also some thoughts on the recent Inamura turn). They also preview all nine matches on NOAH’s big Budokan card and get into the rather confusing way the two halves of the card are split between pay-per-view and free streaming (not at all how you would expect!). Finally, they wrap things up with a pair of questions on DDT and the ShuPro awards and NAITO’S SPITTING. 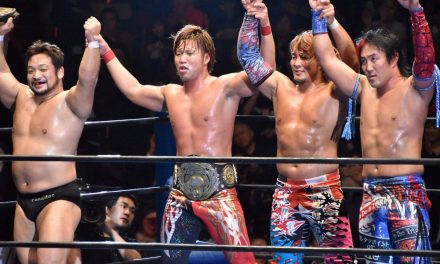