This week on Wrestling Omakase we review two shows from All Japan and New Japan, and break down what could be next for both companies!

The Wrestling Omakase Patreon is your best source for coverage of Japanese wrestling, from yesterday and today. Patrons get so much bonus audio that never hits the free feed, including two extra full length Omakase episodes per month (like a brand new 5 Matches Omakase that just dropped this past Monday!), our shorter and yet still jampacked 1 Match episodes that each cover a certain theme (right now talking all of the Tokyo Dome main events in order, with our last episode covering the famous BIG EGG WRESTLING UNIVERSE joshi show from 1994!), ANIME OMAKASE, daily coverage of all the major Japanese tournaments, and so much more! Plus, patrons can submit matches for John to cover in February! If there’s a match you always wanted to hear John talk about, come get your submission in now! You can get access to all of this and much more right now for only $5 at www.patreon.com/wrestlingomakase!

John is joined by returning guest Joey Bay (@joey_bay) as they start with some banter on what they’ve been up to lately (not much, of course) and reminisce on their trip to Japan together back in 2016, as well as subsequent trips. They then turn their attention to All Japan Pro Wrestling, as the episode’s main topic is a detailed review of AJPW’s 1/23 Korakuen show. John and Joey start at the top as they break down an awesome Suwama vs. Shotaro Ashino Triple Crown title match, discuss the somewhat-controversial decision for Suwama to retain, and give a great deal of thought on where both guys (and the company) might go from here. They also review the rest of the card including two more title matches, and go over some of the big names that came out to challenge the winners, as well as look ahead to upcoming matches that have already been booked for February.

Then they turn their attention to New Japan with a full review of their disappointing 1/23 Ota Ward Gym Show. John goes on Another ELP Rant™ but also breaks down an extremely odd New Beginning tour in general, and how some of the main feuds aren’t really working, leaving the lower feuds to feel like they’re carrying the company. They also touch on the other Korakuen shows (and which are worth your time and which aren’t) before previewing the upcoming New Beginning shows in Nagoya & Hiroshima, and speculate on some possible big matches for Castle Attack and beyond. Finally, they wrap things up with a quick mailbag featuring some questions on AJPW & NJPW alike. 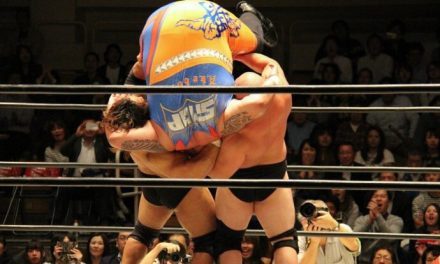