This is a Patreon-exclusive full episode. Sign up to the Wrestling Omakase Patreon now for just $5 a month to get access to it, along with:
-Our ongoing series covering every Tokyo Dome main event (not just NJPW and not just 1/4!) in order, which most recently featured NJPW’s 1/4/93 show with Genichiro Tenryu arriving to face Riki Choshu, and the final U-kei promotion to ever run the Dome on their own, Pro Wrestling Fujiwara Gumi!
-Our next 1 Match Series in February covering matches submitted by Omakase patrons, and if you join before the end of January you’ll be able to submit a match for the series too!
-Exclusive 2020 Year in Review episodes covering DDT and Joshi, along with the full results from our 2020 Omakase Patreon Awards!
-All of our 2020 tournament coverage: the G1 Climax, World Tag League & BOSJ from NJPW, Champion Carnival from AJPW, N-1 Victory from NOAH, the King of DDT & D-Ou GP from DDT, and the Princess Cup from Tokyo Joshi!
-Many previous Patreon-exclusive full episodes with Alan4L, Rich Kraetsch, Todd Martin, Chris Samsa, Nate from Everything Elite, Robin Reid from VOW Quiz Night, Garrett Kidney from Wednesday War Games, Mike Spears from Everything Elite/Open the Voice Gate and more!
-Two different series covering two awesome NJPW rivalries: Kazuchika Okada vs. Hiroshi Tanahashi and Tetsuya Naito vs. Tomohiro Ishii! Both have been completed, so follow along in chronological order as we discuss not just each match but also everything else all four guys were up to in New Japan at the time!
-Anime Omakase, our series exclusively on the world of anime!
-And much more!

It’s our first 5 Matches episode in a while, on the Omakase Patreon! If you haven’t listened to a 5 Matches episode yet, John and the guest each choose 2 matches to watch and talk about on the show. Then we each choose a third match, which is put up to a vote on the Patreon with the winner becoming our fifth match of the week. It’s a fun retro format featuring all sorts of different wrestling!

John is joined by returning guest Sean Sedor (@SASedor2994) from Voices of Wrestling, most known for his ROH coverage there (which certainly makes his match picks make sense). John discusses how this is the final Omakase episode in a major era, and Sean brings up another way it’s an end of an era too that they didn’t even think of. They then get right into the matches, which are:

Topics that come up along the way include: Sean explains the entire history of 2011 ROH for you if (like me) you weren’t watching them at that point, John really hates multi-person ladder matches, K-I-N-G KING, lots of blood, Michael Elgin is in the news lately but this became the Elgin Episode just by coincidence, Elgin’s weirdly great leg selling that he’d never really show in another match in his career, Naito bumps like a madman as always, a brief history of Naito’s incredible 2017 IC title reign, Steen saying things in his matches is fun, Jim Cornette gets fired, when finisher kickouts work vs. when they don’t work, Undertaker vs. Yokozuna is better than you think (at first!), ten heels can’t beat one (dead)man, “it would seem the power of the urn is escaping and perhaps with it The Undertaker’s power is leaving him as well”, Haikus by The Undertaker, when the first 5 minutes of the 2010 Tokyo Sports Best Bout award winner leave you wondering what the fuck they were thinking, and when the last 10 minutes make it exceptionally clear.

Missed any of the 5 Matches episodes or just want to revisit one of the matches discussed previously but aren’t sure what episode it took place on? Here’s a handy Google Doc with links to every single match we’ve discussed on this series so far, which will continue to be updated with every episode! 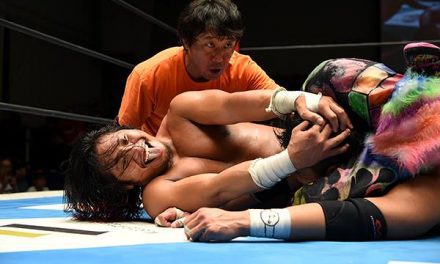 Emerald FlowShow #21: This Has Always Been a GLEAT Podcast