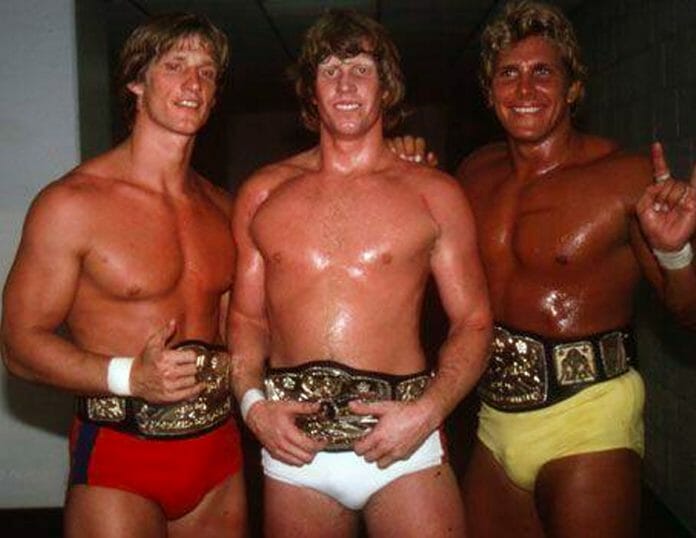 “We were really good in the ring and we were careful with our image. Lance was David Manning’s and my Dad’s idea. I especially was dead set against it because we had never lied to our fans.” – Kevin Von Erich.

That’s Kevin Von Erich talking about Lance Von Erich, an interesting part of pro wrestling history and the subject of the book “Lance by Chance”, written by the man himself, Lance Vaughan.

If you’ve been following wrestling for a while, you probably heard of the Von Erichs, the most famous wrestling family from Dallas, Texas and the awful events in their life, which were highlighted in a “Dark Side of the Ring” episode. All of the documentaries and stories always mention a small note, when Fritz Von Erich decided to bring a fake Von Erich to help with the cards and storylines while Mike Von Erich recovered from an injury. This kayfabe cousin was Lance Von Erich, and this book is the story of this maligned man clearing up his name and explaining what happened as honestly as he can.

Lance Von Erich, born Kevin Vaughan, was golfing with his girlfriend when he was spotted by David Manning, a referee and collaborator of WCCW and friend of Fritz Von Erich, who was impressed by his physique. He asked if Kevin had ever considered the wrestling business, he said no, and with the promise of making great money, he decided to go to the Dallas Sportatorium to see what it was all about. He met Fritz Von Erich, and told him the plan of making him into a Von Erich, the cousin of Kerry and Kevin. The plan was for Lance Von Erich to replace a sick Mike Von Erich while he recovered.

This autobiography is interesting and different from the other group of wrestling biographies due to the different set of circumstances. Lance was not a wrestling fan growing up, he’ll even admit to not knowing some of the big wrestlers, and he was literally picked because of his similarities to the Von Erich clan and his body. He treats the wrestling business as the latter word, just a business, one he got out of when he saw that he was not making the money he thought he deserved and it stopped being fun.

When Lance decided to leave WCCW, Fritz, Kerry, and Kevin publicly acknowledged that Lance was not really a Von Erich and buried him on their TV show. This burial of Lance Von Erich continued throughout the WWE produced documentaries and shoot interviews by other wrestlers and wrestling personalities, and Lance has an answer to everything that is thrown at him. He opens up about his relationship with Fritz, the promised money that only came once, the deadly 80s wrestling schedule that led to the break up of his personal life, and his responsibilities as a Von Erich, which weighed on him.

Lance never felt that Fritz respected him or acknowledged how much he did and how much he sacrificed for the promotion. One of the best parts of the book is his honesty and perspective of the wrestling business, coming from someone that came in from the outside and put into a huge spot.

One has to think of how he got there. For a wrestler chosen by circumstance and without that much knowledge, he was thrown to the deep end. He got straight to the spotlight as a Von Erich, who were mighty popular in Texas and even worldwide. WCCW was even transmitted in Israel and the company booked shows over there.  Lance had to deal with the pressure of the fans and had to learn how to wrestle fast. He got weeks of training in Dallas and then went to Portland with Don Owen to continue his training. He was called up almost a year later and started wrestling with the Freebirds, Bruiser Brody, Gino Hernandez, Chris Adams, and other big wrestlers in Texas at that time. That’s a lot of growing up in the business in a short time. He even had a match with Ric Flair.

While he admits that wrestling is not one hundred percent his thing, it did not stop him from becoming an international wrestler after he left WCCW and wrestling in South Africa, India, Israel, and even Puerto Rico. There are stories from wrestling in those areas. Through those countries he made other business connections, like acting and starting his own gyms in South Africa, which changed his life. This book is full of tales of Lance not only wrestling but dealing guns, almost being trampled by elephants, biking through Africa, making movies, and there is even a raid in a castle he was staying at. Lance had a wild and fun life.

If you don’t know much about the wrestling business in the ’80s, this book will give you an education on how territory wrestling worked, who went where and why, and you will get a lot of personal stories from all of the Von Erichs, Gino Hernandez, Chris Adams, Billy Jack Haynes, Dusty Wolfe, and other wrestlers of that era. It’s not the people that are discussed the most from this era and I appreciated that. It’s a lot of territory wrestlers, journeymen, getting their chance in the spotlight thanks to their association with Lance Von Erich.

“Lance By Chance” is Lance Von Erich’s opportunity to set the record straight of his time as a Von Erich and what really happened during this opportunity. As a reviewer and wrestling fan, I have to say that I understand why he did everything he did. This book is an interesting chapter in pro wrestling history, highlights territory wrestling and wrestling outside of the most well-known wrestling spots and the wrestlers that lived through it, plus you get crazy tales from Lance Vaughan’s life. Most important of all, it felt honest and it was honest in a way that it did not bury anyone. I respect what this man did and how he took every opportunity that life threw at him and became successful and happy as he could be.