This week on Wrestling Omakase it’s a compilation of our two live reaction shows after each night of NJPW Wrestle Kingdom 15, previously available exclusively for Patreon subscribers but now here on the free feed as well!

The Wrestling Omakase Patreon is your best source for coverage of Japanese wrestling, from yesterday and today. Again, patrons were able to listen to our Wrestle Kingdom 15 coverage LIVE after the end of each show, and they got to hear the audio back on demand a full 5 and 6 days before this hit the free feed. You can also check out our now-completed 2020 Year in Review series, with Patreon-exclusive episodes covering DDT and Joshi. Plus, check out our ongoing series covering every Tokyo Dome main event in order, continuing throughout the month of January, and you can submit matches for our second round of patron-picked 1 Match episodes, coming in February! You also get instant access to everything else we recorded during 2020 too- tournament coverage, shows covering every Okada-Tanahashi and Naito-Ishii matches in order, ANIME OMAKASE, and a whole lot more. You can get access to all of this right now for only $5 at www.patreon.com/wrestlingomakase!

John is joined by not one, not two, not three, but FOUR guests to break down two fantastic nights of Wrestle Kingdom! VOW contributors Chris Samsa (@TheChrisSamsa, also of course from Sport of Pro Wrestling), Jeff Andrews (@Jeff_andrews21) & Jon Hernandez (@FatmansAlright) and also Liam McCann (@liam_d_mccann) from the Super J-Cast discord are all on the line for both nights. They break down every single match and moment from two huge nights of Wrestle Kingdom, again each recorded just minutes after each show went off the air. Some major arguments about El Phantasmo, EVIL and the nature of heel heat break down toward the end of Night 1, and in both cases you can actually hear the energy escaping from our bodies in real time at 8 am on the east coast (without any sleep). A patron referred to them as “the Monster’s Ball matches of audio: five competitors unable to sleep for 24 hours and then released”, which is…..probably a compliment! It was definitely some unique audio, that is for sure! 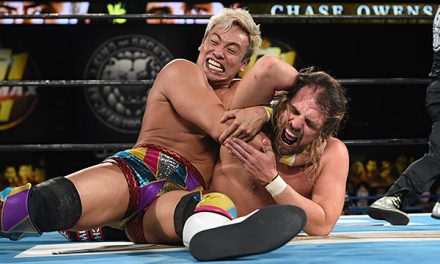