The Cleaner: Sweeping Away My Ignorance and Making Me A Fan

How incredible has Kenny Omega been? That’s rhetorical. He’s been awesome. I personally believe that shouldn’t be in doubt. I sometimes wonder though if someone out there still disagrees? Are there still reviewers, fans, journalists alike who do not see Omega the way the majority do? Are there still comparisons to his previous work in places such as DDT and NJPW and is his current work found lacking? If so, how has Omega responded? Sometimes the best response isn’t verbal, it’s taking action and showing them how wrong they are, throwing it in their face that he is as great as the majority says. Then I lean back and remember a previous time about myself. It causes me to pause before I get too judgmental about these hypothetical fans that may still linger. Before we get there let us look at present-day Omega a little bit more.

In 2020, Omega excelled in both tag and singles. His tag team combo with Adam Page was an incredible pairing both in wrestling, chemistry, and the storytelling that would come with it. As singles later in the year Omega instantly became a must-watch not just in his wrestling, but in his character work and development. Much to the chagrin of critics that somehow still exist, you should’ve heard them when he made the Wrestling Observer Hall of Fame, Kenny Omega was who many of us already knew he was, one of the best wrestlers in the world and perhaps one of the best wrestlers of 2020.

So it’s with a great confession I must admit I use to be one of those critics.

One of those blind critics who did not understand and did not realize how great Omega was. It is with this memory in mind I tell myself not to judge too harshly those who still may criticize, for I use to be right among them shouting my fool head off.

I want to take you back to the time Omega made his debut as “The Cleaner” in NJPW. I remember watching that show and dismissing what I saw instantly. I thought his look was ridiculous, his promo work did not excite me. I had heard the hype and the build did nothing to make me intrigued by the final product.

This was ignorance, I knew very little to zero of his previous work in DDT, PWG, ROH, and other companies. I knew little of exactly how knowledgeable and how creative and genius he was when it came to his storytelling and his character. What’s worse I didn’t do the work. Ignorance is easier than enlightenment, and in that particular instance, I gave into our worse instincts and behavior and chose the path of least resistance. I didn’t seek out his past work. I didn’t bother talking or inquiry with people who had watched him countless times and try to understand why they were all hyped and ready for this run in NJPW. I didn’t bother attempting to read his history or understand how he had gotten to this point. I had made my judgment and I double down on it hard. I could not get into Kenny Omega. I was unimpressed I would say. This wasn’t the huge deal I was lead to be.

This was not ignorance that was cleared up quickly. For over a year I held that line. Kenny Omega was overpriced and oversold. He may have been “The Cleaner” but I wanted to sweep himself into the dust bin and get himself out of my NJPW. Not even his best-received matches did nothing for me. I refuse to believe, admit, confess that Kenny Omega was great. When he entered the G1 Climax 2016 I scoffed at the idea of him being in it. I had no interest, no desire to see him before in this tournament I had grown to love and considered one of my yearly highlights. I would watch his matches, I’m a completionist, but I didn’t expect to be impressed by them.

During some matches I found myself saying to myself “that was good” and then shaking it off. I remember watching several matches and at the end of it going “That was a good match” or “That was a pretty great match” then I would dismiss it. You wrestle enough matches you could potentially have good and great matches eventually. Evidence kept getting present to me and just like a Trump Supporter I ignored them and substituted my own realities. Kenny Omega still wasn’t good, his opponents just excelled at making him great. Yes, that was it. Kenny’s opponents were going a step beyond to make him look good and fit in this tournament. Genius, I’m so smart!

What a fucking idiot I was.

The cracks turned into that wall of ignorance crumbling when he went up against Naito. The winner of that match got into the G1 Finals. I remember rooting for Naito, one because I thought he was the superior wrestler and two because my VOW Pick ‘Ems depended on them. The match started and then went on. As it went on I found myself leaning in further and further on my friend’s couch, sinking in deeper into the action, hanging on every move, every moment, every sequence. As this happened it occurred to me this wasn’t a carry job, Kenny Omega was working his ass off. While I know it’s silly in my mind it was almost like Kenny knew there was some jackass in Virginia who doubts you and needs you to shut them the fuck up. He failed to shut me the fuck up, because I kept gasping, muttering “holy shit”, and more impressively I began to realize with just one match, one incredible match what took me took long to know.

As the match reached a crescendo I realized even though I was rooting for Natio, I would totally be on board with a Kenny victory. His wrestling, his energy, his charisma had finally won me over. The Kenny Omega I had been told about was finally unfolding before my eyes and I could not turn away, could not ignore, could not disbelieve what I was seeing. Kenny Omega had won me over, and all it took was that damn match with Naito, the first Kenny Omega match I never shut up about, and my favorite match of 2016. Then he won the G1 in an incredible match with Goto and I wasn’t mad in the slightest. 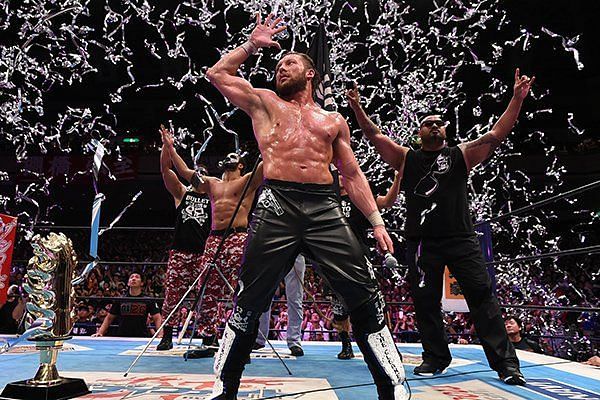 I was interested in how a potential Omega vs. Okada match at the Dome would go. Needless to say, that and all their subsequent matches were legendary.

As I watched Kenny Omega achieve another five-star affair with Rey Fenix last week on AEW Dynamite, I thought about how I don’t even question it anymore.

Sure, sometimes I’m not a fan of some decisions, some courses of actions, and he does have his occasional misses. But overall there is no doubt that Kenny Omega these days is one of my absolute favorite wrestlers. Where he goes I’m watching. I never give Impact even a first thought but when I know Omega is appearing, even just to talk, my ass is potentially tuning in. “The Cleaner” swept away my ignorance and made this girl a highly giddy fan of his. I look forward to more five-star performances, more excellent stories, and even more silly gnashing of teeth and bad faith arguments against him. I use to be among those voices singing against him but my voice wasn’t silenced, it just decided to sing a much better, much more enlightened tune.