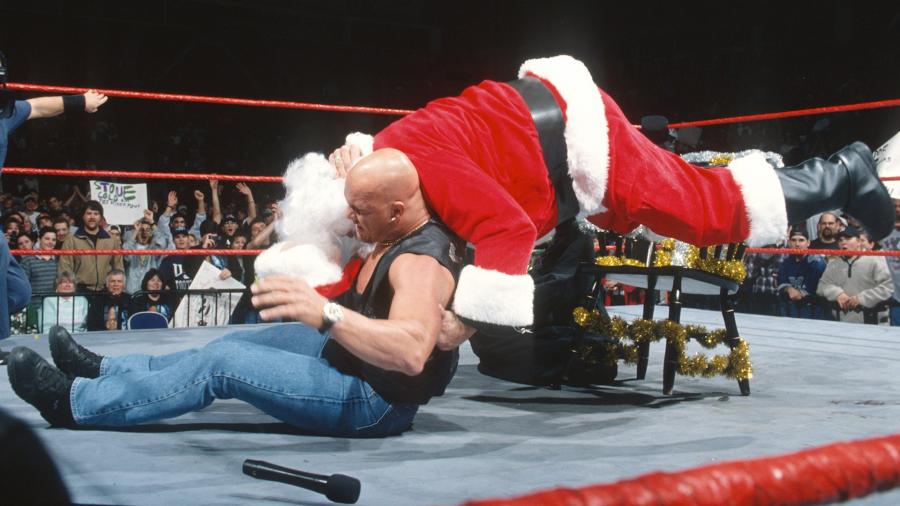 Read the introduction, history and Part 1 of VOW Secret Santa 2020 at voicesofwrestling.com/2020/12/14/vow-secret-santa-2020-part-1-introduction/. The brainchild of JR Goldberg (@wrestlingbubble), VOW Secret Santa sees all participating website contributors giving the greatest gift of all to their fellow VOW friends: a pro wrestling match!

In a year where I decided to watch more Japanese wrestling, Secret Santa gifted me Jun Akiyama against one of the men I have seen the most this year, Hiroshi Tanahashi. Curiously enough, this match had another person that I have seen the most this year, the referee Red Shoes, but younger! I have seen those two men more than my family and friends, I swear. To keep going on the topic of youth, this match had a Tanahashi not being the ace of NJPW, but an upstart. I don’t think that I have a pre 2012 Tanahashi match before. My experience watching Akiyama has been his matches with Kobashi.

This match had intense moments. It started with a test of strength, usual stuff, one that Akiyama won but a dropkick from Tanahashi took the match outside. Tanahashi tried to powerbomb him, but Akiyama reversed it. He decided to take the mat off the floor, yet, he ended up being the recipient of a DDT from Tanahashi on the exposed floor. Match went back into the ring, but the DDT did not kill Akiyama and it was a 2. A Piledriver on Tanahashi was not enough either for a two count. Akiyama took Tanahashi outside and threw him throat first into the rail, but this did not kill Tanahashi and he came back on the 19th count. An Exploder on Tanahashi gave him reversal status! Three German Suplexes on Akiyama was not enough to knock him down. Akiyama got tired of wrestling for 17 minutes and did two Exploders to finish killing Tanahashi.

I really enjoyed this since I had not seen Tanahashi giving his all and dying by the hands of a veteran before. His fire here was amazing and I loved how he just stood up from almost everything and even DDT’ed Akiyama on the floor. Akiyama was amazing as the killer and I should check out more of his matches. I liked his stuff with Kobashi and I enjoyed this encounter. Santa’s gift made me really happy, so I’ll give the match 4 candy canes out of 5.

What an awesome gift. I’ve seen this match before, but haven’t watched the full episode of television, which Jim Cornette has apparently called “the best hour of wrestling television ever”. This is an all-timer angle, something that doesn’t get old and just a perfect introduction into why people like me really just love episodic wrestling television from this time period. At this point, Mid-South was firing on all cylinders and this is one of the highest of highlights. To set this up, a visiting NWA World Heavyweight Champion Ric Flair is coming into the territory and was originally scheduled to be wrestling Butch Reed, who pinned him the week prior. Reed was attacked by Flair and Dick Slater, putting him into a neck brace and out of action. DiBiase gets the shot here, but before the match starts, Dick Murdoch comes into the ring and talks some shit and gets into it with DiBiase, brutally attacking him on the outside and bloodying him up and sending him to the back before we go to commercial. When we’re back, Hacksaw Duggan destroys a luchador in a squash match before we get a great promo from “Cowboy” Bill Watts explaining that Ted is receiving medical help and because he’s a MAN, he INSISTS that the fight will still happen, despite what Flair says. This turns DiBiase into an instant babyface, it’s that simple. Watts continually states the damage that was inflicted on DiBiase and if the pressure bandage on his forehead comes loose, that the match COULD get gory. This is the 80s, so baby – IT IS GONNA GET GORY.

I’m not one of those people that thinks booking wrestling is easy. It’s not, but getting over good wrestlers IS, and that is exactly what happens here. As the match starts, DiBiase is already bleeding through his bandage and comes across as the most likable underdog in history. Flair, for his part, is especially brutal early on – the likes of which we rarely see. The referee continually checks on DiBiase to make sure he can continue, which is very effective as both men began to just get covered in blood. Jim Ross, for his part on commentary, is vintage JR – just unbelievable at getting the valiant work of DiBiase over, “HE KICKED OUT!!!”. This is one of the best DiBiase performances ever, as even in the moments when he fights back and gets the upper-hand, like when he rolls an abdominal stretch down into a pin, he is too exhausted to even hold Flair down, and again when he whips out a powerslam for a weak pin attempt. DiBiase takes an insane bump over the top rope when Flair kicks off his spinning toe hold attempt, bashing his face on the railing outside. This leads to the eventual countout and Dick Murdoch is BACK OUT and takes it to DiBiase, culminating in a disgusting brainbuster on the concrete. DiBiase is done for, he’s a mess of blood, Flair is a mess of blood, the ring is covered in blood and the floor is covered in blood. I love it.

This was such a fun match to revisit, and for the first time in HD, as a complete episode on the WWE Network (or the whole angle on the Youtube link). This is not a MOVES match, it’s not even the best bloody brawl of November 1985, but it’s an all-time classic angle, and classic match. Like many of my favorite matches of all-time, what makes it work is the intensity that surrounds the match itself and permeates into the match while it’s happening. This easily goes into the list of best sub 10-minute matches. Thank you, Santa. FIVE BLOOOOOOODY RIIIIIIINGS.

As for who I think sent this to me, it really could be anybody, but whenever I get territory-era matches for this thing, I usually guess a handful of people and this time I’m going with the homie, Liam Byrne.

A little over two years before Cactus Jack and Triple H wrestled in a tremendous Street Fight in Madison Square Garden at Royal Rumble 2000, the pair wrestled in a similar no disqualification setting in the same exact building on an episode of Monday Night Raw. It’s a Falls Count Anywhere match, so Jack and Helmsley naturally fight around the arena, slamming each other into ring steps and onto the ramp. They use a few weapons, Jack takes a disgusting bump through a trashcan on the floor, then the whole thing ends with a piledriver through a table on the entrance way. A Masashi Takeda deathmatch it is not, but the crowd is really into it. It’s admittedly pretty hard not to feel any measure of childhood joy when Jack does the “Bang Bang!” taunt.

The match isn’t anything special when viewed through 2020 eyes, especially when the YouTube edit removes all the headshots with weapons, but for a 1997 Raw on the verge of the Attitude Era, it’s a peak into the direction the company would be going for the next few years; those “ECW! ECW!” chants as the brawl begins are more poignant than the fans chanting them may realize. It’s also the debut of the Cactus Jack character in the WWF, rounding out the Three Faces of Foley. The pre-match vignette where Dude Love and Mankind (sharing the screen through the use of Movie Magic™) reveal Jack as Helmsley’s opponent is one of the more famous of Foley’s career. And Triple H’s heated reaction at having to wrestle the maniacal Jack is a neat, albeit unintended prelude to the shocked look of horror on his face when Foley transformed into Jack on SmackDown for their 2000 feud. In fact the ’97 feud is itself somewhat of a prelude to the one in 2000. Foley helped get the Connecticut blue blood Helmsley over as a legitimate threat, then a few years later did the same thing with WWF Champion Triple H. So I think this is one of those cases where the historical context of the match is more important than the match itself.

As for who gave me this match, I’m gonna take a guess and say that it was Steve Case.

When I got this match, I was really excited. The Dudley Boyz are one of my favorite tag teams of all-time and ECW is a big blind spot. I’ve only seen a handful of matches and none of them with the Dudley Boyz. ECW is always something that I have wanted to do a watch on for a long time because the passion and talent that came through the ECW Arena in Philly is something to this day that I don’t think can be matched. The aesthetic of the molten hot crowd, wrestlers who all would seemingly die for Paul Heyman and the sub par production value that made you feel like they were producing this in their mom’s basement all made it feel special.

Right from the start, the ring announcer billed the Dudley Boyz as being undefeated and the undisputed tag team champions. I don’t know if that was canon or not but it got the crowd all riled up who were already chanting “F*** You D-Von” before the bell. The Eliminators come out (Perry Saturn and John Kronus) and I got some 2000’s WWF vibes when Saturn came in with the Radicalz. Kronos on the other hand I had never seen wrestle.

The match starts off with the Dudley Boyz’ manager hitting the Eliminators with a sign of some sort. They look at him and give him the high/low finisher Total Elimination to a massive reaction. As they soak it in, the Dudley Boyz come right on the offensive hitting big moves off the bat. A Bubba Bomb followed by a diving headbutt gives us our first near fall. Shortly thereafter, the Eliminators take over using a series of kicks and martial arts strikes. They get a pair of synchronized twisting splashes and a massive ECW chant breaks out in the arena.

With the champions outside the ring, Kronus flips Saturn outside the ring and then at his billed 265 pounds does a Sasuke Special onto the Dudley Boyz. All I can think of right now is that these guys would rule so hard in today’s New Japan. Big guys that can strike and high fly. They single out Buh Buh with a couple of strikes and hit their finisher for the pinfall victory and become the 3-time ECW Tag Team Champions.

This match was a quick 8-minute opener but it accomplished everything you could want. It culminated a (seemingly) hot feud, got the crowd molten hot and delivered an exciting match to set the tone for the rest of the show. 3.5 stars from me.

As for who picked this match for me? I’m going to guess Kevin Hare. 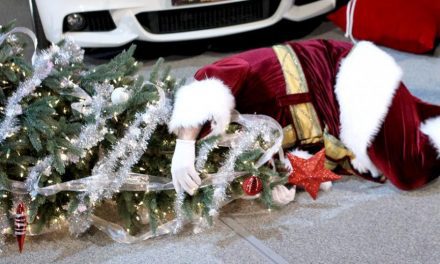 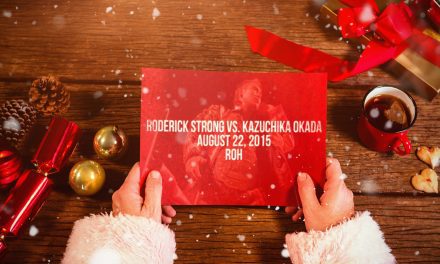 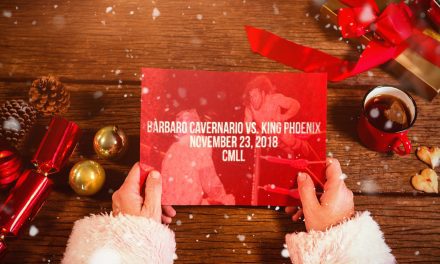