We finally got to see a lineup shuffle in the opener of a World Tag League card, as the young lion team of Gabriel Kidd and Yota Tsuji took on the veteran team of Satoshi Kojima and Tomoaki Honma. Of course, the outcome was never in doubt (as Kojima got the pin on Tsuji following a lariat), but the action was good from start to finish. The young lions worked well together at various points throughout, with both of them getting chances to shine. There’s nothing much else to say about this one, aside from the fact that it was Tsuji who ate the pin, and not Kidd (For sure it’s something that people like to pay attention to, just to see if they rank one young lion ahead of the other one). This match was as solid as you would expect. ***

This is the third time in this tournament that a Bullet Club team has jumped Dangerous Tekkers to get a match going, but I will give Zack Sabre Jr. some credit here. At least he came all the way down to the ring at the same time as Taichi this time (unlike the other two times). This match was just…..there. We got early brawling on the floor after the jump start from Bullet Club, and there were a couple of decent elements here and there, but for the most part, this was an average match. Towards the end of the bout, Dangerous Tekkers were able to block an attempt at the Grenade Launcher. After Fale got dumped to the floor following some miscommunication with Owens, Taichi and Zack were able to hit the Holy Zack Driver on Owens for the win. Even though this was by no means a bad match, it’s not something that’s really worth your time, unless you’re a big fan of Dangerous Tekkers. **1/2

With only one more World Tag League night left after this one (the second joint show of the tour), this match was pretty much a do-or-die situation for EVIL and Yujiro Takahashi. Their chances were already slim going in, but they basically had to win out (along with getting A TON of help) if they wanted any shot of getting into the Finals. Fortunately for us, that scenario didn’t play out, as Hirooki Goto and YOSHI-HASHI got the win after hitting the GVR on Yujiro. This was a relatively decent tag team encounter (certainly a step above the previous World Tag League match on this card). A lot of that had to do with Goto and YOSHI-HASHI, who continue to look impressive as a tag team. The side representing Bullet Club did manage to isolate Goto for a bit, but it turned into a more even fight once YOSHI-HASHI (who’s a pretty solid hot tag) came back in. Both Yujiro and Dick Togo tried to use their respective weapons (because of course they did), but neither attempt really worked. In the end, the CHAOS team won after hitting Yujiro with the GYR, which moved them up to 10 Points. Thankfully, EVIL and Yujiro were officially eliminated with this loss. ***

Tomohiro Ishii and Toru Yano came into the night in 1st Place, as the only team to have reached the 10 Point mark. They had a good chance to be the first team to get to 12 Points, but by the time this show was over, six of the ten teams in the tournament would be sitting tied for 1st at 10 Points. One of those teams was FinJuice, who got to that point after scoring a big victory over the tournament leaders. While this bout certainly won’t be considered amongst the best of the entire tournament, it was still a solid match from start to finish. Once again, the shenanigans with Yano were kept to a minimum, and the match benefited because of it. Of course, the exchanges that were the best involved Ishii, so that shouldn’t come as a surprise to anyone. FinJuice managed to hit a number of double team moves later on, but Yano answered with a couple of close rollup attempts. In the end, Finlay was able to trap Yano in a Granby Roll-style pin (hope I got the name of that move right) for the win. I really enjoyed how that match came down to two guys with amateur wrestling backgrounds, and it was Finlay who got the better of Yano. This was definitely better than the two previous tournament bouts on this card, even though it wasn’t a spectacular match by any means. FinJuice pretty much had to win this match to stay in the hunt for the top two, and with this being their third straight victory, they’re still very much in the mix. ***1/4

These two teams came into this match with 8 Points each, so while the loser wouldn’t be outright eliminated, they would need A LOT of things to go right on the last block night (pretty much a Double Count-Out or a Double DQ) to get into the Finals. When the dust settled, The Guerrillas Of Destiny would end up scoring the win via the same means they used to beat LIJ in Korakuen Hall….a referee distraction, a kendo stick shot from Jado, and a Gun Stun from Tama Tonga. I could kind of overlook the finish on that Korakuen Hall show, since the match with LIJ had been really good up to that point. Unfortunately, this match wasn’t nearly as good, and the fact that it was also the second time a G.O.D. match ended this way definitely took it down a couple of notices. The bulk of the match was relatively fine, but that’s all I can really say. Jeff Cobb and Tanga Loa had some solid exchanges, and we got a cool moment where Tanga Loa knocked The Great O-Khan off the turnbuckle and out of the ring when he was doing the spot where he poses while trapping his opponent in the corner. Those were really the only things worth remembering outside of the finish. Again, the wrestling was by no means bad, but it was hard to get invested in a match involving these two teams specifically. The fact that it went nearly sixteen minutes or so definitely didn’t help matters. This gets a Gentleman’s Three from me, but it’s not a match that I would say is worth the time to seek out. ***

I was honestly a little surprised that this got the main event spot. You would think they would’ve gone with two teams who were both still in contention. I guess that LIJ technically could’ve been put in that 8 Point danger zone along with The Empire, so this was definitely a must-win match for them. Anyway, up to this point, this show was easily one of the weakest World Tag League events to date. Fortunately, this main event absolutely delivered. While it just felt short of hitting great match territory, it was still a very strong bout that was miles better than anything else on this show. A big reason why this match was so good had to do with the interactions between Shingo Takago and Toa Henare. Much like in the tournament match with Ishii in Korakuen Hall, Henare immediately went after Shingo Takagi the first chance he got, and once it was clear that he wanted a fight, the NEVER Openweight Champion was more than happy to oblige. They had a number of hard-hitting exchanges throughout, but their battle in the final minutes was just awesome. SANADA and Tanahashi more than held up their end of things in this one as well, and as a whole, we saw some really good action from start to finish. Henare did get pinned following Last Of The Dragon, though he once again proved that he’s more than capable of hanging with the toughest of the tough in the NEVER Openweight Title division. He hasn’t gotten that big win yet, but Henare is getting closer, and I can’t wait to see him in more singles matches with the likes of Ishii and Shingo. ***3/4

This was one of the weakest World Tag League shows of the entire tour until we got to the main event. Of course, it goes without saying that LIJ vs. Hiroshi Tanahashi and Toa Henare is the only match from this show that’s worth a watch. While the rest of the show wasn’t terrible by any means, I can’t justify going back and checking out any of those other matches.

In terms of the World Tag League standings, the situation going into the final block night is that six teams are tied for 1st with 10 Points each. Since this is a one block tournament, that means two of these six teams will move on to the Finals in Budokan Hall. 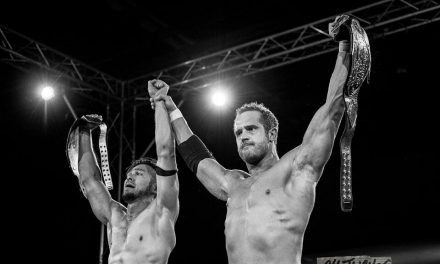 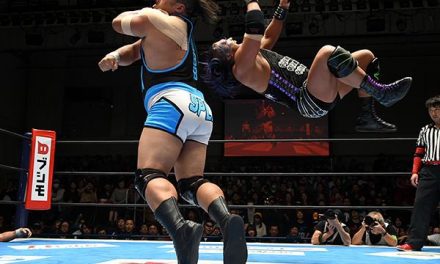