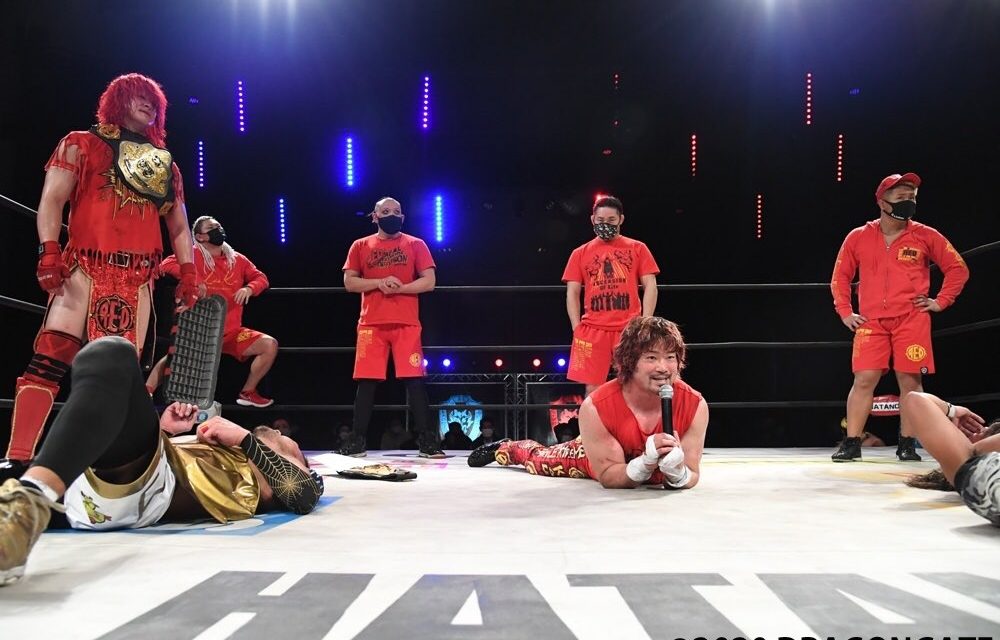 Ultimo Dragon, who was pulled off of Kobe World for precautionary health reasons, has adopted a closed-mouth mask. I truly enjoy the wrestling-related absurdities that have been enacted to #StopTheSpread.

Ultimo’s mask change was unfortunately the highlight of this opener. This had a lot of Gamma and Tominaga going at it. Way more than was needed. The only notable sequence they had was Gamma throwing a spinning wheel kick at Tominaga in the corner like this is Maeda vs. Fujinami from 1986. That is the only time that this match resembled the New Japan classic. Ultimo pinned Boku R Shimzu with the La Magistral Cradle. **

There was beauty in this match. For starters, it showed, to an extent, how timeless the Dragongate style has become. With MochiFujii representing the old school generation, Ben, Okuda, Maria, and Problem Dragon representing the current generation, and Kikuta and Kamei representing the future, these eight wrestlers were able to turn back the clock and do some old-school Toryumon multi-man spots and they all worked to perfection. This match should be used as a Dragongate primer. It wasn’t a high-end match, but they went through the motions of everything that makes DG special from the group test of strength to the multi-person suplex spot.

The finishing stretch, however, was far from a refreshing blast from the past. Despite falling in defeat, the fight that Kamei and Kikuta put towards the 50+ crowd of Fujii and Mochizuki signaled that the future is here. After cleaning the clocks of Yosuke Santa Maria and Problem Dragon with Discus Lariats, Kikuta went to do the same to Mochizuki. He was, however, met with a roundhouse kick to the arm for his troubles. I’m pleading with Dragnogate: give us MochiFujii vs. Kamei & Kikuta at Final Gate.

Kamei did everything he could to save his partner, but it was all for not. Don Fujii busted out the Nice German for the first time in a long time to pin Kikuta. This was the type of undercard fun that I am looking for. ***3/4

I know almost nothing about these four women. I know Chihiro Hashimoto is a tank and someone that I really need to watch more of, but outside of that, these names all looked vaguely familiar from staring at match listings, but I couldn’t pick them out of a lineup amidst their entrances.

DASH Chisako spent the majority of the match targeting Yurika Oka, leaving Hashimoto to square off with Manami. Both of these pairings rocked. This was as successful of an offer match as you could construct because it legitimately made me want to watch all four competitors on a more steady basis. I especially liked DASH slapping Oka in the face with no remorse whatsoever. That sort of stiffness would’ve been right at home in the prior match. Shockingly, Hashimoto, the current Sendai Girls World Champion and Tag Team Champion, was not on the winning side, as DASH took care of business on Oka and put her away with the Hormone Splash. Yes, the Hormone Splash. ***

Dragon Dia has snapped! After getting his mask ripped off at Kobe World, Dia returned and did the same thing to his foe, Dia Inferno. Dragon Dia attempted to rip the mask off of Dia Inferno and was subsequently disqualified when he shoved the referee away. It took Dia Inferno a minute to totally figure out how he was going to approach the in-ring aspect of his character, but now that he’s figured it out, I can’t get enough of him and Dia going at it. This feud feels really heated and I’m really intrigued as to when they’re finally going to go forward with the mask vs. mask match.

The disqualification didn’t stop Dragon Dia. He stormed around the ring until he saw an opening to go back after the R.E.D. trio. Dragon Dia and Dia Inferno brawled all the way to the back. Dragon Dia has evolved. He wants revenge. I’m into it.

This was more of a prolonged angle, similar to the Kobe World match. NR

This was not a great match, but it did not need to be. Since winning the Dream Gate earlier this month, Skywalker has spent his time on house shows winning non-competitive singles matches. He ran through Yosuke Santa Maria, Kagetora Punch Tominaga, Jimmy, and Madoka Kikuta before squaring off against Dragon Kid. For a seven minute bout, it’s fair to say that DK was in control for half of the match. Skywalker didn’t just walk into the ring and kill him, although that would’ve been an interesting scenario.

Skywalker was never in danger of losing, however. Not only is he building to the Ben-K Dream Gate bout at the end of December, but DK simply isn’t positioned as a strong enough threat to beat him at this stage in their careers.

There was a scary moment in this match when Skywalker caught DK out of a springboard dive and hoisted him up on his shoulders in a Death Valley Driver position. Skywalker stumbled backwards with DK on top of him, only for the ropes to break his fall. He was dangerously close to dumping DK over the top rope with what would’ve essentially been a shoot Attitude Adjustment.

It wouldn’t be a Shun Skywalker match if someone didn’t nearly die. Even now, there is a controlled chaos with Skywalker that keeps me on the edge of my seat the entire time. Seven minutes into the bout, he countered DK’s Bible attempt with the signature Skywalker SSW bomb for the win. ***1/4

With this win, the R.E.D. trio have made their second successful defense of the Open the Triangle Gate titles.

On the most recent Open the Voice Gate, I noted that the result of this match was not in question, but the specifici finish was. R.E.D. was obviously going to retain. The part that was up for debate was who SB Kento was going to submit. Was it going to be the go-to loss post Yasushi Kanda, the steady midcarder in Genki Horiguchi, or the ultra-protected Susumu Yokosuka? It turned out to be Yoksouka, because this is SBK’s house and no one is above him.

After tapping out Boku R Shimizu and Masato Yoshino earlier this month, SBK can now add Yokosuka to his list. This is a historically huge push for the 20 year old Nagoya-native. He’s been dominant. He’s the hottest act in Dragongate’s premier heel unit at the moment. He’s delivered in every situation that’s been asked of him and this was no different.

SBK was the star of this match. He and Horiguchi, a combo that will one day produce an excellent King of Gate match, tore it up early on. Once SBK took a backseat to Sakamoto and Yoshida, the match quality dipped. Neither of the big men were bad in this affair, but my interest level is forced to dip when SBK is not a part of the festivities. Luckily, he was back for the finish, and after Yokosuka ate a giant running knee from Sakamoto, SBK locked him in the SB Shooter and made the former Dream Gate Champion tap out. Put it on the board. ***

This is the first defense for the 50th Open the Twin Gate Champions.

YAMATO and KAI, after being the best of friends for such a long time, have been embroiled in a feud since September when KAI turned on him. They wrestled a prolonged angle at Gate of Destiny, YAMATO subbed in for an ill Jason Lee at World and fell short in his quest to win the Twin Gate belts with Jason Lee, and now they’re here, with YAMATO calling in his A-List tag partner, Kzy. We’re living in a strange universe where KAI and Kzy are two of the biggest stars Dragongate has. Try telling yourself that in 2015.

This match received top billing and it deserved it. This match felt big. The YAMATO/KAI feud has worked up to this point. KAI, the goofball heel, works. Unless YAMATO challenges Skywalker for the Dream Gate belt to kick off the new year, this is the biggest possible program for YAMATO at the moment. Their chemistry in this match was terrific. When KAI is on, every single thing he does looks really painful. His offense is stiff in a way that most wrestling isn’t in 2020. This was a peak KAI performance and YAMATO sold all of it wonderfully.

Even the KAI/Hulk team, which I don’t love on paper, has demonstrated that they have strong chemistry with one another. They rattled the brains of YAMATO with a double First Flash, just like they did at World. That move looks as damaging as anything in Dragongate at the moment.

Kzy took a secondary role to YAMATO in this bout. He was there as a second calvary for when R.E.D. was in control. They focused their attack on YAMATO but had to keep an eye out for Kzy. This match was nowhere near as smooth as a classic Twin Gate match. I brought my initial rating down because I couldn’t get past some strangeness in the opening half of this match. It didn’t flow together like an old SpeedMuscle match. This was disjointed and awkward at times, but the core of this match, the bulk of this work, was superb.

The good here outweighed the bad by a large degree. This was mean, hard-hitting, and pushed forward the YAMATO vs. KAI story. Well worth your time. ****

Gate of Origin maintained its role as a b-tier big event for Dragongate. Nothing on this show felt like a waste of time, while on the same token, nothing blew me away. This is a show for the hardcores and for people looking to follow the promotion on a more consistent basis, not necessarily one for people looking to dive in for the first time. Gate of Origin cements its status as the ultimate b-show, fluctuating between aggressively passable and at times, legitimately great wrestling Thumbs in the middle. 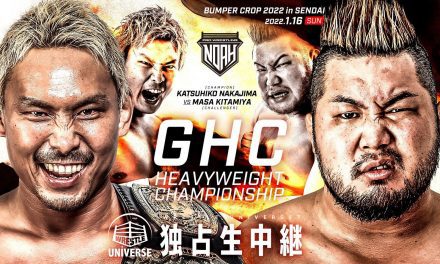