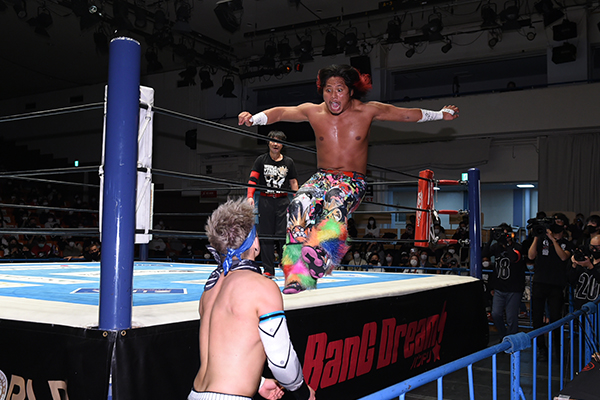 Well, here we are. Night six of the BOSJ as it chugs right along. This show could have a pretty great main event, and maybe we’ll be rewarded with something good out of the undercard as well! In any case, I won’t take up to much of your time with an intro let us get into this.

Basic opener we’ve been getting, which is neither a massive negative nor complaint. Just how it’s been going. While never high level (nor intended to be) they are a nice straightforward way to get things kicked off. Will never complain about Gabriel Kidd getting ring time for me to enjoy. Throw in the bonus of grumpy old guys and I’m not going to spend any time hating on it. In fact, everyone seems to want to put in work. Speaking of grumpy old guys watching Kojima and Nagata go at it still makes me smile and was probably my second favorite thing in this match. My favorite thing is Gabriel Kidd and his interactions with Kojima. It is clear he wants that win over Kojima, poor Kidd probably not going to get it though. Doesn’t matter, I love watching him and Kojima mixing it up and it makes me smile. Screw it, I probably liked this more than others are going to, but I thought it was a fun opener. I’m going to be giving with my rating, maybe this will bold well for the rest of the show! ***1/4

Yuya Uemura has been having a fun tournament, fun doesn’t amount to victories though. Taguchi has really shown his ass this tournament. No, that’s not a metaphor. Uemura throws a nice and very high dropkick. Fortunately for him, that’s not the only thing he has going for him, he’s just good and this tournament has been good for him and I thought this was a fun match with Taguchi. We got some good grappling to start the match, we got Uemura getting to showcase what he is currently capable of doing, and I thought they worked pretty well together in this match. Things started to pick up, and while they never made me seriously believe Uemura was capable of winning, I still thought had some good close calls anyway. They had good exchanges, the work was smooth, and Uemura showed an ability to keep fighting and escaping the submission until he gets caught and is no longer able to do so. Two-thirds through I was prepared to do slightly above three stars but once it was all said and done it earned it way nicely above that mark. They worked hard and should be rewarded for such an effort.  Also, zero Taguchi ass! Seriously, I thought this was a damn good first tournament match of the show. Hell, it almost was great to me. ***3/4

I pounded my coffee mug down and demanded “GIVE DOUKI A WIN”  at the start of this match splashing coffee all over me. Good times and a slight waste of coffee. When I saw DOUKI for the first time last year I never thought I’d be making that request, but he has won me over and now I demand satisfaction. While I didn’t enjoy the opening portion of this match with DOUKI in charge of everything, things would start to get better and pick up. Being stablemates didn’t stop the use of objects, the tight submission holds, and strikes from happening between these two friends. I really enjoyed this the more it went on. It started off blah, got good, and then just kept going in that direction without looking back. El Desperado was good but it was DOUKI who I believe showcased himself and worked his ass off to stand out. At one point DOUKI hits a monkey flip on El Desperado on the outer apron and it was at this moment I realize this match had sunk its hooks into me and wasn’t letting go. Alas, my demands were not met and Desperado wins in the end. I’ll never be satisfied. This match delivered for me though. ***1/2

Okay, what is Wato the master of? The Universe? Disaster? Karate and Friendship (For Everyone?). Enough of that, I am bothered with Wato being at the top of the points heap mix going into this match, I hope he doesn’t make it to the final two. If you’re Master Wato’s left arm you’re not having a good day as Sho focused on that in the opening portions of the match.  This was a step below the previous two matches though. I didn’t feel the same energy or urgency at first as I did the previous two matches. In fairness, the previous two matches involving two men desperately wanting to get a victory probably played into that. I am glad Sho’s arm work at the opening of the match was never forgotten in the rest of the match as limb work can be at times in certain matchups. Match began to pick up in energy a bit and I felt at the end of their efforts they put together a match that I ended up thinking was good. Sometimes you have to overcome your biases and pre-match notions you’re going to dislike something because of a participant and/or circumstance.  With that said I felt the previous two BOSJ matches were better when it is all said and done. ***1/4

I love BUSHI’s entrance mask. Ishimori’s entrance match is also adequately beast. **** 1/2 star rating on the mask game.  BUSHI and current-day Ishimori are two people I find very inconsistent. Sometimes they deliver something I really enjoy, but quite often I am disappointed. So I did my best to go into this match with zero expectations. Had a hard time getting into and focusing at first, even with the quick start, but I got more and more into it as the pace picked up and the audience clapping started to happen. Just like Sho in the last match Ishi had massive arm hatred and made poor BUSHI’s arm suffered for it at points during this match. BUSHI hits a jumping DDT on the outer apron at one point (With Ishimori dangling over the middle rope) and yes I cringed. Actually, BUSHI of the two is the person who kept my focus the most during this match pulling out what he could from his bag of tricks to pull off the victory. Alas, BUSHI has a roll-up attempt fantastically repelled and gets caught a little after the fifteen-minute mark. With that Ishimori finds himself on the top of the heap (for now) and I find myself adequately entertained. ***1/2

Main event time and I’ll admit I’m fangirl rooting hard for Robbie Eagles to get this victory going into it. How hard was I fangirling? I already updated Robbie Eagles standings total. DON’T MAKE ME HAVE TO READJUST THAT! Seconds after the opening exchange in this match I knew this was gonna be good. Now the question was could it achieve great? This match achieves a fantastic pace in the very early going ons of the match. The motivation both men have for this main event is rather obvious and bodes well as it continued on. Takahashi is in a mocking mood doing things such as the “Aussie, Aussie, Aussie” chant to taunt Eagles and goad him on. Eagles has a pep in his step and is fired up when he’s on offense and I love it. You just feel he wants, needs this victory as he hits his moves. A loss here eliminates him, and he cannot let that happen. A win against Takahashi, in general, is just a boost. Takahashi needs this victory because it puts him even with Ishimori, but he wants this victory because he’s Takahashi and he’s not going to let this fool no matter how talented get that big win.

The match never gets boring to me, even when it’s “slower’. After two matches of arm hate Eagles goes after the legs. We get good exchanges, counters, and sequences throughout as both competitors jockey for position and try to maintain it. You could tell this match was going to go over twenty, but it never felt drawn out to get there, nothing felt like it was there for padding or to extend shit just for the sake of extending. The crowd kept getting into it and never stopped. At one point Eagles hit a roll-up for a near fall I shouldn’t have fell for but I totally did. A good example of how they had drawn me into this contest. I also appreciate the leg work paying off as Takahashi goes for his flipping powerbomb on the outside but his leg gives way. Touches like that can make all the differences in a match. There is also a nasty turbo backpack on the outer apron which made me curse out loud for the first time this show.

Three paragraph territory now as the match continued. Eagles locks in a leg lock that I swore was going to be the end as Takahashi makes a fucking struggle of it and makes me feel like he’s getting ready to start taping at several points. Just awesome. This match started to approach twenty-five minutes but it didn’t feel it, a mark of everything clicking. They go into the closing stretch with Takahashi wanting that time bomb and then I feel my heartbreak as he finally gets it and ends one hell of a main event. With sadness I readjust the point totals to be accurate, but make no mistake Robbie Eagles in defeat won a hell of a lot in this match. Robbie Eagles is eliminated and Takahashi keeps equal with Ishimori. My favorite match of the tournament. The competition isn’t even that close. It delivered everything, except an Eagles victory. One day. Wait are you still reading? Fucking go watch this.  ****3/4

Wait, you’re still here? Didn’t you read what I said up above? the S The rest of the show is good, the crowd was great (For the Covid era) I had a good time with the show, but go watch this main fucking event right now. DO IT! 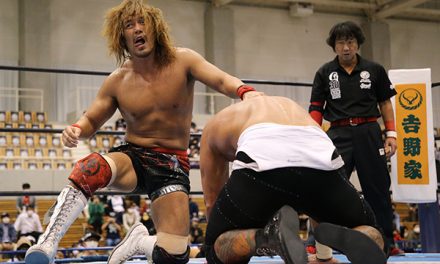