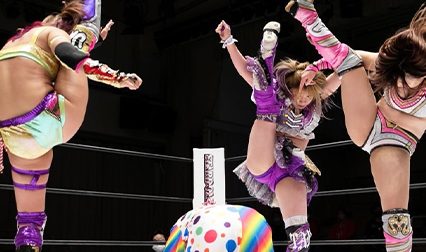 Just one day away from Sendai Cinderella Stardom visitors Korakuen Hall for Korakuen New Landscape.  We have two big title matches on tap for this show as well as the debut of Lady C and the reveal of ZZ.  With such a big show taking place just one day later it’ll be interesting to see if the Stardom roster delivers big here or leaves something in the tank for the Sendai Sun Plaza

Lady C’s video is just the number 177, because she is that many centimeters tall,  I love her already.  This was a solid match though and Lady C had some impressive moments, her choke slam in particular looks killer.  Lady C is the first Stardom trainee to debut since the departure of Kagetsu, the former trainer, so most people were expecting her to be very different than the last class of trainees, and while she is indeed different than the last class that’s mostly due to her being too tall to really be a dropkicks and forearms kind of rookie.  If she can put on some mass as her career goes on Lady C could have a spot on the roster alongside Himeka as the stronger/taller wrestler for the others to overcome. **1/2

This was the definition of fine.  Konami and Rina worked over Hina, hot tag to Riho, the usual.  Heel Konami is still enjoyable but everything else about this match was just formulaic.  It’s nice to see Oedo Tai actually winning at least. **1/2

Another fine match that made Himeka look good as she fended off two opponents.  It’s an odd dynamic seeing someone get a hot tag in a handicap match but that’s what happened here as RuakaMania briefly ran wild before falling to the Jumbo Princess. **1/2

This is exactly the kind of match this show needed, this was great from start to finish.  Mayu Iwatani being annoyed at Nakano usurping her and creating her Cosmic Angels sub-group was a neat story to tell and one that isn’t finished.  Iwatani was on her game in this match and was absolutely horrible to Sayaka while wrestling her, she didn’t take it easy on Nakano either.  The fracturing relationship between Nakano and Iwatani aside the Cosmic Angels work well together and they have some really fun offense.  Maybe I’m in a good mood but this might just be the match of the night. ****

Oedo Tai is on a roll as they capture the Artist Of Stardom Championships.  This was a result I saw coming as Stardom often gives these titles to acts that they’re starting to push as a way to build momentum.  While it took Bea returning for Stardom to finally care about giving Oedo Tai a spark it’s nice to have them actually act like a normal faction again.  Donna Del Mondo’s constant dominance has been a hot topic in 2020 but that seems to be slowly falling apart as they have lost a number of big matches recently and now only Giulia and Maika are left holding gold.

The war is far from over between these two factions who have very obvious tension between them, let’s hope the next time they face they can improve on this effort as this was a good match but I know they have a better one in them.  It was however quite odd seeing Syuri lose to Bea the day before she challenges her for the SWA title. ***1/2

This was a pretty good main event that fell just short of beating out Cosmic Angels vs STARS as the match of the show.  The closing stretch relied too heavily on the big move/2 count kick out formula and seemed to drag on longer than necessary which took this down a notch.

I expected Hayashishita to pin Watanabe for the first time ahead of her World title match at Sendai but instead, she pinned AZM.  Hayashishita didn’t need to pin Watanabe though as her booking ever since the restart has been really good and she goes into Sendai Cinderella as a very credible threat to Mayu Iwatani’s title. ***3/4

This show was a real tale of two halves, the first three matches were uninspired and bland but the latter three kicked things into high gear and really saved this show.  The crowd was one of the bigger attendances Stardom has had at Korakuen Hall lately which lent to a pretty good atmosphere which always bumps up my enjoyment of these shows.  It remains to be seen if Sendai Cinderella can best this but I’m confident that stacked card can deliver. 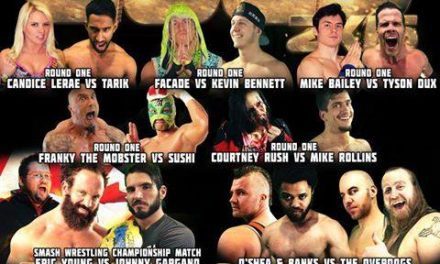