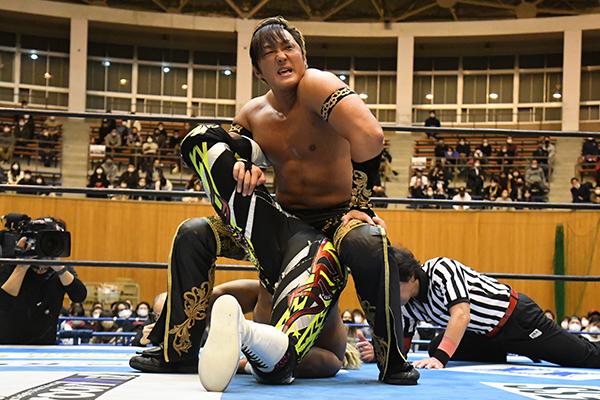 The World Tag League is off and running. Yay?

Yes I know, the level of excitement for the World Tag League is never what you’d call extraordinary, but it is going down therefore we here at Voices of Wrestling are reviewing it. Yay? Okay, enough sarcasm there are some good teams here, there are also some not-good teams here so we have what is a potential mixture of decent to good matches mixed with “well that sure exists”. Teammates putting in all the effort to make up for their other partner’s subdue attempt at putting in an effort. It’s not the greatest tournament in the world, but at times you do dig up a gem. Let see if today’s show has any gems!

Young Lion openers are always my jam. NJPW has a fine crop of them right now, and they continue to grow and improve despite this ongoing pandemic. As for this match, it’s the good solid Young Lion stuff you come to expect. By now Tsuji and Kidd know how to gel and work well with each other and are able to produce solid bouts each outing. Never goes too long, they fit in a complete match in the short amount given.  Rinse, wash, repeat. It helps that neither seems to be ever having a ‘night off’ match when they get a chance to open these shows and showcase themselves a bit more. I always say never skip Young Lion. Sure this match isn’t high-end or anything, but you’ll miss out on watching these wrestlers work on improving, updating, showcasing their craft and that would be a shame.  ***

The one thing I like about G.O.D matches is I get to hear their theme song. You got to find the good where you can get it. I am still not used to clean-shaven Tama by any stretch. He looks so much younger. As for the overall match, it happened, and I watched it. G.O.D has been in good matches but it takes a bit for that to be achieved. Chase is good but Bad Luck Fale is .. . .Bad Luck Fale. Mix that all together and you get quite the average recipe. Chase got abused for an extended period, none of it interesting. Fale would come in and things would surprisingly pick up. Not enough to make me care, but at least Fale seemed to try. The second half of this affair was definitely better than the first half, but neither half is particularly something you need or want to see. Chase gets submitted and I move on with my life. **3/4

Okay, props to the improvements made to The Great O-Khan’s appearance. I’m down with this. This match ended up slightly in the fun category. At times with the World Tag League, you take that when it’s given to you. There was a feeling of effort and a bit of energy in this match.  Poor YOSHI-HASHI took the brunt of the abuse in the first portions of the match with Cobb and O-Khan both getting to look solid as they took turns abusing him. Goto eventually gets in and while he brings some fire it doesn’t take long for his turn to take abuse as well. The match moves along nicely (ten minutes don’t feel like ten minutes) and while I appreciate YOSHI-HASHI and Goto weathering the abuse to find a way to win, not sure how I feel about The Great O-Khan being the one to take the pinfall. Then again you could argue Cobb shouldn’t be taking them either. After squashing Tanahashi/Henare yesterday them losing here feels like quite the step back. I personally won’t complain because I love the Goto/YOSHI-HASHI tag team and root for them, but that said, unsure this was the right call. ***

Is it wrong that I typed “Ugh, this match happened” before I even watched it? If it is, too bad because it was spot on. If this match was a title to a Michael Jackson Album it would be “Bad”. Yes, that joke isn’t good but neither is this match. I give back the effort I’m getting. If I’m going to give credit for anything it’s that Juice is one of the better wrestlers at engaging and interacting with the “clapping only” audience. Yujiro has gone from “not as terrible as usual” in the G-1 to downgrading himself back to “Nope, I’m back to as terrible as usual.” The status quo is returning, nature is healing. At least this match is under fifteen minutes. Juice gets some more credit as he did do his best to bring life into this match, and managed to do so. Hell, what succeeds in putting this match in two-star territory is that Finlay and Juice work their butt off for it to happen. Alas, EVIL exists in this match which means eventually we get a ref bump, a low blow and that’s a wrap. Ugh, this match happened. **1/4

When I saw that Shingo and Ishii were going to be on opposite ends in this match, I knew if nothing else I would enjoy that. This theory was proven correct. I thought this match ended up fine. There is a price to pay, and the price to pay is Yano doing “Just Yano things”. Not being able to figure out the paradise lock is funny so maybe I shouldn’t be too harsh. Yano not being able to apply the paradise lock is way more entertaining than SANADA actually putting it on. When the Shingo and Ishii interactions finally happen my patience is rewarded. Shingo and Ishii are definitely one of my jams. Time moves along nicely this match, and everyone contributes nicely. Yes, that is me admitting that Yano contributions played their part in the enjoyment of this match. Enjoy that, I won’t confess to that often. Shingo and SANADA are not that bad of a team, and I remember that I rather enjoy SANADA as a tag team wrestler. The first match to just BARELY make it over the three-star mark. ***1/4

Henare rules, and in this match, he rules. This is a very fun and entertaining main event and Heare is a big part of why that is. From the very opening moments of this match, Henare was fired up and ready to kick some ass. Zack and Taichi are a proven tag team commodity and one of the teams you’re going to keep on depending on for quality in this tournament. They love to go after Tanahashi and not surprisingly they target him hard, especially his leg. While everything else on this show went roughly 12 minutes or under, this got some time to go, and I’m glad for it. It went almost twenty minutes and I never felt like I was wanting to hurry up and be over with already (Something I can’t say for a couple of matches that went less than that on the undercard). Tanahashi does quite the good face in peril against Zack and Taichi and when Henare finally gets back in the match, oh yes it’s good shit.

Henare feels like he’s on a mission to show what the fuck he can do, and if so then mission accomplished. Henare takes a match that was solid and turns it into a main even that while it doesn’t break into four-star territory, it gets closer than anything else on this show. Nothing against Tanahashi but he clearly took quite a few steps back and let Henare carry the load in this match. Carry it he did, although in the end the conclusion that is going to happen to many Tanahashi/Henare matches happened and Henare took the fall. That’s not a knock on him though. Henare came to work, and he worked his ass off and he elevated a match on a show that really needed a match you could point to and go this was really good. This was really good. Henare was really good. ***3/4

While not a “go out of your way to watch” match, the main event is really fun and Henare deserves credit for that. The undercard, some of it was fine, some of it was awful, none of it memorable, all of it forgettable. 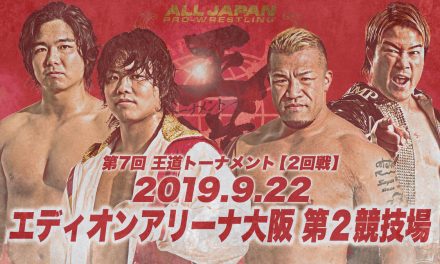