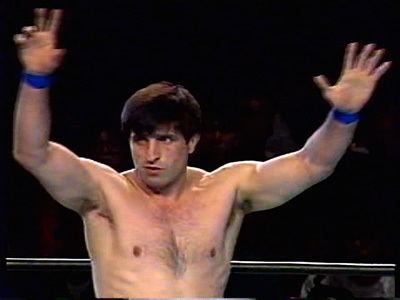 The collection of matches and segments I am watching for this series come from a yearbook curated by goodhelmet, a longtime poster at the Death Valley Driver Forum and other wrestling places. A cross-section of the best (and worst of wrestling within a certain year), it is a great snapshot of everything of importance. The footage is taken from the August 20-21.

A varied couple of days of action towards the tail end of August sees trips to All Japan, RINGS, AAA and GWF of all places. A strong selection on paper largely delivered, especially as I saw some of the best shootfighting I’ve seen the whole year.

We begin things with a huge six man tag team match in All Japan as Mitsuharu Misawa, Toshiaki Kawada and Tsuyoshi Kikuchi take on Jumbo Tsuruta, Akira Taue and Yoshinari Ogawa. I’m not always as high on AJPW as some people are, yet I was excited to see what these six had to offer as they were all so good in their respective roles during multiman matches. Immediately, the tone was set by Ogawa and Kikuchi going hold for hold, only for Tsuruta to come in and almost kick Kikuchi’s head off. However, the young pretender to the bitter and grump crown, Taue, wasn’t as capable as his mentor and found himself overwhelmed by both Misawa and Kawada as the pecking order was largely established. This was particularly fun when you had moments like Kikuchi trying to take the fight to Tsuruta, his fight almost immediately cut off with a barrage of knees to the face.

As things settle down, it was initially Ogawa who found himself isolated (including a nifty modified cloverleaf by Kikuchi), though it wasn’t surprising to see Kikuchi the eventual recipient of a beatdown. The crowd don’t like the abuse meted out to Kikuchi, booing Taue for slams that end up dumping him on the top rope and into the turnbuckle respectively. The pairings were nicely established as Misawa took the fight to Tsuruta, before Taue and Kawada engaged in some mid-ring brawling as Taue tried to save his mentor. Later on, this animosity spilled out to ringside where Kawada slammed Taue over the barrier. Unfortunately, that left Kikuchi isolated with Tsuruta, a backdrop driver ending the night for the plucky underdog. A fun match that had each component part build a better whole.

An interesting set of names if nothing else is what I’m immediately offered by the first of two matches from RINGS: Grom Zaza taking on Shtorm Koba. Having never heard of either man, my hope is that this match is on the set due to its quality over and above historical significance. However, my lack of knowledge on RINGS means I could be watching something that is much more noteworthy. I immediately warmed to Zaza with a leaping takedown and attempted throw within the opening minute. To give Koba his due, he was soon trying his best to chuck Zaza around as well, even going as far as to use a form of modified press slam!

There was very little wasted motion or moments with submissions, strikes and slams all finding their way into an evenly contested battle. It helped that the fans were really into everything, especially the work on the ground as both men battled for superiority. Eventually, it was Zaza who came out on top with a full nelson-style submission hold. Clocking in at just over ten minutes, this was shoot-fighting I could really get behind.

What the show also offered me was another chance to see Volk Han in action as he took on Dick Vrij in the semi-main event. When I mentioned how much the fans were into things for the Zaza/Koba match, I wasn’t reckoning upon them finding another level as they are hugely into Han, a passion assisted by the ridiculously quick start to the contest as Han came close to a submission with an early leglock. Vrij’s best chance seemed to come from his legkicks which do knock Han down early, yet it only halted the onslaught for the briefest of moments before two quick rope escapes were needed to avoid a Han submission.

Han wasn’t having it all his own way though as he was almost counted out following a Vrij knee right up the middle had him down for eight, as does a spinning backfist. Every strike by Vrij had a chance to take Han out and it became a case of whether he could survive long enough to defeat the bigger and seemingly stronger man. In a dramatic turnaround, Vrij went for a kick to the head for a knockout, only for Han to trip him and turn it into a leglock for the victory. The crowd (and I) lost my shit at this – sooo good. Like a Rocky film come to life.

There were a lot of people and feathers in the ring as we headed over to AAA for a six man match that saw the team of Solar, Super Astro, and Angel Azteca take on Rambo, La Parca (if the graphic is anything to go by) and Blue Panther. Though I’m not always the biggest fan of lucha, the early trading of holds and arm-based takedowns between Blue Panther and Solar was a beauty to watch. So smooth and inventive, finished with a handshake as each man showed their respect for the other. The tecnicos took the primera caida with Astro, another standout of the whole match, taking out Rambo with a cartwheel back headbutt out of nowhere before Azteca finished Parka with a missile dropkick

In the segunda caida, an early bit of fun with Astro dancing with the rudos soon fell by the wayside as Azteca took the brunt of some double and triple teaming from his opponents. As is often to be expected from these lucha contests, a mask ended up getting ripped as Panther riled the crowd up by tearing at the eye of Azteca. A spinkick by Parka apparently ended the fall as he pinned Solar, though no other obvious fall takes place and the initial introductions had Azteca as the captain.

Things had completely fallen apart by the tercera caida, not helped by the increasing involvement of the rudo referee. As the official blocked several attempts by Azteca to punch Panther in particular, all six men ended up in the ring and it was soon Panther’s mask that was under threat. The highlight spot of the contest was a beautiful rolling senton by Astro to the outside on Rambo, before the third fall was tied up as first Parka and then Solar were ‘eliminated’. The two men who had been most fired up to battle, Azteca and Panther, went at it to finish, Azteca taking the tercera with a huracanrana. An excellent match that had a little bit of everything as far as lucha goes. Well worth the watch.

It is easy to be skeptical about many things in wrestling, though I’m not entirely sure why I am so put out by Manny Fernandez and Butch Reed being listed at the same weight in their Global Wrestling Federation singles contest. Not that they are massively different, just that I think it is ridiculously convenient and it is often the little things that make it easy to break the sense of disbelief. Reed in 1984 was golden, but I’m much less interested in seeing him in 1992 even only relatively shortly after a run in WCW. Weirdly, Reed was playing the face even though by this point in his career he was much better as a heel. The narrative was all about Fernandez’s arm/shoulder as he collided with the ringpost twice, once following a missed shoulder charge in the ring and the second time an errant clothesline at ringside. This unfortunately meant that long swathes of the first half were given over to a Reed seated armbar.

As the tide turned, Fernandez began to work on Reed’s neck. All of the action was solid, if unspectacular, what you might expect from two veteran workers on the downside of their respective careers. The matwork also meant that things felt like they dragged a fair bit. They build to the sleeper arm drop and subsequent face comeback and another crowd-pleasing spot as Fernandez was slammed off of the top turnbuckle. At least the match having gone to the ringside area meant that when it headed there again and saw the things end in a double countout, it felt more natural than contrived. This was a pretty average to good contest that will leave little lasting impression.

A really good selection of matches, especially from RINGS and AAA. I pinpoint those primarily as they are not usually my style of wrestling when it comes to personal enjoyment, but the three matches from those two events delivered in spades. Join me next week as I continued to see the best and worst of 1992 as That Was The Year That Was.