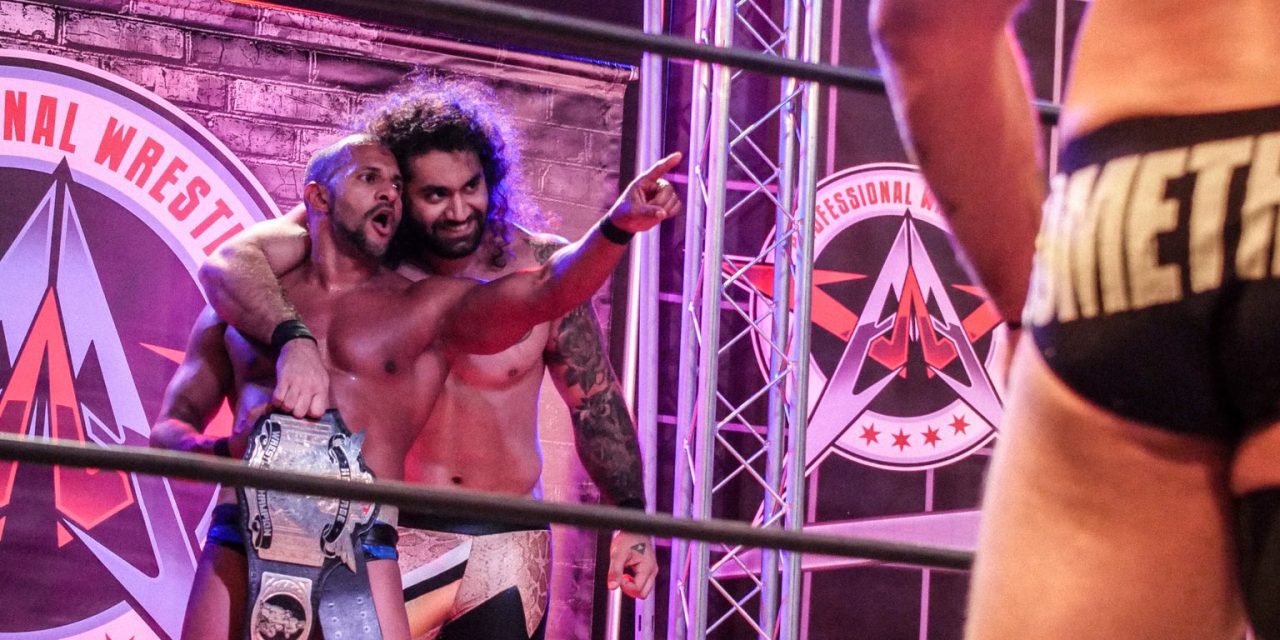 Ace Romero scored the pinfall in an unannounced four-way to kick off the show. I’ve applauded AAW in the past for using Romero better than any other promotion he works for. When he first got brought into the fold, I wrote him off as an undercard gimmick wrestler who would flame out sooner rather than later. Romero proved me wrong. He’s continuing to get in better shape and as a result, his in-ring has improved. He’s become a homegrown star in AAW and it’s been great to see.

Romero squared off against three pasty white guys who were thrown around the ring with ease. It was a strong showcase for the established Romero and the debuting Brayden Lee, who was the easy highlight of this match. Lee is an IWA-MS mainstay who just recently got an opportunity in Game Changer and Black Label Pro. I would encourage any midwest indie not booking him to get on it. Lee has a great body and a foundation that he can only build upon. I hope AAW brings him back when they get the opportunity.

The simplistic match layout worked in everyone’s favor. Romero looked like a beast while not diminishing any of his opponents. A fun way to kick off the show. ***1/4

Manders was cutting a backstage promo when Ace Perry interrupted him. They challenged each other to a match for later on in the night.

These two quickly established the dynamic of the match, with the bigger Sierra dominating the younger, pluckier Blue. Both of these workers have their moments when they look really strong. For Sierra, it was her running knee to the kneeling Blue. Sierra delivered the move with great force and Blue whipped her head back beautifully. For Blue, it was her counters to the stronger Sierra. She works great from underneath, and her pluckiness eventually scored for the fall with a standing Sliced Bread. **3/4

AAW produced a Fred Yehi vignette that can only be described as a homerun.

One might say Fred Yehi has his head in the game for his match against ACH tonight at #AAWALIVE.@fredyehi

After a prolonged cat-and-mouse game, Manders finally put Ace Perry away with the Hawkeye Stampede. The work in this match was competent, but I fear that this hurt Manders more than it helped Ace Perry. I really thought Manders, who made a strong debut at the first AAW Alive show, would steamroll through the smaller Perry who is consistently on AAW’s undercard. Instead, these two had a long match that saw Perry kick out of multiple big moves. I buy that Manders could one day headline an AAW show. I don’t get that vibe from Perry.

I’m conflicted about this match because the work was really strong, arguably the best I’ve ever seen from Perry, but I don’t know if this situation called for a great match. He kicked out of too many of Manders’ moves for my comfort. The work was strong, but the story was wrong. ***

ACH remarks that 2020 has not been a good year for anyone. He is correct. ACH promised that even though he was off his game during his last AAW appearance way back when in February, but he’s back to his old self and he wants to even things up with Fred Yehi, who beat him in January.

ACH has been touring the indies recently as a veteran presence that is unimpressed by the current frills in the scene. Yehi is one of the few men on the scene today that can go toe-to-toe with ACH. ACH has evolved past the smiley, happy-to-be-here portion of his career as he’s transitioned into a viable ass-kicker, but Yehi is somehow stronger and more imposing.

The work here was deliberate. It’s hard to imagine that this ACH is the same guy who ripped through the NOAH Jr. Tag League and became a beloved figure in Japan thanks in part to his high-flying. This match was entirely ground, both in the sense that they not only kept things on the canvas, but they kept the offense rooted in reality. Yehi brought a big fight mentality to this match and ACH matched him in intensity. This is the type of match that I think works well in an empty arena, or near-empty arena setting. Every strike echoed throughout the building. Every hold was given a chance to breathe. If this is the next stage of ACH’s career, this is a stage that I will gladly welcome.

After escaping the Koji Clutch, ACH rapidly transitioned into a brainbuster and looked to have Yehi pinned. Right as he went to lay across Yehi, the bell rang, marking the 20-minute time limit. Those 20 minutes flew by.

Yehi offered a handshake to ACH and then flipped him off as ACH went to extend his hand. Yehi’s character work has become a welcome addition to AAW and since ACH returned to the fold last fall, ACH has routinely been the highlight of each show. ****

All dynasties must come to an end eventually. Matthew Justice had been batting 1.000 in AAW prior to this match. While I applaud the effort that he and Crist put in, Crist is not cut out for singles work at this level and the brawling in this match lacked the heat and intensity that the usual Justice offering includes. Justice is normally able to turn back the clock to create some Arena-era ECW brawling, but this had the same vibe as other contemporary garbage wrestling.

Crist scored with an ace crusher off of the stage through two doors which looked horribly painful for both men, but that wasn’t enough to salvage this. Too long with too little heat. **1/2

Myron Reed was announced for the November 12 show.

Kevin Kellam attempts to interview Stephen Wolf but Wolf quickly corrects him by announcing himself as Mr. Stephen Wolf. He put over his ongoing feud with Trey Miguel while hyping up his match with Blake Christian.

Stephen Wolf, who made his calling teaming with Trey Miguel in AAW as a young, flippy team, changed his in-ring style completely to ground the high-flying Blake Christian. The youngster battled back and caught Wolf with a dive from the ring to the entrance ramp, which was the opening he needed. He rode that momentum into a flash pin and scored the fall on Wolf.

This was a strong introduction for Blake Christian, who’s made his name in the scene as a reckless flyer who isn’t afraid to do anything. I think he’s a better wrestler when he has a clear structure, like his work in NJPW Strong, and this match certainly borrowed more from that style than it did his Game Changer scrambles. Wolf not only looked dominant, but he looked credible in doing so, in large part due to Christian’s selling. This is not the match I expected either of these men to have when the bout was announced, but this proved to be a worthwhile affair.

After the match, Wolf attacked Christian, further establishing his new persona. His new act is a welcome addition to the roster. He’s upped his game and now comes across like a more viable and credible wrestler than he did during his time as a team with Miguel. ***1/4

Mad Man Fulton is truly an impressive force. He’s a head taller than the next tallest guy on the roster. He and Austin are a fun Diesel-Michaels-esque tag team. It’s the best use of Austin, who has a ton of talent but doesn’t pop off the screen as a singles star. Fulton gives him the credibility and the charisma that he needs to reach his full potential.

The roadblock with Austin and Fulton is going to be their in-ring work. They looked great as a team last month when they won the titles, but the match itself was on the lower end of what The Besties are capable of. Tonight, they were involved in a disjointed mess with Gringo Loco and Angel Dorado.

Given that Loco and Dorado aren’t a usual team, their chemistry was off. They did not have the usual crispness that Dorado and his injured partner Air Wolf have. It seemed like these two teams had a lot of ideas and struggled executing any of them. This was a rare disappointment from four guys that I can usually trust to deliver. **3/4

Mance Warner and Jake Something cut an excellent promo, promising to team with one another tonight and then “figure out the rest” at a later date.

I’m currently detached from the world of Impact Wrestling, but people I trust say that Hakim Zane, who goes by Rohit Raju in that territory, does not jump off the screen. I find that hard to believe as he jumps off the screen like a savage on these shows. His act with Karam, while rooted in overdone indie wrestling tropes with promos on “smart fans”, has been executed to perfection.

He’s delivered better matches in AAW than this one, but this match, even in a near-empty arena, exploded with star power. This is the current era of AAW in a nutshell. Warner is a fighting champion, Something is an established veteran, and Zane & Karam are tormenting everyone in sight. It’s a simple formula that plays well at the top of the card.

Zane scored the fall on Warner, meaning the Heritage Champion pinned the Heavyweight Champion. As announcer Joe Dombrowski pointed out, there’s no end in sight for AAW’s empty arena days. Zane vs. Warner in a title vs. title setting is something that deserves an audience, but it would appear that they might not get that. If they decide to go in that direction, the promos will surely be top-notch. ***1/4

AAW’s second outing in the COVID-stricken universe proved to be a success. There is an aura of class and professionalism throughout these AAW shows that is so often absent from the current indie scene. As always, their backstage segments and vignettes came across top-notch. While the card lacked a consistent string of high points, ACH vs. Yehi survived as a reminder that even with virtually no audience, wrestlers at the top of their game can deliver a truly great match. This show is worth checking out because of that match alone. Regular AAW viewers will appreciate the storytelling throughout the card, whether it’s with Stephen Wolf, Ace Austin & Mad Man Fulton, or the main event scene with Zane, Karam, and Warner. 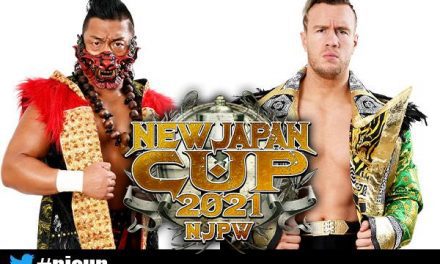 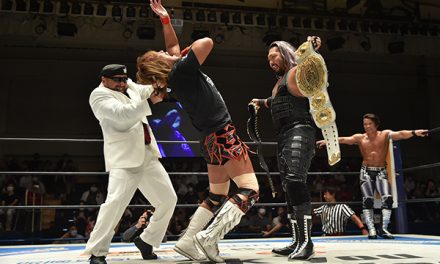