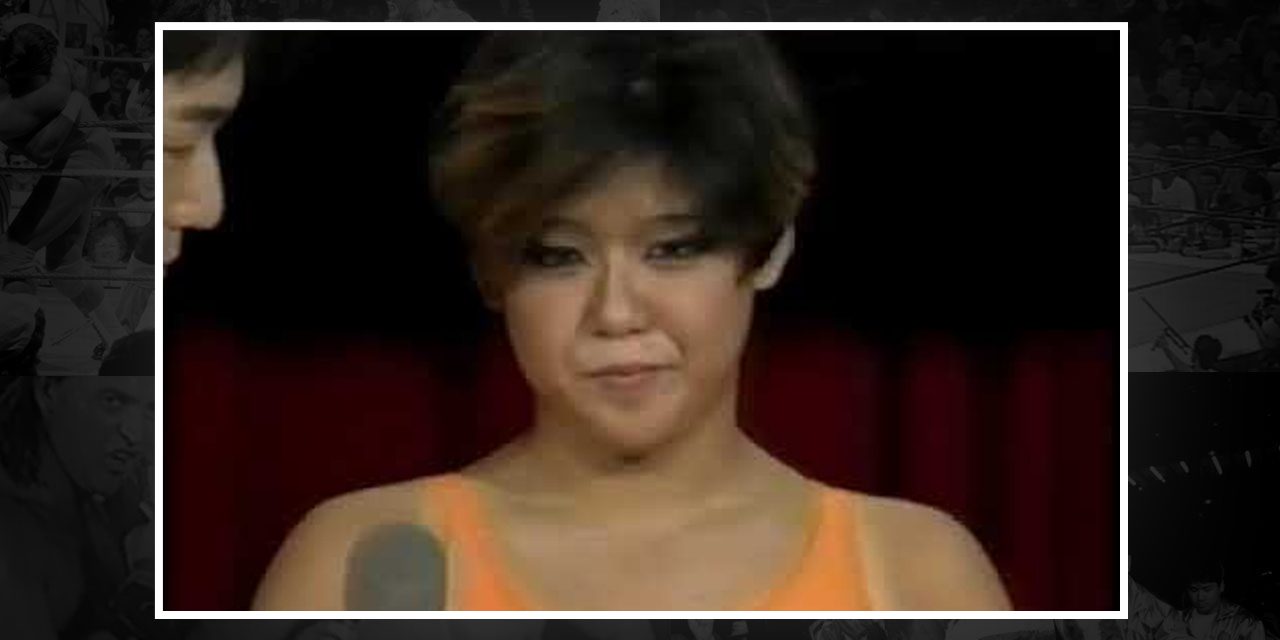 The collection of matches and segments I am watching for this series come from a 1992 Yearbook created by Goodhelmet, a longtime poster at the Death Valley Driver Forum and other wrestling places. A cross-section of the best (and worst of wrestling within a certain year), it is a great snapshot of everything of importance. The footage is taken from August 15.

On August 15, 1992, All Japan Women’s Wrestling held their Mid Summer Typhoon show, headlined by a title match that also included hair versus hair stipulations, and the final of a tag team tournament. As one of the best promotions in the world with ease, the focus of this week’s action is that show, yet there was also offerings from W*ING, WWF and Memphis on that exact same date.

Fresh from their deathmatch exploits earlier in the year, Mr. Pogo and Mitsuhiro Matsunaga are now on the same team in W*ING as they took on The Headhunters, a team that screams ‘pro wrestling’ – 400-pound men with face paint and the ability to land moonsaults pretty much does that. The bar was set low when it came to the aforementioned Fire Death Match even with Matsunaga’s best efforts, though I came into the match more hopeful of something engaging due to the Headhunter’s involvement. One of the Headhunters was bleeding an absolute gusher early on, while Matsunaga and Pogo weren’t exactly the best of friends as Mitsuhiro slapped away an offer of Pogo’s boot as a potential weapon. Minutes later, a tag from Matsunaga to Pogo got a response from the crowd, emphasizing the strength of their animosity in recent times.

At a time when the walk, brawl and weapon attacks style of wrestling was rare, this probably stood out. However, the brawling isn’t particularly inspired and there was very little structure to what was going on. Maybe I was expecting too much by even throwing the word structure out with regards to this contest, but there could have at least been more of a narrative amongst the aggression. Once they established that Pogo and Matsunaga could work together, one guy punched another guy who punched him back who then got hit with a chair or shoved into a ringpost ad nauseum. Even though Pogo and Matsunaga were playing nice, a reversal of an Irish whip saw Matsunaga eat a chairshot which eventually saw a Headhunter land a moonsault for the victory. Things were largely kept short and a post-match brawl was also brief before some challenges are issued on the mic. The video isn’t online, but you aren’t missing anything by not watching this truth be told.

I have much larger hopes for the two offerings from the AJW card from the same day, starting with Bull Nakano and Aja Kong against Akira Hokuto and Toshiyo Yamada. The All Japan Women have pretty much been guaranteed entertainment so far this year and with Kong/Nakano you have two of the most engaging wrestlers – male or female – of all time let alone 1992. Over the course of this Fuji TV Tournament, Yamada and Hokuto have fallen out, leading to the two women coming to blows in a pre-match promo. Things aren’t much better at ringside as a poor start for the team – Kong and Nakano unsurprisingly dominant – was exacerbated by a further falling out, with Hokuto brandishing her kendo stick as a threat to Yamada.

This falling out actually sparked the team into life as each came back with renewed vigor as kicks and submissions on Nakano targeted the leg in particular. A misguided attempt by Yamada to suplex Nakano turned things back in favor of the physically dominant team, with Kong, in particular, enjoying the opportunity to chuck Yamada around the ring. Hokuto didn’t get off lightly as a brief comeback was cut off, leading to a wicked spot where she was tangled in the ropes via her legs in order for Nakano to land three clotheslines in a row. The animosity between Hokuto and Yamada almost boiled over as Yamada tried to halt Hokuto’s use of the kendo stick, though this only served to cost them further as they were subjected to dives from both of their opponents – yes, including Kong – before Hokuto earned a piledriver through a ringside table.

Yamada and Hokuto, even amongst the internal squabbling, had their opportunities, with Hokuto coming close to stealing the win with a Northern Lights Driver on Nakano. However, a brief attempt to work together after some more scuffling over the kendo stick actually cost Yamada and Hokuto as a misjudged kick from the top rope by the latter caught the former in the face. Sensing an opportunity, first Nakano and then Kong landed top rope legdrops on Hokuto for the win. Unsurprisingly, Yamada and Hokuto brawled after the bell as their tag team was clearly finished. A great match that saw a team disintegrating before our eyes, yet still coming close at times to defeating the awesome duo of Kong and Nakano. Well worth a watch.

In getting to the final of the tag tournament, Toshiyo Yamada ended up pulling double duty as she battled her best friend turned temporary enemy in Manami Toyota. This was hair versus hair and with Toyota’s IWA title on the line. Toyota has a really strong reputation from this time period, yet there are also those fans who question how well her ‘go, go, go’ style ages, especially in matches where it is debatable as to how much ‘storytelling’ is taking place. It is definitely an issue I have with the start of the match as it takes a while to settle into a rhythm, with moves for what felt like the sake of moves. However, when things slowed down as Yamada started to work the leg, things began to click a little bit more for me.

With all the stakes attached to the match, both women began to unleash their high powered offense, with each suplex or aerial maneuver often leading directly into a pin attempt in a manner that I felt sold the desire for victory and the drama. Multiple back suplexes by Yamada and exchange of reversals leading to a Yamada nearfall has the crowd on the edge of their seat, especially as Toyota had largely controlled the match up until that point. After another set of reversals ended with a nearfall for Toyota, she managed to land the Japanese Ocean Bomb for the victory. In the post-match, Toyota, regretting her choice of stipulation, tried her best to halt the haircut, but Yamada, with the help of several other wrestlers holding Manami back, managed to finish the shave. Not as good as the tag match for me, though the second half was very strong.

No in-ring action from America from this day, though that doesn’t mean there wasn’t something of interest for the fans of the WWF or Memphis wrestling. A week after an interview with Ultimate Warrior in which Ric Flair spoke about secret negotiations, Randy Savage joined Mean Gene Okerlund to answer the question as to whether he was going to have Mr. Perfect in his corner for SummerSlam. Savage realized that the mere thought of negotiations had shaken Warrior to his core, yet as he hypothesized about what to do next, Perfect came out to talk up his credentials as the greatest manager in the WWF, before revealing that Warrior was now in negotiations for his services. Just like Warrior, Savage left the interview hinting that he perhaps was involved with Perfect, leaving the fans on tenterhooks as to who might have Perfect and Flair on their side. As a UK wrestling fan, I’m a big fan of SummerSlam 92 as an event, so to see the build-up to this match has been fun, especially as the heels have their way psychologically with the face duo.

With SummerSlam in two weeks, WWF Update focused on the various big storylines outside of the WWF Heavyweight Title Match. For the most part, this was a collection of pretty generic promos – Davey Boy Smith, Bret Hart, The Beverly Brothers, The Natural Disasters all giving their thoughts on their respective matches – but there were a couple of bits of interest. Diana Smith Hart began the cavalcade of promos with a tearful lament about the problems that had been caused by the Smith versus Hart IC Title Match; Harvey Wimpleman warned – on behalf of a wailing Kamala – that the Undertaker better not get in the Ugandan Giant’s way; and Sensational Sherri unveiled the agreed rule for the Shawn Michaels and Rick Martel match in which no punches to the face were allowed.

To finish the action from August 15, a brief promo has an aggrieved Brian Christopher joined by Doug and Eddie Gilbert after losing a match to Reno Riggins. The focus was more on the aftermath of a match between Doug and Tommy Rich, one in which the former NWA World Heavyweight Champion won with a Thesz Press, yet was beaten to a bloody pulp by the Gilberts. Proclaiming themselves the ‘New Memphis Mafia’, Eddie Gilbert stated that they were taking contracts out on all of the Memphis stars, old and new in a fun enough promo.

With the bulk of the action taken up by the All Japan Woman’s card, it was a good thing that it afforded me close to an hour’s worth of good wrestling. Whilst the promos and interviews were all decent enough and the W*ING tag offering was poor, it was people like Bull Nakano, Aja Kong and Toshiyo Yamada who offered up the best action from this date. Join me next week as we continue to trawl through 1992 as That Was The Year That Was.