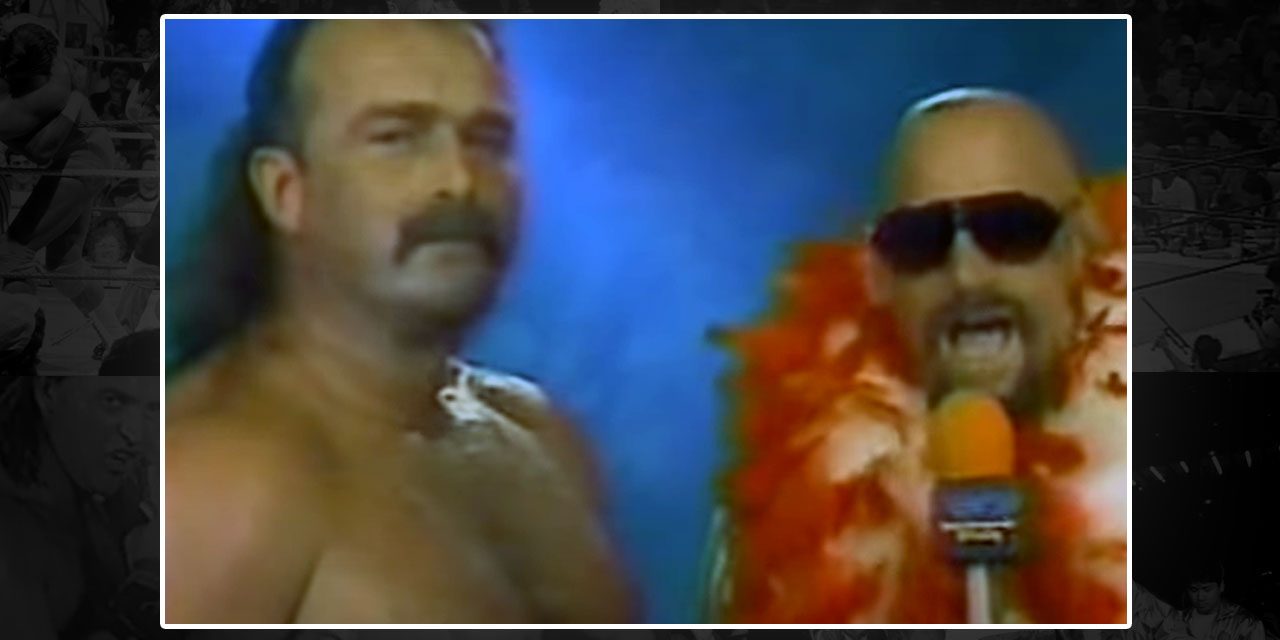 The collection of matches and segments I am watching for this series come from a 1992 Yearbook created by Goodhelmet, a longtime poster at the Death Valley Driver Forum and other wrestling places. A cross-section of the best (and worst of wrestling within a certain year), it is a great snapshot of everything of importance. The footage is taken from the August 8-11.

With August upon us in That Was The Year That Was, we get to join the masses in enjoying the action from a G1 Climax tournament that saw New Japan and WCW wrestlers collide. On top of that, this period of time saw a major title change in one of the big two in the US.

Having dominated Sting en route to winning the WCW World Heavyweight Title, Vader’s subsequent loss to Ron Simmons a month or so later (taped 2nd, aired 8th) is something that I’ve never really got my head around. I understand the allure of having a claim to have a legitimate black athlete as your champion, but I never got a sense that Simmons was ‘the guy’ to lead the promotion. I didn’t watch it at the time and it wasn’t as if Simmons wasn’t popular, so maybe it was something that I’d have appreciated at the time. The narrative was that Sting couldn’t fight Vader, but with the fans promised a title match, Ron Simmons was drawn out of a collection of nine names in order to battle the champion.

To give the booking its credit, the fans were all in on Simmons against Vader as the match was joined in progress, popping for every punch, slam and shoulder block. They also bit on a nearfall from a Simmons spinebuster, though this actually served as the transition to Vader taking over. This was always going to be compared to Vader’s matches with Sting from around the time, and while Simmons gave it his all, the Vader heat segment when battling Sting is a thing of beauty in a way that this match couldn’t always compare against. However, a kickout from a second rope splash and some flash nearfalls helped stoke the fires of hope for the fans. I genuinely do love the finish as it was conceivable that a powerslam by Simmons out of nowhere could keep Vader down for three and the celebrations afterwards were heartwarming…I just don’t think they ever really knew what to do past the title change.

(full match, rather than JIP version from the set)

The set also included an interview with Simmons alongside Tony Schiavone. This was pretty stereotypical ‘best day of my life’ stuff, with the new champion coming across as earnest, if a little lacking in charisma. That was something you couldn’t chuck at Jesse Ventura or Jake Roberts, with The Body talking to one of WCWs newest acquisitions. Roberts hadn’t yet gone to pasture yet, especially when it came to selling a story on the mic. A promo about Sting bemoans how the easy life that he portrayed wasn’t the reality for Roberts, nor for the kids in the ghettos or anywhere else where a struggle was the daily reality. Chilling, though things were only going to go downhill from here for Roberts in WCW.

I do wonder what a wrestler like Shinya Hashimoto must have felt when standing opposite Rick Rude and Madusa in a New Japan ring as part of the G1 Climax. That isn’t to suggest Rude was below him in any fashion, but it was very much a case of worlds colliding as the two men met in Tokyo after victories over Super Strong Machine (Rude) and The Barbarian (Hashimoto…even more of odd bedfellows pairing). Rude was all about the bumping and Hashimoto was best when leathering his opponent, so the potential was here for a good match. What I particularly liked was how the crowd were into Rude as a heel; a hip swivel that saw Rude flinch in pain due to the accumulation of injuries had the crowd laughing at his misfortune.

A Rude match often includes at least a chunk where he is on offense and things can grind to a halt as he isn’t the most dynamic. This threatened to happen as a seated chinlock slowed things down, yet it didn’t last for too long and Hashimoto was soon planting Rude with a belly to belly suplex and escaping a sleeper with a chinbreaker. There was one ridiculous spot as Rude came off of the top rope with no move planned outside of going face-first into Hashimoto’s feet, but it didn’t detract too much from things overall. A Hashimoto DDT very clearly had Rude too close to the ropes, before Rude absolutely drilled Hashimoto with a top-rope DDT and top rope kneedrop for the emphatic win.

The crowd does love Rick Rude’s shtick, which is further highlighted by the kicks they get out of his hip-swivel teases before a match against Kensuke Sasaki. Within the opening two minutes, they were even tittering about a typically Rude sell of an atomic drop. The bulk of the match saw the two men exchanging weardown holds with Sasaki working over Rude’s back for a prolonged period before Rude grounded his opponent with a chinlock. Things did pick up from time to time, as the submissions built to some bigger spots such as a back suplex by Sasaki to escape from the aforementioned chinlock.

The slow build-up gave way to some more crowd-pleasing moments towards the finish as Sasaki briefly applied a sleeper (broken by a chinbreaker) before helping Rude to sing soprano with an inverted atomic drop. In particular, I enjoyed that it took Rude two top rope kneedrops to finish Sasaki off – they could have been lazy and had Madusa help him once more, yet Rude was booked strongly going into the final. This won’t be a great match for all, but I liked it enough.

The other semi-final saw two of the Three Musketeers in battle as Masahiro Chono faced off against Keiji Muto. They had met the previous year in the final, but for one, the road stopped here. The mileage for some will vary for the opening ten minutes as the two men grappled on the canvas in a way that could be perceived as wearing the opponent down or killing time if you were being less charitable. It was Muto who threw the first real bombs, dropping Chono with a piledriver and landing multiple crossbodies from the top after Chono avoided a handspring back elbow and a moonsault respectively. Playing off their knowledge of each other, both men also avoided successive moves to the outside, though Chono came off the worst for a missed apron dive.

Some drama was squeezed out of the trading of standing stretches with Muto again seemingly coming out on top of the exchanges. Chono managed to avoid another moonsault and apply the STF, only for Muto to get the bottom ropes and break the hold. The two men returned to trading Yakuza kicks and dropkicks, though this went on longer than was strictly needed and was diminished returns at best (they repeated it seven times after the STF attempt). With both men flagging from the exertion, Chono avoided a dropkick and applied the winning STF. This should have been so much better truth be told, and the repeated spots were an odd choice to finish this match.

With big matches in America and Japan, we end with a clash of lucha legends in CMLL as Atlantis took on Emilio Charles Jr. for the masked luchador’s NWA World Middleweight Title (it is worth noting some disparity between the dates for this – I have the 11th, but some sites have it as later, especially as it aired I believe on the 16th). The crowd are up for this from the opening bell as the primera caida saw both men focus on joint holds with bad intentions. There was a rawness about the holds that I enjoyed as each man struggled for superiority. Charles Jr.’s main port of call was the champion’s arm as he ground him down with multiple locks and holds. However, it was a huracanrana that ended up keeping Atlantis down for the three.

The segunda caida was a bone of contention in some of the online discourse I saw and I can understand why. Rather than build the tension that the champion might be in danger of being defeated, the caida lasted less than a minute as Atlantis blasted through Charles Jr., forcing him to submit with an abdominal stretch. The challenger literally managed no offense, having just pinned the champion mere moments earlier.

Still, everything was set for the decisive tercera with things tied at one apiece. The offense in the primera paid off further at this point as Charles Jr. worked the arm for an extended period of time, tying Atlantis up in a Fujiwara-style armbar. Indeed, the spot went on for around four minutes, but the struggle continued to make it something that was watchable. Even when breaking the hold by getting the ropes, Atlantis was in trouble, especially after getting nailed with a suicide dive and subsequently missing a top rope move of his own. A return to the armbar might have been overkill, but it afforded the fans the struggle that the segunda lacked. Having failed with that plan, Charles Jr. also came up short with a couple of flash pinfall attempts, making the pinning combination that Atlantis used to win the match all the more sweet. A good, heated contest with only a brief segunda caida to hold against it really.

The matches on the docket for this week suggested a certain level of quality, and although not every match hit the headiest of heights, there was a lot to enjoy. Next week, the finals of the G1 Climax top a pretty significant card across the board as we continue to chart what happened in 1992 as That Was The Year That Was.