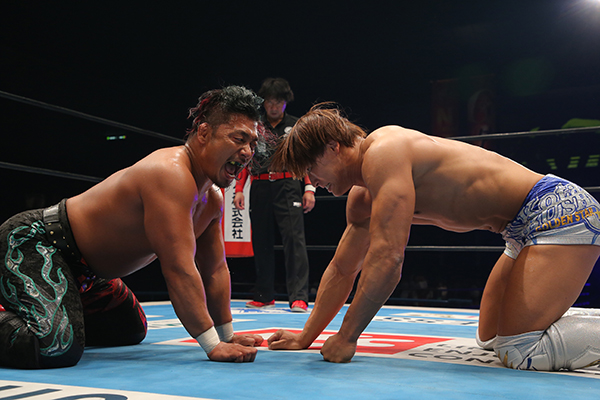 I’ll come clean with you, I’ve hardly watched the young lion matches during this G1. I mean, they’re ON while I make coffee, or try to fix this chair in the living room that we really should just throw out at this point, but they’ve been more like AM radio with armdrags for me. I imagine you’re in a similar boat, reader, and I can tell you that this match won’t do much to change that. I was already in on Tsuji and especially Uemura going into this tour, but Gabriel Kidd’s seemed to take a step up in terms of aggression. This one isn’t as mean and hard hitting as their match from Night 5 but it’s quick and Tsuji’s finishing sequence (running powerslam, and a wrenching Boston Crab) looks adequately brutal. Anyway, coffee’s ready. **½ 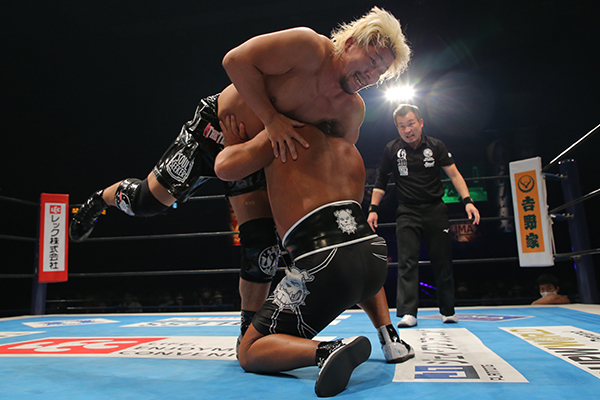 As soon as Ishii steps in the ring, Big Yuj welcomes him with a boot in the face and a lariat and the action spills to the floor. There’s a reverse DDT on the floor that sets the table for Takahashi to control the offense back in the ring for next few minutes. I’ve seen opinions vary wildly on Yujiro’s performances in this tournament, ranging from “absolute dirt worst” to “actually good” and I think both of these views are out of control. The man merely exists. He’s a mostly blank canvas on which you can paint whatever sort of match you’d like on your A-Block equivalent of the Toru Yano Night Off, so long as you let him bite your finger a little. Sometimes it’s good (Taichi), sometimes it’s not (Okada) and most of the time it just kind of exists.

On the other hand, what does an Ishii night off even look like? Things pick up when Yujiro lands a nasty looking Fisherman Buster, and Ishii pops back up to German Suplex him into the corner post. The last third sees the two drop some bombs on each other, real big boy looking stuff. You might get tired of Yujiro near-falls around the point he reverses a brainbuster into an awful looking cradle – don’t worry, Ishii does too, and absolutely flattens him with a lunging headbutt. Ishii scores the pinfall shortly thereafter. There are some stumbles, but these two hit each other pretty hard, and that’s good enough for me. ***¼ 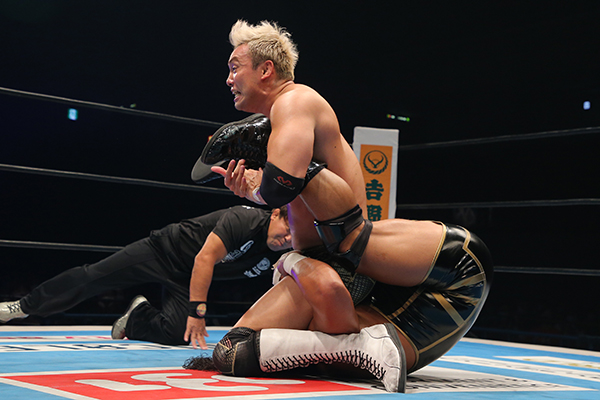 Cobb rules in this tournament, right? He’s not going to blow up your spreadsheet, but after a disappointing performance in his G1 debut last year, I’ve been actively looking forward to his matches this time around. He’s got a better grasp on how to fit in, a seemingly better gas tank, and that smoking hot gray in his beard. Okada’s height hurts the imposing aura Cobb holds over most opponents in the block, but his impressive power is re-established well in a sequence where he lifts Okada off the ground, alternates him from side to side, heaves him up for a Doctor Bomb, and then drops him back down into a back suplex. He caps that off with the standing moonsault. Hell yeah.

Okada seems to have ditched the heavy layering of tape on his lower back, and in turn is able to withstand more abuse to it. He doesn’t even wince in hoisting Cobb up for a Tombstone. It’s a cool touch to this web of plot Okada’s been weaving through his tournament. Like many Okada opponents, Cobb taunts with a Rainmaker of his own. In an awesome spot he follows the ripcord with an attempt at the Tour Of The Islands that Okada narrowly escapes. There’s only one brief attempt at the Money Clip (which Cobb does sell like impending death) before Okada snags a victory with a clever sitting cradle. I liked this a lot. A fun match that advances the Okada G1 Saga without any of the stuff that might make you groan. Cobb makes great fodder while Okada continues his fight against the real opponent, his self esteem or whatever I guess. ***½

We have ourselves an arm match, folks. Suzuki spends the entire bout abusing Ospreay’s right arm, and the results are mixed. It completely removes any ability for Will to stand in the pocket trading shots with Suzuki. In the match’s best sequences Suzuki sneers while demolishing him with gruesome elbow after gruesome elbow. Beyond that though, I didn’t really think the focus on the arm was the best path for this one. Will largely continues using the arm and yelping with each attack, then returning it to a crumpled position at his side. Down the stretch he mostly bails on selling the arm, before an abrupt Stormbreaker wraps things up. It’s certainly not a bad match – Will is always fantastic in scrambles and Suzuki is the quintessential bully – but placing such a deliberate focus on the right arm without really cashing it in felt like an unfortunate misstep for what was a very promising matchup. Oh yeah, and here’s a GIF of Suzuki pulling off a La Mistica. ***¼ 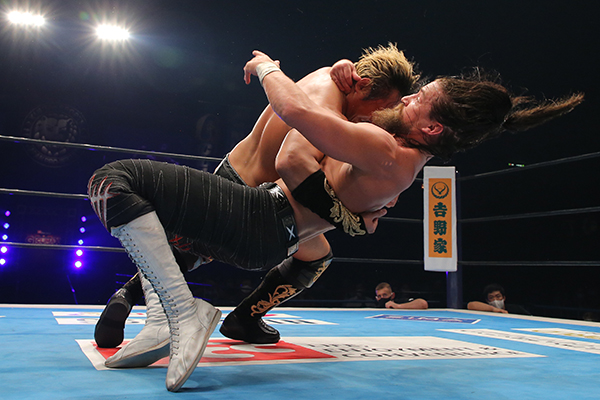 I’ve been looking forward to this match. Jay’s stepped it up a ton since returning to Japan, and has reclaimed his throne as the best heel in wrestling. Taichi’s been turning in killer performances in this tournament and I particularly love when someone forces him into the role of relative babyface. The dynamic is established immediately when Jay takes a seat to applaud Taichi’s lip-synced entrance performance like a total shithead. Jay takes control and waves Taichi’s mic stand through the ropes, telling Taichi to sing for him now. Taichi fires back up to his feet after a Deadlift German, to a notable and positive audience response.

Before ensnaring Jay in the Gedo Clutch, Taichi gestures to the cradle’s namesake at ringside, who promptly enters the ring. Red Shoes is, naturally, completely incapacitated when anyone makes physical contact with him, which allows all three of the remaining men in the ring to try and strike one each other in the balls. Taichi succeeds and locks Jay in the (ahem) Taichi-Style Gedo Clutch for a fantastic nearfall. We wrap with a brief but heated closing stretch that ends with Jay scoring a Blade Runner for the win. The antics and character work in this match were a lot of fun, but whenever the action did heat it up it seemed uncharacteristically stilted for these two. Kind of a let down. ***½ 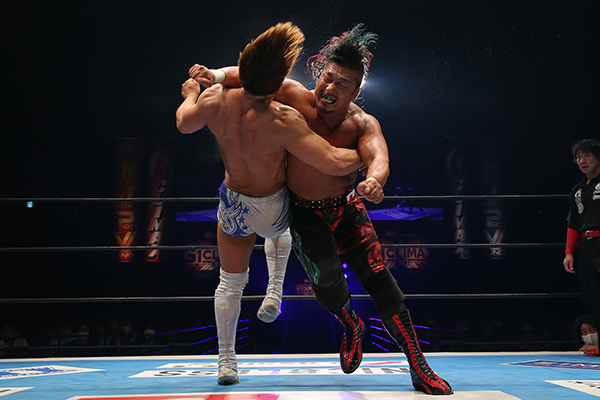 Matches like this one, folks, are why you fuck your life up for a month to watch the G1 Climax. You can tell early that this match will stretch beyond twenty minutes, and there’s a risk it might fall into the same trappings of the needlessly long Shingo-Ishii match from Night 7. Thankfully, this one keeps escalating enough to keep you hooked, with plenty of “oh, goodness” moments along the way. At the ten minute mark they start taking bumps on their necks. At the fifteen minute call they’re simply abusing one another. Ibushi laces kicks into Shingo’s chest who responds in kind with stiff elbows and chops. Ibushi flips out of a German Suplex attempt onto his feet, and wallops Shingo with an absolutely filthy buzzsaw kick across the back of his head. From this point forward, it’s unbridled mayhem with all the Pop-Up Death Valley Drivers and Golden Bombs you could hope for, and by the twenty minute mark it’s like a bomb’s gone off in the ring.

Kudos upon to Kota Ibushi who puts on a masterclass in bumping all over the ring for Shingo’s arsenal of lariats. Every time he and Shingo square up the crowd is stomping like mad, and just when you think they can’t possibly have anything left in the tank they wrap it up. Kota lines up a Kamigoye that’s caught by Shingo and twisted seamlessly into a Last of the Dragon for the pinfall. This thing’s a total thrill ride at about twenty two minutes. You should probably watch it. ****¼ 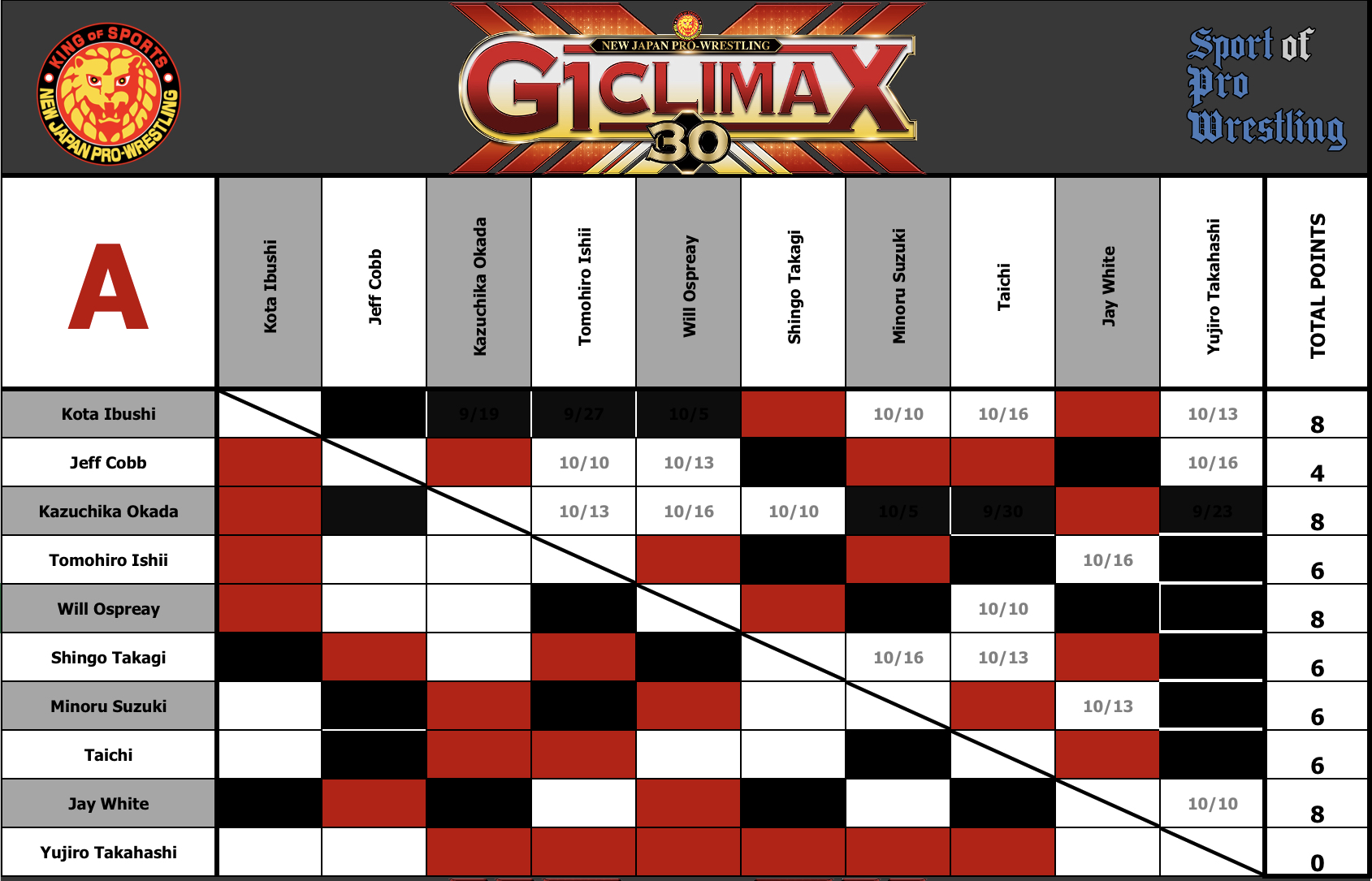 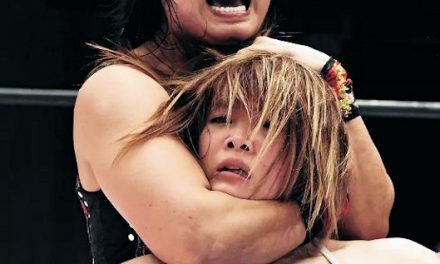