The B Block of G1 Climax 30 returns to action on October 6th in the first of two G1 events from Hiroshima Sun Plaza Hall. This card will be the second of four in a row for this year’s G1 roster as a part of the toughest stretch in the tournament. The B Block is truly wide open. As we enter this set of matches, seven of the ten competitors are within two points of the top of the block.

This will be the first B Block card of this year’s tournament that doesn’t include Tetsuya Naito in the main event, as he drops into the semi-main event against YOSHI-HASHI, deferring the top billing of the evening to Hiroshi Tanahashi and KENTA as they each look to improve upon their 2-2 records thus far in the tournament. Further down the card, we’ll see one of the current front runners, Juice Robinson attempt to gain his first career victory over recent IWGP Heavyweight Champion, EVIL. Third from the bottom, Zack Sabre Jr. and SANADA will face off in a Wrestle Kingdom 14 rematch, and don’t blink during the first block match of the night; Toru Yano and Hirooki Goto will step between the ropes to continue their series of matches that end nearly immediately after the starting bell.

You can find my complete statistical breakdown for every competitor in this year’s G1 Climax here, I have interactive, sortable tables for NJPW’s 2020, detailed results and statistics of all 1505 G1 Climax matches to date, and This Year’s Tournament at SportOfProWrestling.com, and you can let me know what you find when you drill down by dropping me a line on Twitter @TheChrisSamsa. 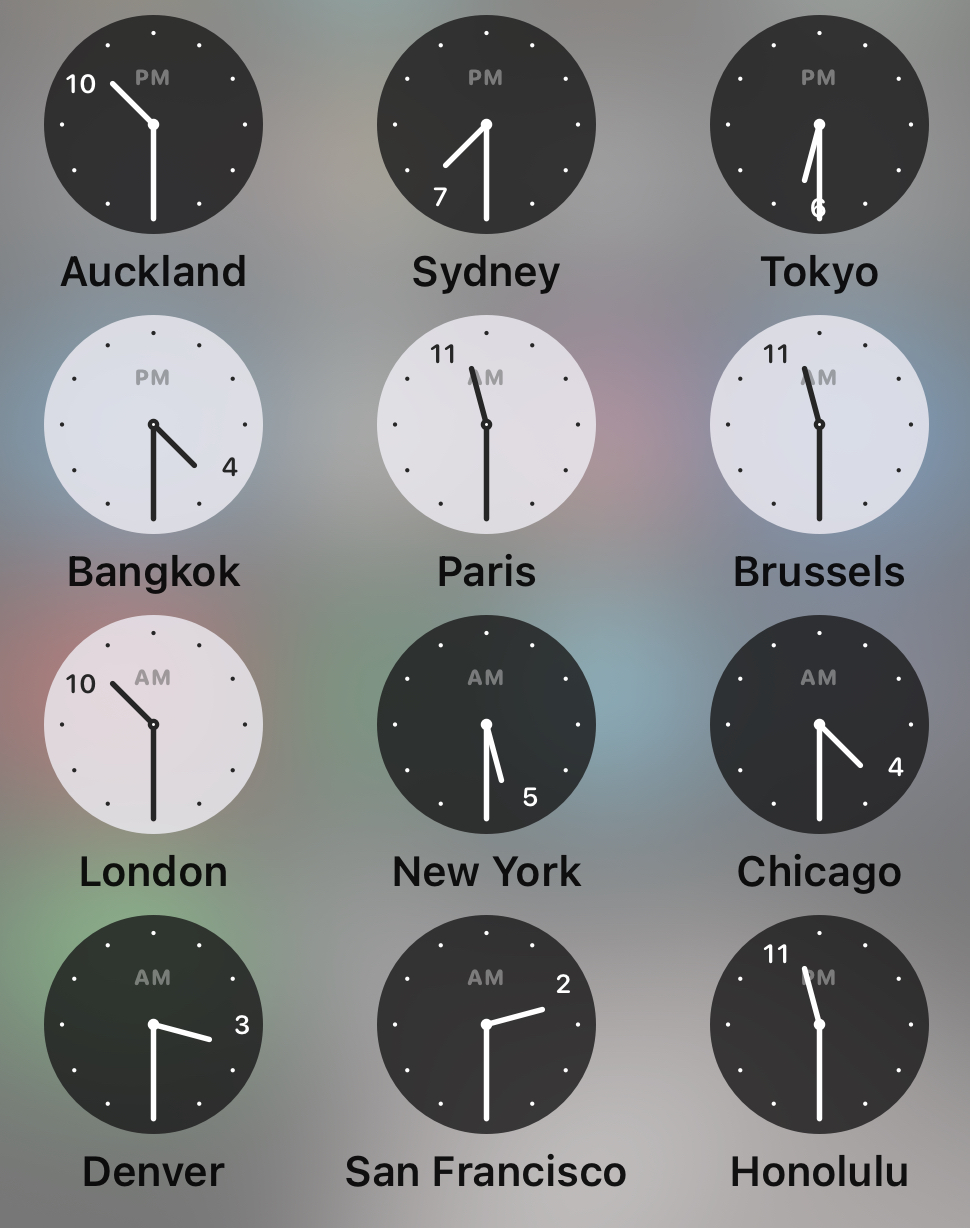 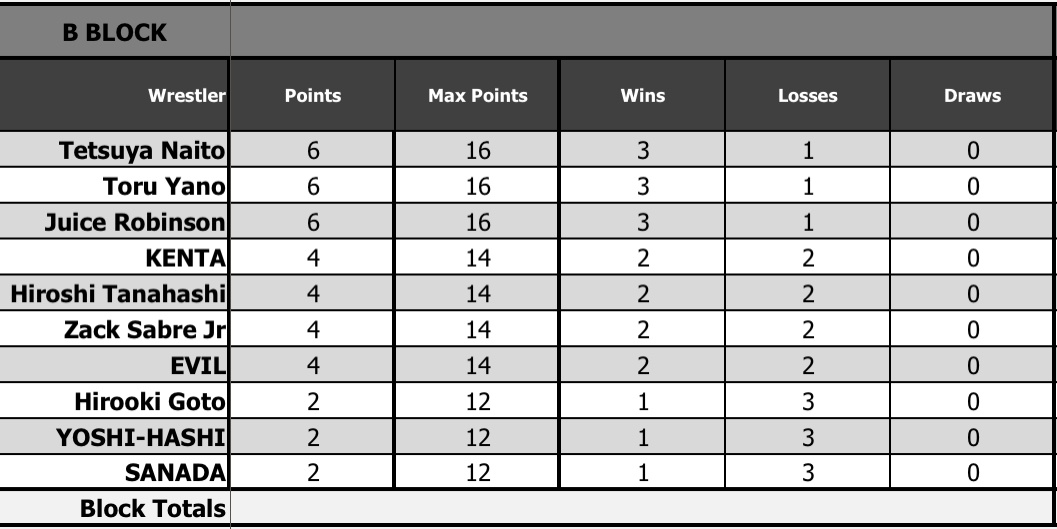 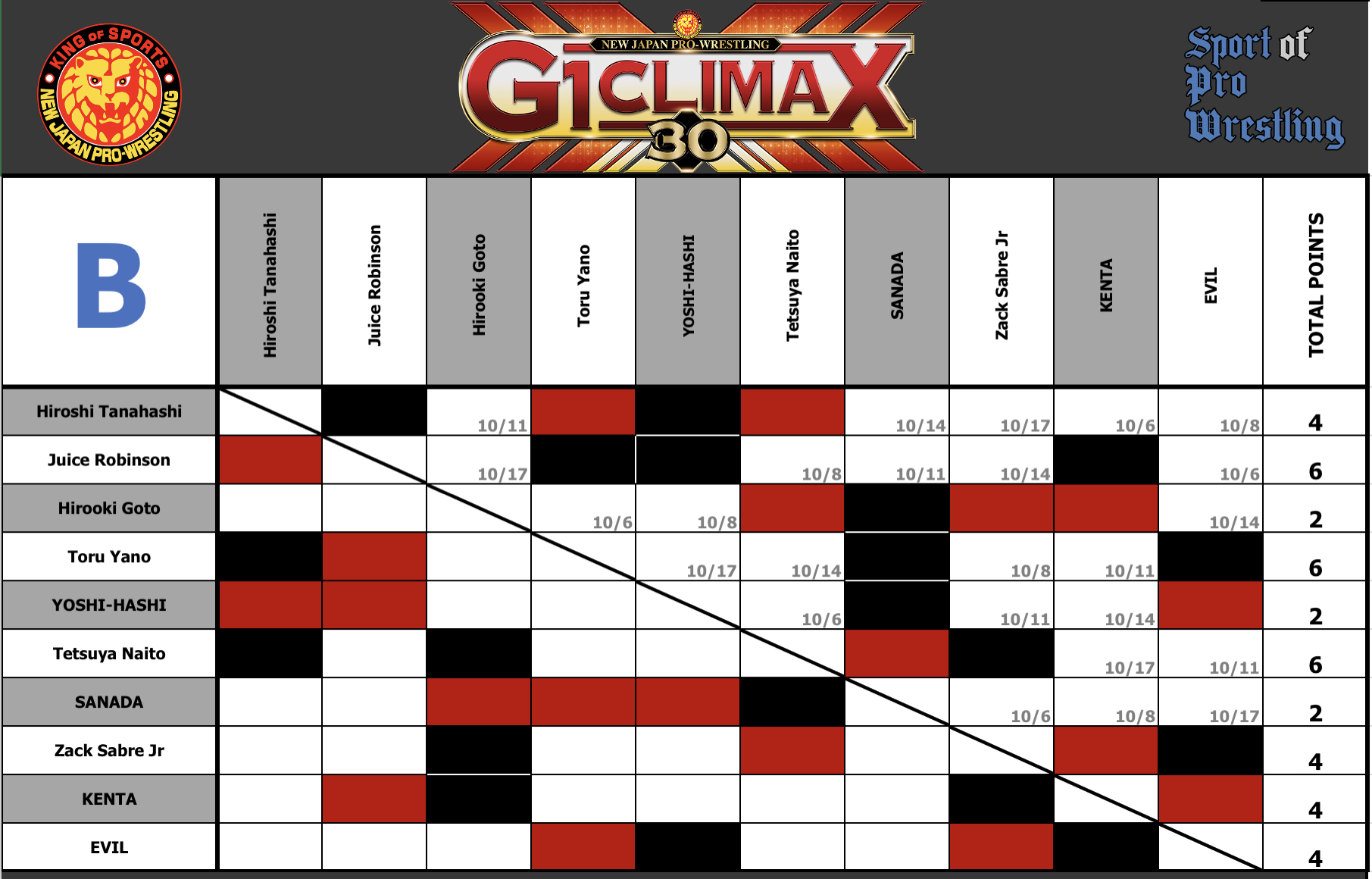 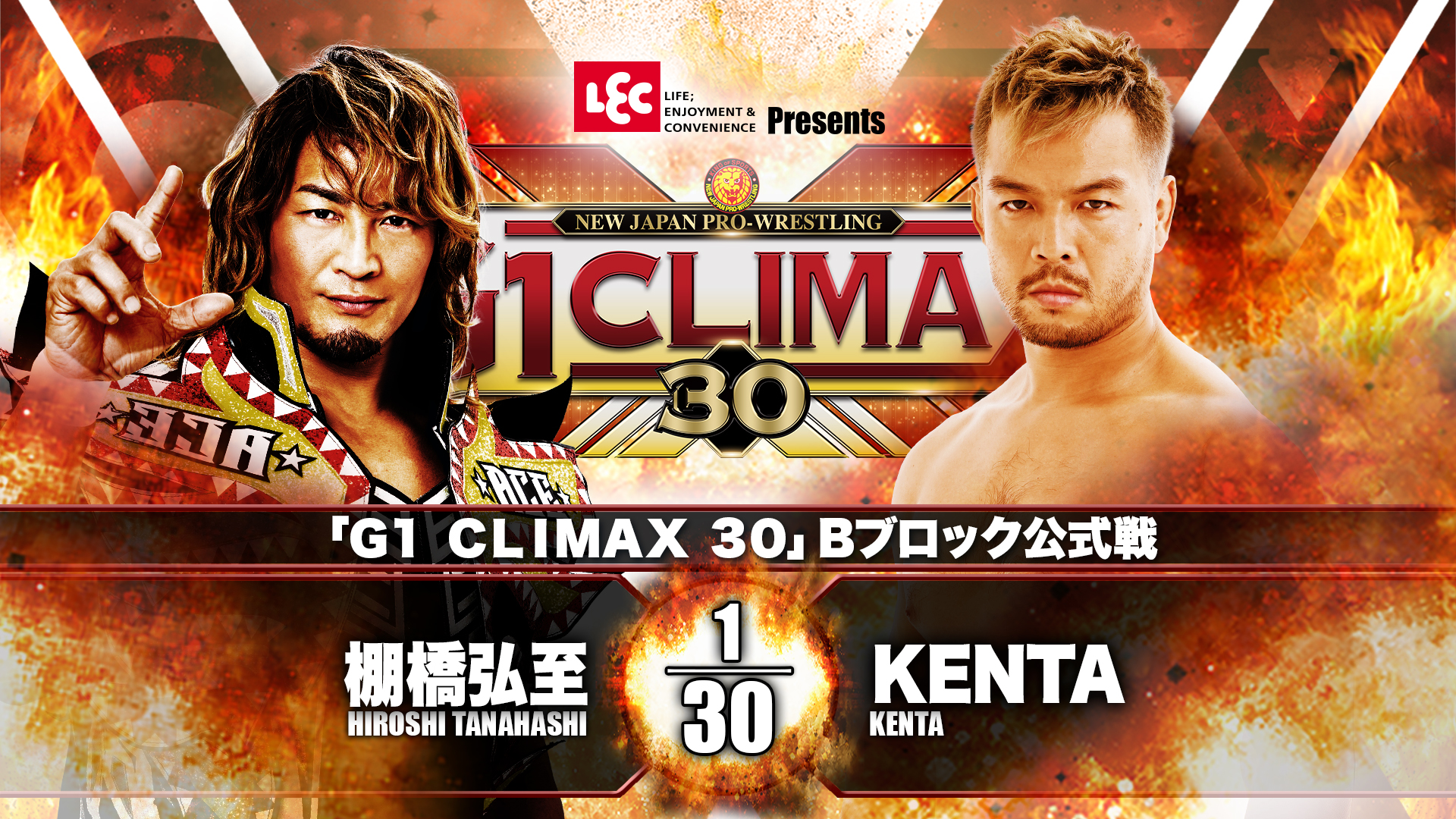 The main event will feature two legends of this millennium facing off for just the second time in their storied careers as Hiroshi Tanahashi takes on KENTA. In their first meeting, during last year’s G1 Climax tournament, Hiroshi Tanahashi and KENTA met in KENTA’s first match back in Japan after spending nearly five years in the United States, competing mostly in the NXT brand of WWE. KENTA defeated The Ace in just over 18 minutes in the middle of his four match winning streak to begin last year’s G1. That was when we believed KENTA’s allegiance stood with Katsuyori Shibata and NJPW’s LA Dojo. That alignment led NJPW fans to believe that KENTA would fight in New Japan in good faith, and KENTA vs. Hiroshi Tanahashi was a long standing dream match that would establish supremacy with honor.

As we know, KENTA’s time fighting in NJPW honorably was a short one. At the end of a five match losing streak to finish last year’s tournament, KENTA aligned with Bullet Club and that is the KENTA who we know now. Hiroshi Tanahashi, on the other hand, hasn’t changed since last year’s tournament. He is still the same fan favorite “Ace” that NJPW fans have known for decades. Tanahashi looks to stay within reach of the top of the block standings and he now has the honor of New Japan Pro Wrestling to fight for against KENTA, who continues to utilize nefarious means and Bullet Club shenanigans to gain victory over the NJPW roster.

Dating all the way back to January 5th of this year, Tetsuya Naito’s last eight singles matches have been booked in the main event. Such is life as the IWGP Heavyweight and Intercontinental Champion, but often times, the G1 Climax tournament provides a respite from those ever-challenging main events. It took a match with YOSHI-HASHI to move Tetsuya Naito one slot down the card, but that may not provide Tetsuya Naito an opportunity to relax just yet. While it may not have produced more than one result in the win column, YOSHI-HASHI has been his best self in this year’s tournament, proving to the rest of the field that he can compete in the most grueling professional wrestling tournament on the planet. 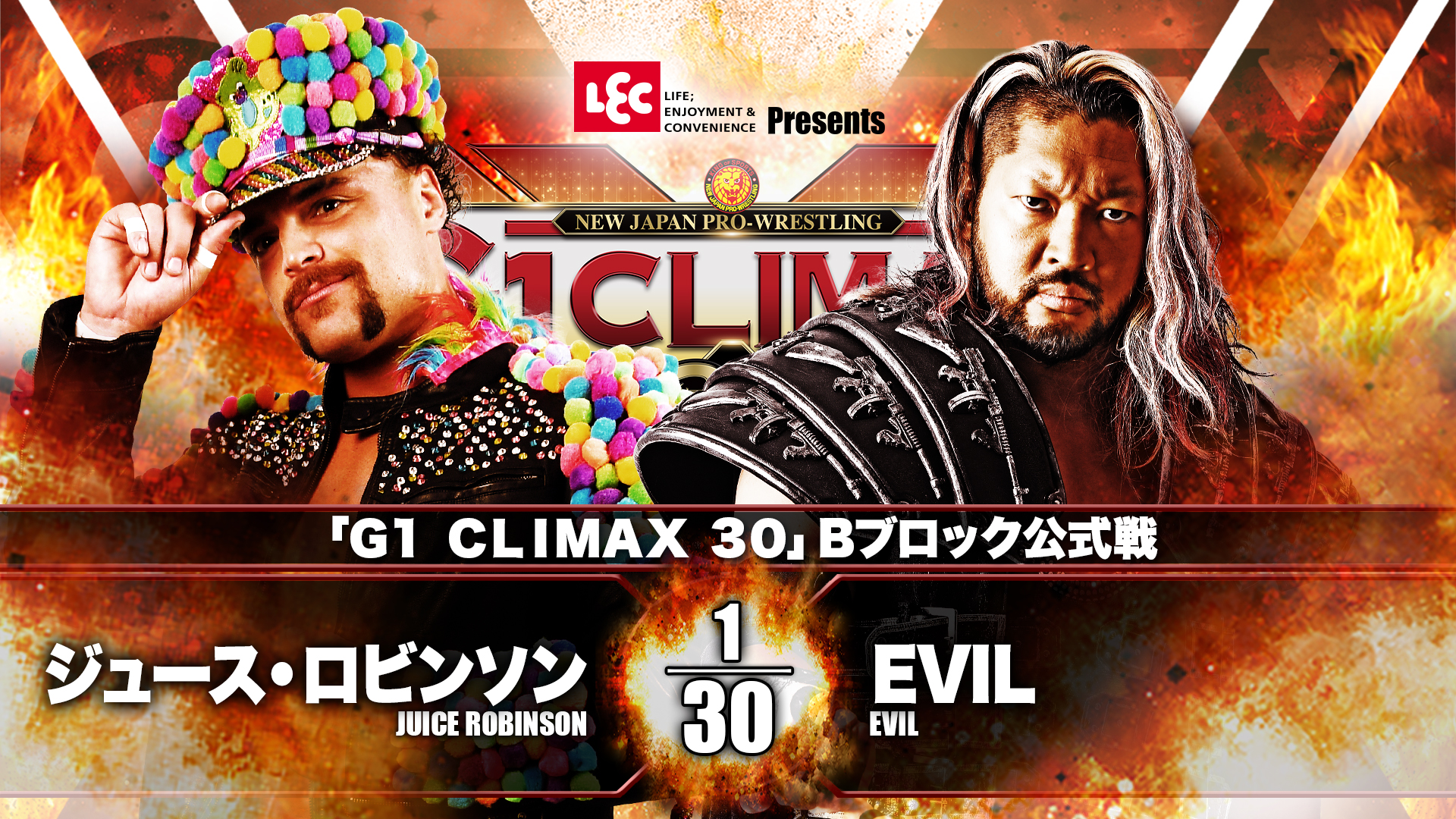 In the middle of the G1 Climax block matches, we’ll see former IWGP Heavyweight and Intercontinental Champion EVIL take on former United States Champion, Juice Robinson. Robinson enters this match with EVIL at 3-1 and with just one more win over his last five matches, Juice will match his previous G1 high of 8 points.

EVIL looks to improve on his 2-2 record in this year’s tournament in his third match ever against Juice Robinson. EVIL’s track record against Juice Robinson is good, he has defeated The Flamboyant One in both of their previous meetings. But, EVIL and Juice Robinson have both transformed at least once since their last meeting in 2017. Juice has come out of the gates hot in this year’s tournament, winning three of his first four matches, and only losing to the legendary Hiroshi Tanahashi. EVIL has bounced between the win and loss column thus far in the tournament, most recently defeating KENTA in a battle for Bullet Club supremacy. 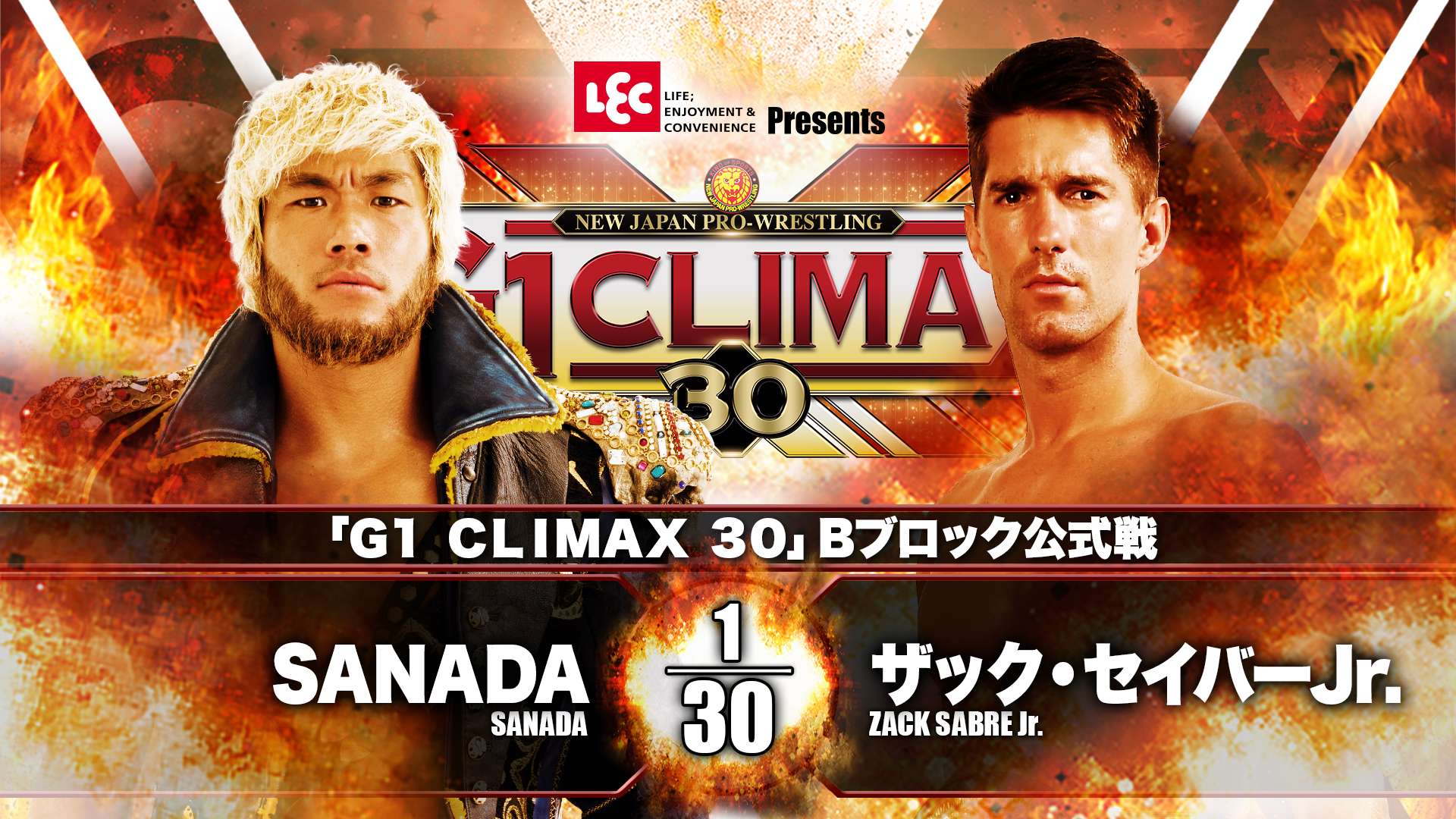 SANADA and Zack Sabre Jr. will meet in a Wrestle Kingdom 14 rematch in the second B Block match of the night. These two first met in March of 2018 in the semi-final of a New Japan Cup that Zack Sabre Jr. would go on to win. Since then, they have wrestled four more times, trading victories between G1 Climax matches (SANADA wins), and RevPro British Heavyweight Championships (Zack Sabre Jr. wins).

History and trends would suggest that SANADA is in line for a victory here, as the RevPro Undisputed British Heavyweight Championship was on the line during their most recent match up, and The Cold Skull is 2-0 against ZSJ during the G1 (2018, 2019). SANADA will look for a three-peat as he attempts to leverage the momentum he created by defeating the Los Ingobernables de Japon leader, and IWGP Heavyweight and Intercontinental Champion, Tetsuya Naito just the other night in his hometown of Niigata. SANADA left it all in the ring three nights ago, defeating Naito in a noticeably exhausting match.

Zack Sabre Jr. enters his match with SANADA on the other end of the rest spectrum. He defeated Hirooki Goto in less than four minutes in his most recent block match and he is two matches removed from his own lengthy war with Tetsuya Naito. Zack will look to get into the G1 win column against SANADA as he attempts to stay in the heart of a wide open B-Block. 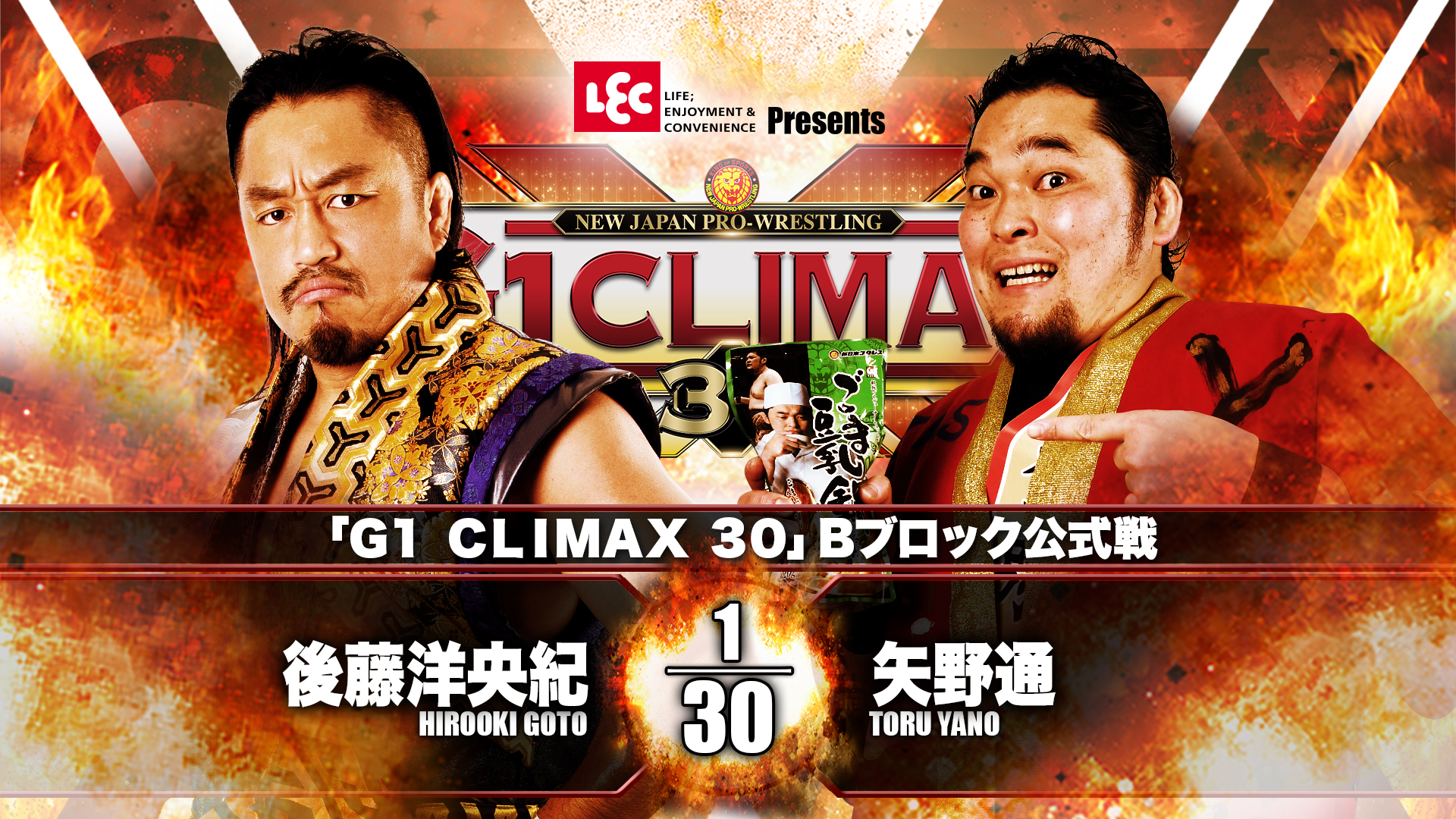 Two of the three wrestlers who entered this year’s tournament with over 100 G1 Climax matches under their belt will open the B Block contests on the card from Hiroshima. Toru Yano looks to continue his Cinderella story and stay atop the block standings while Hirooki Goto looks to tap into what has historically driven him to success in past G1 Climax tournaments. 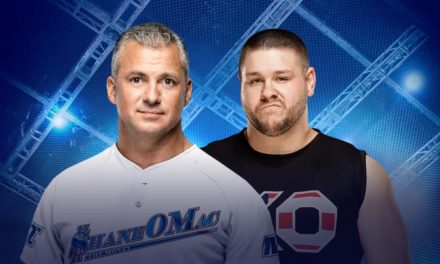 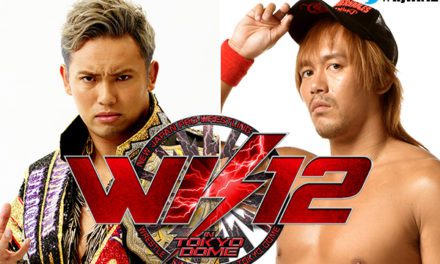