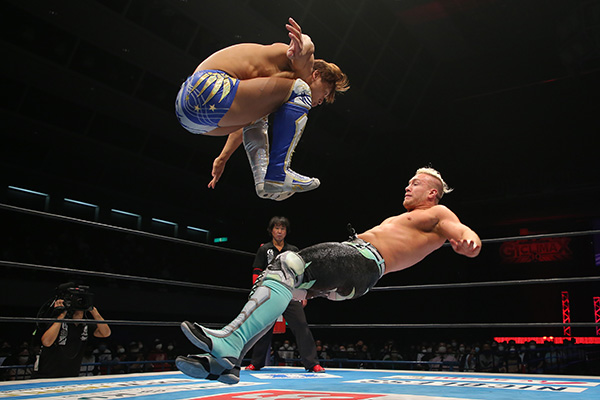 Jeri here, and once again we have another day of A-Block action with three top matches that have the potential to be pretty darn great if the cards are played correctly. Cards aren’t always dealt the way you want them though. Let us spare from doing a needlessly long intro today and get right into the reviews!

Young Lion action starts us off which is always an appreciated way to go about things. Let me say Uemura’s bridge just looks painful as hell and is also impressive. Both men spent a portion of this match showcasing their ground and mat work and it was solid and done well. In fact solid and done well probably best sums this match up. It’s not until the forearms start flying though that I feel myself getting into a bit, especially when Gabriel hits a brutal sounding chop. From there I feel a bit more attuned in what’s going on and it turns into an adequately solid opener. Young Lion openers have been (for me) consistently staying in the three-star range, and that’s not a criticism. It’s a good wetting of the appetite for what’s to come, and they succeeded at that job here. ***

Here’s Yujiro, trying to prove he belongs in this tournament and also gunning for that first win. Unfortunately for him, Shingo Takagi wants more points, and what Shingo wants Shingo can get. While Yujiro isn’t lighting anyone’s world on fire, I give him credit as he’s clearly been trying. And I do low key enjoying waiting to see when/if he gets that win and who succumbs to him. It’s not Shingo though that’s for sure, and while I won’t call this a high caliber match by any means, it turned into a good solid bout. Was kept between 10-15, and had some nice spots (such as Shingo lariating Yujiro’s legs out from under him) on the apron that I appreciated.

Yujiro as I stated above is trying, and he’s had some solid outings in this tournament so far. Nothing that I’m going to remember or tout later on, but he hasn’t ruined shows for me, and he worked fine in this match. I don’t think at any point I bit or thought he was going to get his first victory here and that’s definitely something that kept me locking into this match, but I do think as we get into the back half of this tournament that might change especially if Yujiro starts acting more desperate and energetic in trying to claw his way to that one or more wins. I’m going to give perhaps a bit higher rating than I expected because I enjoyed it way more than I anticipated. Especially the second half of the match where things picked up a bit and Yuijro performed well. *** 1/4

Jeff Cobb is having a much better G-1 this year than his debut participation. Jay White just seems he’s enjoying being back and getting to perform in the G-1 once more. I absolutely loved Jay White doing everything he can to frustrate Cobb and break his momentum. Holding on to the ropes, backing into the corner, taking a cheap shot, and then running. Would it slow down and interrupt the flow of the match? Yes, but it worked well and added instead of subtracting to the match because it made me want Cobb to get a hold and hurt that wormy bastard. There are those who don’t like White’s style, and I admit sometimes I have difficulty getting into it. But when it clicks it clicks, and it did here.

I love watching Cobb’s power, especially when someone like White knows how to make it look good, and White made Cobb look good here. Not that Cobb was just a broom being guided and led around, he definitely did his part, but White was a good pairing and he worked to allow Cobb to shine in this match. I really enjoyed this match. Cobb feels like he belongs in this G-1 and that he’s working to showcase himself rather than just being there for the ride like last time. It’s just good to have White back, and he’s been a nice addition that I think this G-1 would’ve otherwise been missing. I also appreciate the match interference backing firing and GEDO ABUSE! My preferred notes, this match hit them. *** 1/2

Okada has been, disappointing. I’m as big of a fangirl when it comes to Okada as it comes and he’s been one of my big lowlights this tournament so far. It hurts, it really hurts, and is upsetting to claim. I keep hoping each match this is the match the fires will be lit and he’s going to light up the ring with an **** plus match I’ll be talking about when the tournament is done. This wasn’t it. You know the feeling and frustration you get when stuck behind a slow-moving vehicle practically trying to mentally will it to pick up speed? That’s how I felt with this match. I felt stuck watching a match I desperately wanted to go another speed, another gear, another level and it was just fine and content being and remaining where it was.

I don’t know if it’s the lack of a full crowd, Okada putting in lethargic efforts, I’m not sure what the main contributing factors are. But Okada just isn’t doing it for me in this tournament. I get little investment, a little intrigue, and his matches are just not clicking and feel lacking. I enjoyed Yujiro’s match from earlier in this show than I did this, that’s terrifying. There were solid moments and neither were awful by any means, but a whole lot was lacking, it felt incomplete and unsatisfying. Due to my love of Okada, I want to give it the classy lady three, but in the end, I don’t think it even made an effort to reach those heights. At least it wasn’t a money clip ending the proceedings. It was a get in, do some stuff, get out generic match. ** 3/4

Dangerous T? Big Tom Ishii? Like a glass of scotch combined with a nice steak, this is a pairing that I know I’m going to get fulfillment out of. This match clocks right in and goes to work. Someone should put a crown on this match because it ruled. It especially started getting great once Taichi’s pants came off. I said what I said. Taichi opposite of Ishii is best Taichi and that continues to be true here as Taichi just worked his ass off, but there were no slouches this match. Ishii and Taichi both had that give no quarter, give no inch, take no bullshit attitude in this match that just elevated above anything else that had happened on the show to this point and immediately left my disappointing rendezvous with Suzuki/Okada in the dust.

Ishii is always a highlight of G-1s and this trend continues to ring true this year. The expressions, the desperations, the refusal to back down and ability to absorb damage and keep on going, he’s just so endearing and easy to root for. Taichi keeps upping his game and getter better and better. I think it’s time for me to just admit Taichi is having a great 2020, and a fun G-1. Both men hit hard, their facial expressions and personality shine through, they both look great, and this match just has a lot of elements and notes I love to savor and take in. In case it hasn’t sunk in I absolutely loved watching this match, and Ishii and Taichi once again rock it. **** 1/2

Main event time, with both men with equal points one man would be the leader of the pack after this match. Ospreay is becoming quite the cocky prick in this tournament and it’s showcased here at times with ego, posing, and being a bit of a jerk. Both men just move so well and compliment each other, that I pretty much knew within moments this was going to be very good to great main event. And that it was. This match just flowed nicely and wrapped itself up in a self 15-16 minute package which was a bit surprising but no complaints. You don’t need 20 plus to put on a quality main event, and I’d be all for more of that mindset depending on who is facing who.

This match didn’t reach the fairly high heights they are capable of when paired together, and you could argue maybe a few more minutes could’ve allowed them to achieve that, but I’m not upset with what we got. 15 minutes of Ospreay/Ibushi is still 15 minutes of great wrestling and i see no fault in that. This match breezed by comfortably and the crowd clapped and applauded and was along for the entire ride which added to the atmosphere as a well-entertained crowd always does. Good if not completely perfect ending sequence caps this match off nicely and could I be rating this a bit high? Possible, but I really liked it and thought it was a very good way to cap off the evening. **** 1/4

The top two matches are excellent and make me forget the disappointing void that was Okada/Suzuki. Add a not terrible Yuijro match and a good Cobb/White, I definitely felt like I enjoyed myself this show. The show just breezed on by with nothing going 20 +. Got to be honest, that was nice. 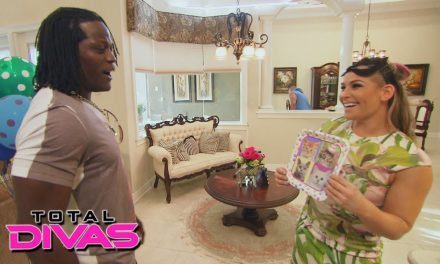 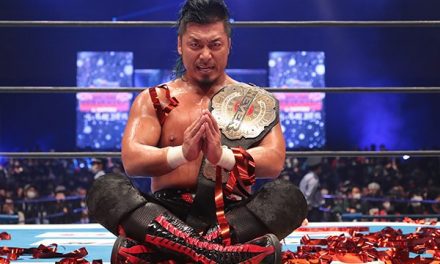 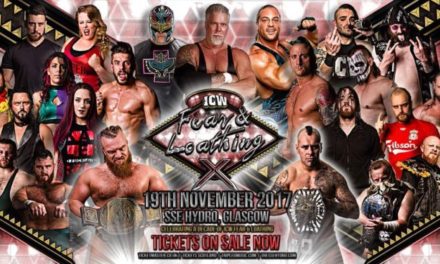