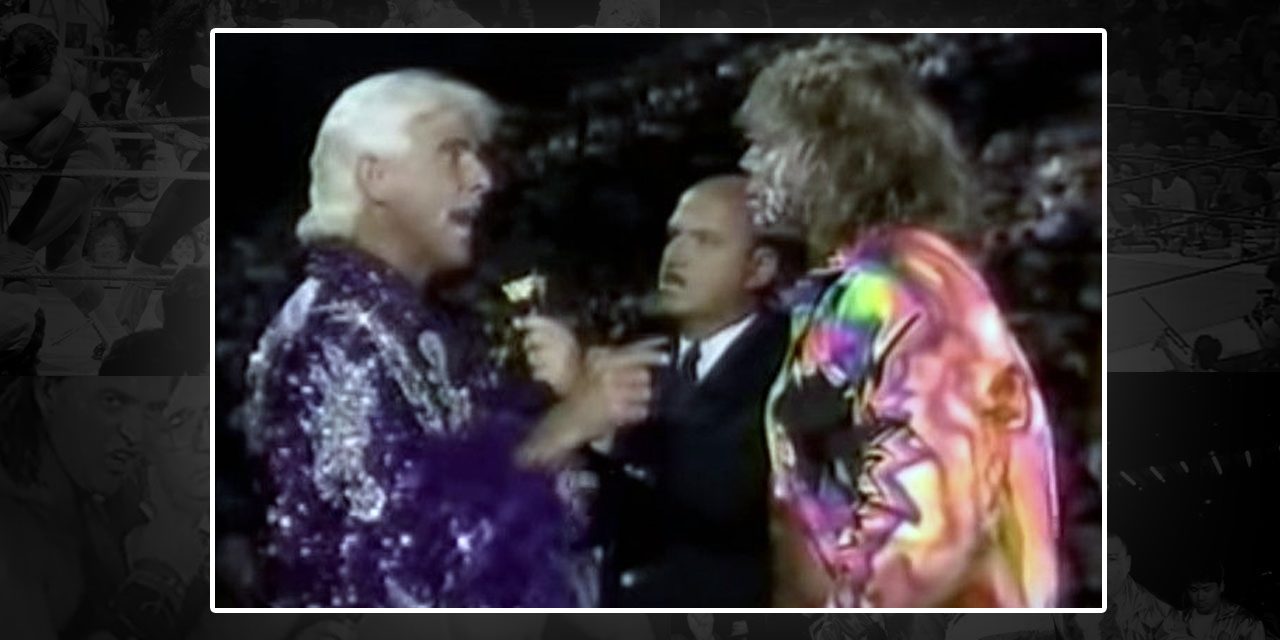 The collection of matches and segments I am watching for this series come from a 1992 Yearbook created by Goodhelmet, a longtime poster at the Death Valley Driver Forum and other wrestling places. A cross-section of the best (and worst of wrestling within a certain year), it is a great snapshot of everything of importance. The footage is taken from August 8.

One promotion gets the bulk of my time this week as Fire On The Mountain is finally upon us. With action from the WWF and Memphis alongside Smoky Mountain Wrestling’s television program from the same weekend, this was all about America, with the bulk of the action of the southern fried variety.

Things started up in the north as The Ultimate Warrior joined Mean Gene Okerlund for an interview on Superstars. Coming off the back of a promo that turned into a fight in recent weeks, things don’t get exciting until Ric Flair came out to join them. Whilst Flair’s initial belief is that he will be the champion by Summerslam anyway, the main focus of the promo is to suggest that Randy Savage has been on the phone looking for Mr. Perfect to be in his corner at the pay-per-view. This was really fun storyline work as Flair intimated that nothing was resolved as of yet, so things could change, and that Savage had made it clear he was willing to do anything to retain the gold. The Warrior, for his part, was also good at sowing the seeds that he was willing to do anything – could that include hiring Perfect?

A short clip from the same show saw Stu and Helen Hart…well, mainly Helen…talk about the title match between Bret Hart and Davey Boy Smith. All this was doing was selling the family element, perhaps being one of the first times that Smith’s relationship with Diana Hart was used in a storyline.

Heading down south to Memphis and the neverending feud between the Moondogs and the team of Jeff Jarrett and Jerry Lawler. After a clip that was aired in order to celebrate 25 years of Dave Brown on Memphis wrestling television – an old interview with Lawler, Sam Bass, and Plowboy Frazier – they aired footage of the most recent fight between the two teams. This time, it was with Moondog Fifi’s hair on the line. Who? Exactly. This was all about trying to extend the storyline with yet another stipulation. Unsurprisingly, Lawler and Jarrett won another walk and brawl after a Moondog collided with a stop sign held by Fifi. To give her some credit, she fought back post haircut, even waffling Lawler with two chair shots that he largely shrugged off. It is worth mentioning how awful Jarrett’s outfit was: like a man who had collapsed into a pile of Post-it notes.

The last action from Memphis was all about revealing upcoming opponents for Eddie Gilbert and Doug Gilbert. They were smugly talking about running the Rock and Roll Express and Tom Prichard out of the territory, only for the reveal of Tommy Rich (as Doug’s opponent) to wipe the smiles off of their faces. For some reason, Rich’s video took place on a pig farm as he mainly spent time explaining how he was a bad guy before, but was coming in as a good guy to take on Doug. Eddie Gilbert’s opponent was in the studio next as Bill Dundee was the reveal. I’ll be honest, I popped for that as Dundee had been conspicuous by his absence from the set over the last few months. His promo was pretty standard face fare, but the crowd were excited by the potential of the Superstar versus Hot Stuff, as am I.

A busy weekend for Smoky Mountain Wrestling began with Bob Armstrong joining Dutch Mantell for Down and Dirty with Dutch. Mantell was a great foil for Armstrong, kissing up to the boss while also voicing his concerns that are dressed up as those of ‘the fans’. Decisions to ban moves, fine heel wrestlers and get involved in Brian Lee’s victory at Volunteer Slam all get discussed, with Armstrong calmly explaining all of his thoughts behind his choices. This is simple, but very effective as setting Armstrong as a commissioner who played by the rules.

Before Fire On The Mountain, a loaded $5000 elimination match took place on the weekly television as further fuel to the fire of that event. The Fantastics, The Stud Stable, the Heavenly Bodies and the team of Danny Davis and Dixie Dynamite met in a match that was pure Southern tag wrestling and so much fun because of it. The opening exchanges established that heels and faces could tag each other, before the Fantastics ended up in the ring together. They soon turned that tide via a criss-cross distraction to then both tag in the Heavenly Bodies – some simple outthinking of the heel duo getting a raucous reception from the fans. Jim Cornette’s racket shot to Bobby Fulton allowed for a heat segment with Fulton controlled by both heel teams and what was effectively a hot tag to Jackie later on. In all the commotion, a loaded boot shot by Tom Prichard ended the Fantastics’ night, only for Bobby to steal Cornette’s racket and nail Prichard for another elimination moments later.

This allowed the match to become more of a beatdown of the underdog face team as Davis was busted open and Dynamite spent all of the match until the second hot tag on the apron. Even when Dynamite was tagged in, it never felt like the Stable were in danger of losing, yet Robert Gibson hit the ring in order to give the heel duo the victory by disqualification. Considering it came shortly after Fuller had hit Davis with a chair at ringside, I felt they could have given the Stud Stable the win before Gibson came down for the brawl. Post-match, the Stud Stable celebrated their win as well as promising to take out more of their frustrations on Gibson’s hide.

On to Fire On The Mountain and it was a battle between The Stud Stable and The Rock and Roll Express that began things with regards to the set. This followed the obvious pattern of the Express outworking the heels to begin with, before Morton ended up isolated and bleeding to build the heat. Fuller was great in this match, in particular when he landed a brilliant bearhug-style spinebuster. The Express landed the double dropkick on Golden after the hot tag, only for Fuller to pull the referee out to prolong the match.

This all led to a weak-looking finish as a Gibson sleeper on Golden was disrupted by a Fuller top rope axehandle, with the heel landing on the face. With the ref distracted, Morton turned the pin around and the Express picked up the win. I’ve seen the ‘reverse the pin’ finish a lot, but it always tends to work better if it is a small package rather than one man laying on top of the other. In some ways, the victor didn’t really matter as the Stable absolutely annihilated the Express, something which they commented on in their post-match interview as they considered themselves as the winners.

The big SMW Heavyweight Title match between Brian Lee and Dirty White Boy was only afforded a few minutes of highlights. Within that time, Lee hit the Cancellation on Boy, his finisher, only for Ron Wright to disrupt the referee long enough to allow a mystery man to hit the ring and wipe out Lee with a clothesline. It looked a little bit like The Mongol from WCCW and conceivably could be as he was still kicking around at this time. Guess I will just have to wait and see. This ended Lee’s reign as Boy covered the champion and won the gold. In the aftermath, some words from Lee suggested that the mystery man might have had a loaded elbow pad. As much as I like DWB, I’m happy enough that this was all clipped.

After an eleven-minute recap of the feud between the teams – one that was cool if a little long – the Fantastics took on the Heavenly Bodies in a Barbed Wire Cage Match. I hate to say it, but I wasn’t unduly fussed by this match as I believe it was more about the spectacle in person than could ever truly be conveyed on screen. The brawling was so-so, but the majority of the match saw the men laying around near the barbed wire and trying to ram each other’s heads into it…as you’d expect. Bob Armstrong was the special referee and was unsurprisingly involved in the finish. Having sent Jim Cornette away as the manager tried to hand powder to his men, Armstrong then grabbed the racket away from Prichard moments later as Cornette returned to aid his team. Instead, this altercation saw Prichard get rolled up for a three count, giving us new Smoky Mountain Tag Team Champions.

Depending on your mileage with what Smoky Mountain Wrestling offered in terms of style, angles and storylines, this looked like a fun show.

Overall though, the four tag elimination match was probably the best action in-ring as it did a lot with very simple establishing of rules and the reactions to them. Check back next week as we continue with 1992 as That Was The Year That Was.