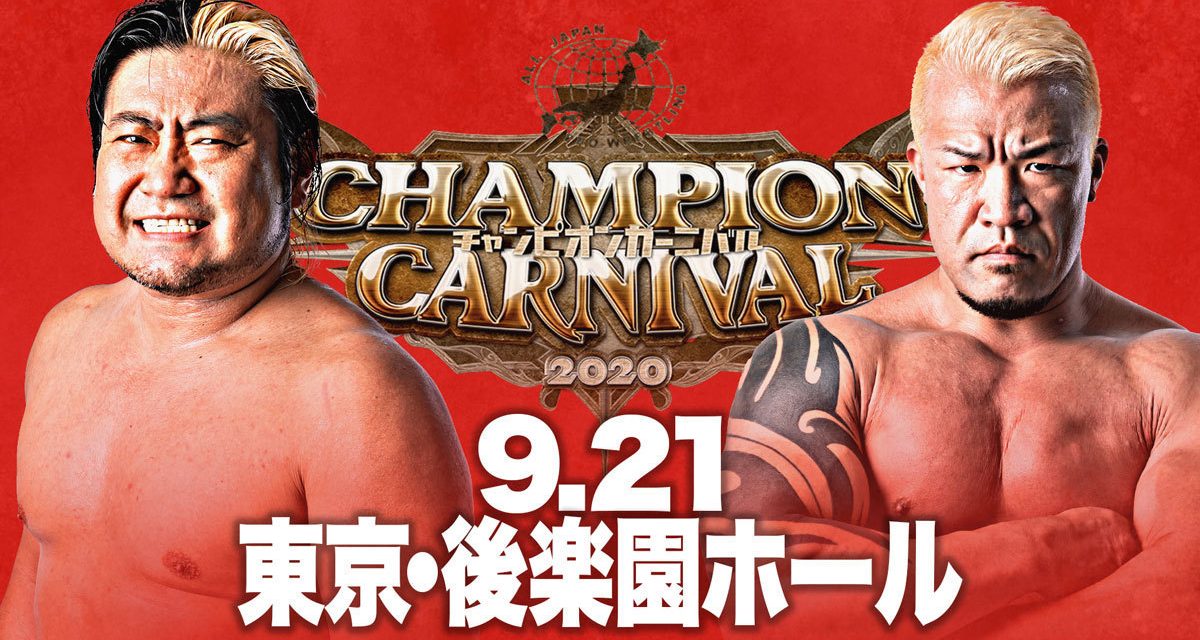 Well since I am reviewing other undercard matches, I might as well do this one. MEN’S Teioh is certainly not who I would have expected to be X for Yoshitatsu Kingdom. Anyway, this was just kind of there. Nothing special about this at all. Yoshitatsu pinned Honda to get the win for his team. **3/4

Just popping in here to say that whoever scored the pinfall in this match, became the #1 contender for the Jr. title and that was Atsuki Aoyagi who pinned Sato with a Firebird Splash. That’s a huge win for the younger Aoyagi. This was a fun little match and given the stipulations, when there was a near fall or submission spot, both sides would jump in to break it up. That made for some comedy. Definitely worth a watch if you have time to watch the non-tournament matches. ***1/2

Well, this is getting a review as it’s a title match. They started with some grappling and reversals. Hidaka then targeted the left leg, hitting a Dragon Screw on the apron in the ropes. This led to an extended period where Hidaka went after the leg. Iwamoto did a pretty good job selling the leg at first, but it got spotty as he got back on offense towards the end. Now if you’re a selling fetishist, I get it. But I generally am no, and this got really good towards the end with the constant back-and-forth. During that back-and-forth, Iwamoto then just hit the Koko no Geijutsu to get the win with little real build-up. Still, this was a pretty good match, better than most of the stuff in the Champion Carnival, really. ***3/4

Early on this went to the outside, and Arashi jumped off the apron on to Lee lying on the ground with a Senton. Despite that cool spot, this was pretty dry. Lee would forearm Arashi, and Arashi responded with eye rakes. Lee wasn’t particularly dynamic on offense either. Lee kicked out of a bunch of Arashi’s power moves. Lee then got Arashi to submit to his armbar move that he’s been using. Another middling Champion Carnival match. Nothing horrible but nothing above average either. **1/2

Ashino targeted Ishikawa’s left leg immediately. This match got down to business right away, which I appreciate. This went to the outside where Ishikawa regained the initiative. Ishikawa then went after Ashino’s back. Ashino hitting suplexes on the much larger Ishikawa was also a cool sight to behold. Ishikawa was also nasty here with a bunch of stiff shots on Ashino. Ashino hit a great looking release German Suplex on Ishikawa and slapped on the Ankle Lock that Ishikawa nearly escaped a couple of times before doing so and hitting a German Suplex on Ashino. That was a cool sequence. Ashino kicked out of a Splash Mountain then rolled over into an Ankle Lock with a grapevine that caused Ishikawa to tap. This was a solid match and Ashino looked great but it never kicked into a high gear that could have made it great. Still, one of the better matches in the Champion Carnival thus far. ***1/2

This got down to business right away. SUWAMA hit Zeus with a Backdrop early on. Then applied the Sleeper Hold. Then SUWAMA went for a Last Ride but SUWAMA started selling the arm that Jake Lee targeted in their match. Zeus even applied a Cross Armbreaker. Zeus also flew in this match with a Missile Dropkick and a Frog Splash. Zeus then locked on the Facelock with the arm also pulled back to the referee stoppage. This was a fun sprint. And with that result, Jake Lee vs. Zeus on the 26th basically is the block finals. SUWAMA finishes with only 2 points which is surprising given he is the Triple Crown champion. ***1/2

This match started like many other Miyahara matches. Some brawling on the outside early, a slow but steady build. This was wrestled in a much more traditional All Japan main event style compared to the other Champion Carnival matches. Things really picked up after Miyahara hit a Piledriver on Aoyagi on the apron. Aoyagi was pretty good here and had lots of reversals for Miyahara’s offense. One spot I enjoyed was that after being caught in the End Game for some time Miyahara made the ropes, then Aoyagi tried to pin him, instead of the usual release the hold and go for a pin that I hate. Miyahara fought back soon after that submission spot and eventually hit the Shutdown German Suplex for the win, though Aoyagi looked good here and got a couple of credible near falls. The best match of the tournament so far. I even thought that this was better than their Triple Crown match from back in February, with Aoyagi looking a lot better here. After the match, there was a nice callback spot where Aoyagi teased hitting a German Suplex on Miyahara. But they eventually reluctantly shook hands. ****

Perhaps the best show of the Champion Carnival so far, though it’s been a low bar. Nothing was blow away by any means, but the main event was a very good match.

As far as scenarios for the finals go, it’s quite simple. On the 26th, Lee vs. Zeus and Miyahara vs. Ishikawa are both block decision matches. If Lee and Zeus draw, double DQ or double countout, they would just have another match. If Miyahara and Ishikawa draw, they would have another match. If they double countout or double DQ, there would be some weird four-way tournament with Aoyagi and the winner of Ashino vs. Yoshitatsu on the same show. But that scenario is incredibly unlikely to happen.