This week on Wrestling Omakase we kick off tournament season with an extensive preview of the G1 Climax, a review of the first two nights of the AJPW Champion Carnival and a short preview of the NOAH N-1 Victory!

The Wrestling Omakase Patreon will be your only place to get our full coverage of all three tournaments. Weekend shows will be covered here on the free feed, but John will bring even more daily coverage of the weekday shows exclusive to the Patreon, including with returning guests too! It will kick off this coming week with Patreon-exclusive coverage of AJPW Champion Carnival Night 3 on Tuesday 9/15 and the opening night of the NOAH N-1 Victory on Friday 9/18, and will continue the following week with exclusive NJPW G1 Climax coverage as well! Don’t miss out on a single minute of our great coverage- sign up for just $5 per month at www.patreon.com/wrestlingomakase! And don’t forget that you’ll get all of our other audio too- our recently compete series talking every Naito-Ishii match in order, our Pateon-exclusive 5 Matches episodes with a whole load of guests (Rich Kraetsch! Alan4L! Todd Martin! Chris Samsa! And more!), ANIME OMAKASE, and our new reviews of Patron-submitted matches including Tenryu vs. Kawada from 2000 just after the AJPW/NOAH split and Naito-EVIL from the 2016 G1. Once again you can check it all out for only $5 at www.patreon.com/wrestlingomakase!

John is joined by returning guest Gerard Di Trolio (@GerardDiTrolio) as we tackle all the major tournaments going on at once in men’s puro! We start out with an extensive preview of the 30th edition of NJPW’s G1 Climax: first, we break down all twenty participants in both blocks and if we think they have any chance to advance to the final or win the entire tournament. There’s at least one wrestler here I think a lot of English-language podcasts are missing the boat on, and we discuss it in detail. Then we break down the cards for all 18 tournament shows and each give a most anticipated match of the night, and at least a few of the picks might surprise you.

Once we’re done with that we turn our attention to the AJPW Champion Carnival, which got underway this past weekend. Gerard and John discuss a surprisingly underwhelming opening two nights of the tournament, although they don’t quite agree on HOW underwhelming. We break down all the tournament matches in detail and talk a little about the undercard tags as well. We wrap up that segment with a look ahead to night 3 on Tuesday featuring a big Kento-Ashino showdown. Finally, we wrap up the show with a short preview of the NOAH N-1 Victory, as we break down the wrestlers in each block and who has the best chance of winning, plus talk about a few matches we’re excited for. We then look ahead to their opening night on Friday 9/18, previewing the four tournament matches. It’s a packed show full of tournament action, this week! 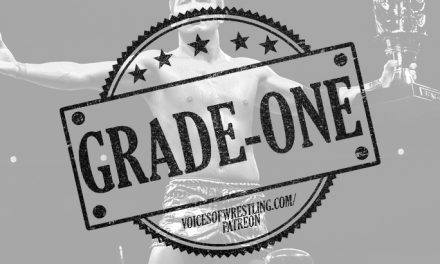