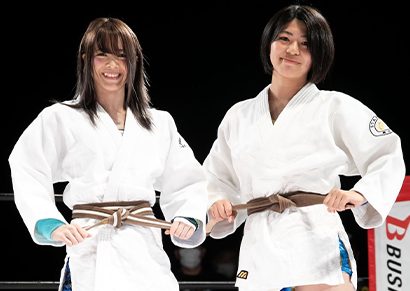 The second show after a few weeks of COVID forced cancelations brings us day 4 of the 5☆STAR Grand Prix, with a full card of fun looking block matches, including a main event between two of Stardom’s biggest future stars. On a sad note, Syuri understandably did not appear due to the loss of her mother. Her scheduled opponent will receive the forfeit victory and wrestle a non-block match on the card. All the best wishes to Syuri Kondo.


A fun opener. Watching Hanan work, you would never guess that she is just returning from such a long out of the ring lay off.  Hina and Rina spent the majority of the match with the advantage, showing off a lot of double team offense, but in the end Hanan and Mayu’s matching tails and teamwork was just too much for them, with Mayu submitting Hina with the modified dragon sleeper. **1/2

The first of the day’s block action sees a mini hoss battle sprint take place as Jungle and Saya beat the tar out of each other. I would love to see what these two would do with 15 minutes, as they filled the six and a half they were given here. Jungle gave Saya a lot, making her look like a genuine threat before destroying her with a beautiful looking lariat. From there a slam and a top rope splash gave Jungle Kyona her second straight win and her 4th point. This was really as good as it could have been with the limited time. ***1/2

This match really has me questioning the decision to increase the time limit to 20 minutes. While the extra 5 minutes will no doubt give a few extra minutes to some really good matches this tournament, it definitely hurts thing when you want to book a draw. This was a really good match that needed those 5 minutes shaved off. Saya did some good arm work, really concentrating on the body part for a large portion of the match. Himeka brought the hoss attitude, as well as her priceless facial expressions. The last couple minutes were really good, with both women showing a great sense of urgency to pick up the win. Unfortunately, there were portions of the match where that urgency completely disappeared, as they worked to kill time to reach the 20-minute time limit. This would have been a great 15-minute draw. ***

Winning her block match by forfeit, Momo wrestled Saki Kashima in a non-block match, to avoid her having the kayfabe advantage of wrestling one less match than everyone else in the block, limiting wear and tear on the body. Odeo Tai made sure to add plenty of damage to Momo, with Natsuko Tora jumping in with a chair a bit after the six-minute mark, giving up on the victory for her stablemate as soon as Saki looked to be in trouble. The referee bravely showed that you must respect the rules in Stardom, as he disqualified Saki Kashima for either the 5th or 6th chair shot. Your stablemate can jump your opponent with a chair, and you can then pick up said chair and hit your opponent with it, but watch out, after the 4th or so shot, you are starting to risk the disqualification. What was here was good, but it never really got going. **1/2

The two stablemates gave the audience their money’s worth with this match, filling the seven minutes they were given with some great action. They may be friends and stablemates, but that didn’t stop Tam from kicking Starlight Kid’s head off. I could watch these two work all day long, which leads to the obvious complaint that they could have used another minute or three, but as is, it is a perfectly acceptable sprint. Tam uses a tiger suplex to score the pin and move within 1 point of the block leader. ***1/4

Natsuko started things off before the bell, waiting for Maika to climb to the top of the corner during introductions then attacking, sending Maika and her two belts plummeting to the cold floor. On the floor, Natsuko took advantage of both the referee’s apparent lack of peripheral vision and a distraction provided by Saki Kashima to do more damage. Back in the ring, we had a few minutes of decent action before Natsuko’s chain found its way into the ring. I kept waiting for Dick Togo and his garrote wire to make his way to ringside but alas, it was not to be. Saki distracted the ref, again, so Natsuko could hit Maika with the chain, again. One Ascension later, Natsuko Tora is your winner. **1/2

This was great, with an ending I did not see coming. Konami is a great worker, and Giulia has improved an incredible amount since she first entered a Stardom ring. I fully expected Giulia to pick up the win here and move to within one of Himeka. Instead, Konami caught Giulia’s arm in the triangle armlock resulting in a near-instant submission. A good reminder that with her submission hold, Konami is a threat to every member of the Stardom roster. ***3/4

A really good match that just sort of ended. I am sure these two will main event many future Stardom shows, and I am sure quite a few of those main events will be match of the year contenders. This was building into a great match, with crisp work that had me salivating over the finishing stretch, only to have that finishing stretch never come, with Utami dropping AZM out of the torture rack into a bridging German suplex, which earned the three count. This was a closing stretch away from being a four-plus star match. As it is, I’m left feeling like I only got 2/3rds of the main event. ***1/2

Day 4 of the 5☆STAR was a weird show, and the weakest so far of the tournament in my opinion. The Konami/Giulia match was really good, Jungle/Saya Iida a fun little hoss sprint, and the main event was a few minutes from being great, but it seemed like the 20-minute draw messed up the timing for a lot of the card. This may sound pretty negative, but at just over two hours, the show is an easy watch with nothing being actively bad, which in 2020 makes it a pretty good card.