This clocked in at just over 10 minutes, a shocking amount of time for a Dragongate opener. This match flipped from professionally done opening spots to comedy and then back again by the time it was done. The comedy, Saito-inspired, wasn’t bad, but didn’t strike me as anything special. The intensity was ramped up towards the end as the teams went through a series of misfire spots leading to Gamma getting pinned with Horiguchi’s Backslide From Heaven. It is rare that we get such a breathable opener, even if the match wasn’t anything special. Enjoyable way to start the show. ***

Okuda has completely snapped. On the way to the ring, HYO had a look on his face like he knew he was about to get his ass kicked. His face was emotionless as he came down the aisle. He had every right to be concerned as Okuda began a brutal, unhinged ass-kicking as soon as the match began. Okuda took HYO down to the canvas and launched into a series of closed-fist punches to the dome of HYO which had to be broken up by the referee. HYO attempted to cheat his way into control, but Okuda had a counter for each one of his tactics. Once again, Okuda took him down to the canvas and pummeled him. The referee attempted to break it up, causing Okuda to attack him, thus ending the match in disqualification.

After the match, Okuda continued throwing bombs at the head of HYO. Dragon Dia and Ben-K attempted to break it up, but Okuda shoved them away as well. He dragged HYO to the back and presumably continued the attack there.

Kaito Ishida has urged Okuda to join R.E.D. instead of destroying them. Okuda has progressively gotten more and more heated and has succumbed to more and more rule-breaking in recent months. Okuda is in such a rough spot because of Ishida. This has been the feud of the year and it isn’t even close. This was another great chapter in the overall story arc of Okuda vs. R.E.D. NR

Just as I predicted on Open the Voice Gate, Maria scored a pin on Yoshida to continue her quest at what I presume is an Open the Brave Gate title shot. I also predicted this match would be very bad, which wasn’t entirely true, but nothing about this match was good. This is the worst possible combination of wrestlers on the roster, sans maybe Kanda, and thus they delivered what felt like a competent, albeit unremarkable match. I can’t call it a waste of time as it gave us a strong Maria finish, though. **3/4

An eight-man version of this match in Kobe last month forced Dragongate to publicly remind fans of their non-verbal cheering rules. While the intensity wasn’t quite the same this time around, I can’t help but wonder how this match would’ve sounded in a COVID-free universe as the rookies continue to bolster strong crowd reactions, especially given the current restrictions.

The prior incarnation of this match saw Fujii and Kondo teaming with Yokosuka and Doi to take on the rookies, including Sora Fujikawa who is now out with an injury. The “x-factor” in this match was going to be Ultimo Dragon, who has primarily worked in openers and then gone back to his Hawaiin shirts and Cuban cigars immediately afterward. Ultimo was now in a position to show true violence and aggression that would otherwise not fit his persona.

I expected Ultimo to bring the heat and work viciously as a way to make this match stand out from the prior battle. His interactions with the rookies were limited, however, outside of a standoff with Kento Kobune at the start of the match. The bout was once again worked off the backs of Fujii and Kondo, this time with the added wrinkle that the rookies acted as if they were on their level. The Kobe match saw the rookies desperately trying to scrape and crawl into a competitive bout. As far as they were concerned this time around, they had the skills necessary to knock out the legends.

Madoka Kikuta, in particular, the lenky, Kanazawa City-born upstart, brought his game to a new level in this match. He showed his power by unleashing a discus lariat on the legends, one that staggered Fujii and the wide-based Shuji Kondo. Kikuta got his moment to shine, just like Fujikawa did in Kobe and just like Kobune and Kamei had done previously.

He faltered in the end, however. He couldn’t survive a two-on-one onslaught of Fujii and Kondo twisting him up. He tapped to Kondo’s Gorilla Clutch, just like Fujikawa did in Kobe. Once again, the rookies have put themselves in a legitimately great match. ****

U-T replaced Strong Machine J in this match, creating a unique foursome of Dragongate wrestlers that seemingly have all represented being the top workhorse in the company at one point or another. I hope that we get more eight-man tags in the future with those four representing the Dragongate Army, or, later on down the road after the generational warfare has come to a ceasefire.

I have very high expectations for the Twin Gate match coming up at Dangerous Gate after seeing this match. Lee & Minoura are not only working higher up on the card than ever before, but they’re working with more confidence than ever before and it shows in their work. They have a huge opportunity coming up at the Ota Ward Gymnasium to steal what was already a loaded show before the post-match angle in which Doi accepted Kzy’s challenge for a singles match at Dangerous Gate.

This was one of those well-oiled-machine type matches. No other company on Earth can do this. It was missing one or two jaw-dropping sequences to put it over the top, but if this type of match happened in any other company it would be a serious head-turner. As it exists, however, despite the crispness of U-T and Kagetora, the heated interactions from Kzy and Doi, and the brewing battle between Twin Gate challengers, it was still a superbly great match capped off by Kzy cleaning Kagetora’s head off with a Running Elbow Smash. ****

Dragon Dia cannot get over the R.E.D. hump, in particular the one marked by Open the Brave Gate champion Kaito Ishida. Dia has only taken pinfalls at the hands of R.E.D. members this year. Otherwise, he’s been dominant. He owns the Toryumon Generation and he’s one of the top guys in his own unit. His issue continues to be plagued by the red, black, and yellow heel unit that just surpassed five years of existence through its various names. Dia was outmatched by Sakamoto and simply not good enough to beat Ishida, who is quickly climbing up the ranks for the longest Brave Gate runs of all-time. Dia already had the champion’s ankle lock to fear, but after eating a Tiger Suplex for the fall tonight, he needs to go back to the drawing board and figure out how to beat the champion.

As I mentioned, Ishida’s reign is quickly approaching historic territory. Assuming he carries it through Dangerous Gate, Gate of Destiny, and Kobe World, the reign will have to be looked at as completely legitimate with no COVID-qualifications. He won the title in November of last year, defended it in December 2019, February 2020 right before the shut down, and then once in an empty arena setting. That’s right on pace with the likely number of defenses he would’ve had in a normal year. This run as a champion has legitimized him more than ever before, and his interactions with Ben-K in this match only back that up.

Ben-K has won all three singles matches against Kaito Ishida in their brief history with one another – a dark match in 2017, a King of Gate match in the same building two years later, and a brief encounter in Fukuoka ACROS in the first part of a day-night doubleheader last August. I have a feeling that the next time those two get a singles match with one another, the result is going to be different. Ishida looked electric squaring off with the former top dog of the promotion. Their forearm strikes bounced off one another with such intensity and aggression. For as good as Dia has been all year, this was one of the rare instances in which his partner pulled focus for me. I was all about the Ishida vs. Ben-K interactions in this bout and going forward, I hope we get more of them. ***1/2

I wasn’t into this match on paper. I thought the booking was redundant and this main event could’ve produced something far more interesting (what that is I do not know, that is not my job). The stipulation was:

The winner of the fall in this match will earn the right to swap their entrance number with another. If they do not wish to change their own number, they could do it for another participant. For example, Big R Shimizu could win and choose to keep his ①, but force KAI to change his ② with Eita’s ③. – Dragongate English Facebook page

After what I found to be lackluster energy and poor execution of the cross-unit pairings, Shimizu scored the fall on Masato Yoshino with the aptly titled “Shimizu’s La Magistral”. This gave Shimizu, known for being one of the dumbest members on the roster, all of the power for the upcoming cage match main event on the 21st. Shimizu swerved everyone, his unit mates included, and swapped Yoshino’s sixth and final entry into the cage match with Eita’s third entry, putting Yoshino at much more favorable odds and damaging Eita’s chances of winning in the process.

The end result was entertaining. I like the new order of the cage match, I just don’t like how they got there. This was a rare misfire in a Dragongate main event, let alone one from Korakuen Hall. ***1/4

The last half of this show can be filed under “essential” viewing for all fans of the promotion. Once again, Dragongate showed why they’re the most consistent product on the planet, even when their main events dip below their usual standard. Starting from the rookie tag, the young talent, wrestlers primarily under the age of 30, put forth an effort that is so rarely duplicated in wrestling. Storm Gate is another win for a promotion that has been surging since fans returned to the arenas. 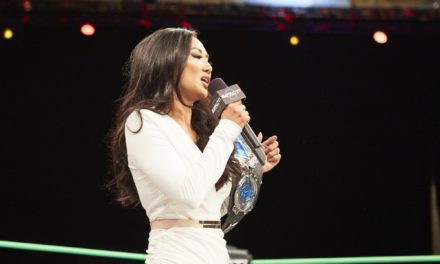