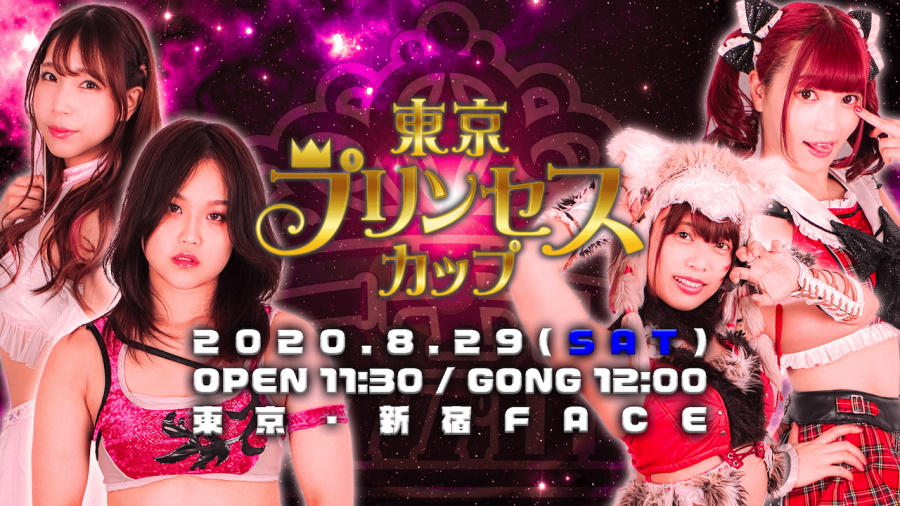 After canceling the semifinal show of the Princess Cup due to a positive COVID test, Tokyo Joshi Pro returned to action this weekend with the semifinals and finals of the Princess Cup. Whether by luck or their COVID policies and procedures, it appears that TJPW has thankfully prevented a larger outbreak among its roster. It should be a dramatic end to the Princess Cup this year, as all four of the remaining wrestlers would make sense as champion. Shoko Nakajima and Miyu Yamashita are the last two Princess of Princess champions, Maki Itoh is super over and getting pushed to the moon, and Mizuki is trying to repeat as Princess Cup champion. All signs point to a fun end to a fun tournament. Unofficial but authorized English translation thread can be found here. Big thanks to @misterhakusan for this invaluable resource.

UP UP GIRLS Performance

Other than Miu Watanabe’s trouble entering the ring, this was your basic opening performance. If the Idol performances are not for you, the entrances for the first match begin at 16:03.

Mina Shirakawa’s team came to the ring with beach accessories; a beach ball, an inner tube, and a water gun. The inner tube as a weapon played a large role in this match, which should be enough for you to decide if you’re watching or skipping this. While there was some good work at times in this match, it was offset by an equal amount of sloppy work, but once again, this was a match where people sold being hit by a child’s flotation device. YMMV. Nodoka Tenma pinned Himawari Unagi after a killswitch. **

The former Itoh Respect Army members put on a great match in the first semifinal contest. After 2 spots of chain wrestling got the crowd involved, Mizuki tossed Itoh to the floor to work her over. Unfortunately for the Sugar Rabbit, her plans backfired when she climbed the ropes to deliver a double foot stomp to the floor. Itoh caught her up top, knocked Mizuki to the floor, and took control of the match with a body slam on the outside and a Boston Crab that would have given Vince an aneurysm with how little of the action the hard camera could pick up. Back in the ring, Itoh maintained control until Muzuki was able to duck a strike and hit a backstabber. From here the two would trade control until the end, with a great strike exchange and a swinging DDT from Itoh highlighting the action. Mizuki hit the Cutie Special to advance to the finals. This was great. Maki Itoh continues to improve and will win this tournament in the future, while Mizuki is always a joy to watch. The handshake at the end, before the inevitable middle finger from Itoh, was a great touch. ***3/4

There was a point, before losing the Princess Title to Shoko Nakajima, that Miyu Yamashita looked positively unbeatable in TJPW. She was a fighting champion, meeting and defeating all challengers, and was the undisputed Ace of the promotion. Since dropping the title to Shoko however, something has been off with Miyu. With a quick exit from last year’s Princess Cup, and an unsuccessful attempt to reclaim the Princess title, the aura of invincibility was gone. Even her ring entrance suffered, as she now slowly raises an empty hand instead of the title belt. Shoko, on the other hand, seemed not to let losing the Princess title affect her as much. Perhaps it was losing the title in a 5* match at DDT’s Ultimate Party (match intro video starts at 4:21:40, entrances start at 4:25:30) in the biggest match in Tokyo Joshi Pro’s history. Perhaps it’s just that giant squirrels do not care about title belts.

The match itself was fine. Shoko was a blur of energy and Miyu was vicious with her strikes as always. The work was clean, largely botch free, and neither wrestler was the obvious winner, which always adds drama to a match. With everything in its favor, the match just never hooked me. Yamashita’s heat segments had me checking my phone, and other than one spot where Shoko hit a hurricarana on Miyu only to have the Ace destroy her with a brutal kick, nothing stands out in my memory of the match. For me, this was the definition of a gentleman’s 3. Shoko advanced with an inside cradle after Miyu blocked the second Northern Lights Suplex. ***

I never would have predicted that a random six woman tag match leading into intermission would not only get better crowd reaction, but be an overall better match than Miyu/Shoko, but here we are. This was fun from the opening handshake, as Kamifuku pushed Kiryu into a handshake attempt with Sakazaki that was never going to happen. All six participants brought something to the match, from Maiumi’s version of Strong Style to Shiori playing “babyface” in peril. Neko is great in small doses, especially with her somersault Codebreaker, Kiryu has fire and has been playing Kamifuku’s understudy well throughout the tournament. The Casual Beauty Kamifuku’s face kicks legitimately look devastating, and she always brings creative offense to the table, at one point calling Kiryu into the ring and hitting her with a drop toe hold, sending her crashing onto a prone Shiori. Sakazaki was her usual magical self, with great psychology along with her high flying offense. The sheer disdain she shows her opponents, while remaining so cheerful with her teammates and the crowd, never fails to amuse. The main target of her annoyance in this match was poor Kiryu, who twice suffered the Magical Girl’s wrath for breaking up first a pin attempt on Kamifuku, then a submission hold. Kiryu also lost the fall, after a Magical Girl Splash from Sakazaki. Maybe next time let Kamifuku get out of her own mess? ***1/4

We return from the intermission with the arrival of my new favorite random team in TJPW, Pom, Hikari, and Natsumi! Tokyo Joshi, create a trios title stat! Unfortunately, their opponents included the tag team champions, which didn’t bode well for their chances in this match. This was 10 minutes of non stop action, with Suzume taking the early heat before Miu and Rika reversed the momentum into a frantic back and forth contest. Rika’s over reliance on the missile hips annoyed me as always, but as she was barely even in the match it didn’t effect my overall enjoyment. Miu and Natsumi are great workers, Hikari and Suzume are going to be, and Pom is a pure joy in tags where her weak looking offense isn’t expected to do all the damage to her opponent. Miu pinned Pom after the Teardrop and I got my new background image of Natsumi and Hikari torturing Suzume while Pom throws up double peace signs. What more could you ask for? (Other than less missile hips?) ***

And it all came down to this.

The 2020 Princess Cup winner would either be the Popping Sugar Rabbit, or the Littlest Kaiju. Last years winner versus the former Princess of Princess champion. With TJPW’s biggest show ever approaching, Wrestle Princess on 11/7, would they set up a rematch of the previously mentioned Ultimate Party match, or allow the Magic Sugar Rabbits to fight it out for the Princess title? With either match practically guaranteed to be great, the booker was really in a can’t lose situation.

They attacked each other from the bell, and after a quick pin attempt by Mizuki, they badly botched an hurricarana against the ropes that was intended to send Mizuki to the floor. Luckily, Mizuki only partially sold it and ended up resting on the middle rope, allowing Shoko to push her out of the ring to set up the next spot, a dive by Shoko that wrecked Yuka Sakazaki, who was at ringside to cheer on Mizuki, when Mizuki got out of the way. Mizuki used this chance to hit a diving foot stomp from the apron, only for Shoko to no-sell it and quickly take back control, locking on a stretch muffler once back in the ring. A head scissor hold followed, then a camel clutch, separated only by Shoko using the head scissors to slam Mizuki’s face into the mat several times. Shoko  looked ruthless during her control periods, really selling how important winning the Princess Cup was to these women. The story of the match became Shoko’s inability to keep Mizuki down, no matter how much violence she unleashed on her. A neckbreaker on the apron, a hanging DDT, multiple submissions and strikes, no matter what Shoko hit her with, Mizuki would reach the ropes or kick out and come back for more. The finishing stretch was great, starting when Mizuki caught Shoko up top with an avalanche Cutie Special. Shoko still almost pulled out the victory with the Northern Lights Suplex, but she couldn’t hold the bridge and had to go for a normal cover, which was just enough for Mizuki to kick out of the pin. From there it was all Sugar Rabbit, with a spinning flying body block, a double foot stomp to the back, and then a huge one to the front, followed by the Cutie Special for the win. This was a great match for any Joshi fan, but for those of us who follow TJPW, this was awesome. Halfway through this, I wanted Mizuki to win so badly it physically hurt. ****1/2

While the first few nights of this year’s Princess Cup were a bit hit and miss, the final two shows were both excellent with only one disappointing match. The COVID cancellation of the Semifinals show was a shame, and I really think Miyu/Shoko could have been a great main event on that show. The main event for Wrestle Princess on 11/7 has been set, a Princess of Princess title match between Yuka Sakazaki and Mizuki, in what is sure to be a great end to the biggest show yet for Tokyo Joshi Pro. If you are really pressed for time, make sure to watch both Mizuki/Maki Itoh and Mizuki/Shoko Nakajima, but once again, this show was a breeze to watch, clocking in at 2:10 with both an intermission and an Up Up Girls performance. If you enjoy shenanigans and comedy, you’ll more than likely enjoy the opener, both six-woman tags were lots of fun, and I urge you to give Miyu Yamashita/Shoko Nakajima a chance, as from what I have heard, I am on the low end with it. This was what it should have been; a fun end to a fun tournament.