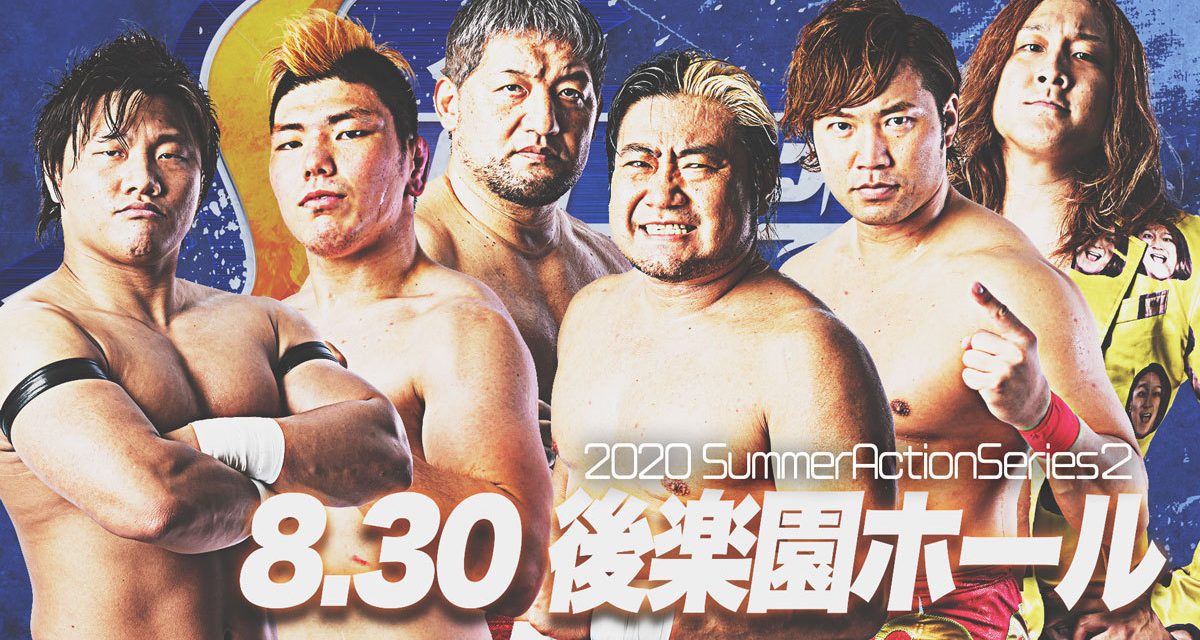 Yuma has basically gone straight from promising young boy to grumpy veteran. It’s very weird to see and he has been directionless since he turned on Kento. Maybe he is just in a holding pattern until his brother graduates from rookie status and they’ll get a push as a team. But that would seem like such a waste of prime years for him. I hope that he comes out of the CC with a clearer direction.

Akira and Hayato have been a great team so far and I expect them to get an All Asia Tag Title shot sometime this year. Fun opener that was basically a singles match between Akira and Atsuki.

Yay Ryouji Sai is back. Can’t you see how happy I am 😐

Now what I am actually happy about is the return of Carbell Ito. That man is living his best live owning his own apparently somewhat successful company so he gets to sponsor his favorite promotion and then moonlights as wrestler whenever he wants to. For a part-timer, he is actually pretty decent in the ring and his dives are always amazing. Though basically he just chucks himself over the top rope with reckless abandon and everyone has to scramble to catch him because he’s a sponsor.

Akira Francesco on commentary so we get a weird mix of Japanese and English commentary. You can feel Francesco’s nervousness so bless him he did try. Ugh on Sai is pinning Okada. Okada has just been completely lost since he failed to win the GAORA title and his slide into obscurity continues here. It is a shame as he has a ton of potential and so far All Japan is failing to capitalize on it. But I am all for Carbell Ito getting a GAORA TV title shot. So at least the segment ended on a high note even if the match itself didn’t

Koji Doi in Enfants is stupid from a storyline perspective. It was in another company but if you keep the faction then keeping the history makes sense as well. Doi was one of Enfants fiercest opponents in WRESTLE-1 and Kuma turning on him and dissolving their team was the impetus for changing his name from Kumagoro to Kuma Arashi. Not only that but he was basically continuously feuding with the faction right until the promotion closed.

With that said he’s a tremendous addition to the roster. If only they brought him in earlier he could have been in the CC. Nevertheless, he will thrive in All Japan and he has all the goods to ascend to the top of the card. We might even see KumaDoi reform in All Japan now. They were great in WRESTLE-1 and would make a great addition to the tag team scene. Good intro for Doi who got put over strong and just dismantled Black Menso-Re.

Purple Haze has grown on me. I wasn’t a big fan of them at first but now they’ve found their groove. Especially the Zeus and Izanagi tag team has been a breath of fresh air. Basically this match was two singles match with Izanagi vs Abe followed by Zeus vs Lee as the only combinations facing off here. While that’s a bit of a weird structure it was a good match anyway. Especially Jake Lee shone here as apparently someone lit a fire under him. He looked like a star in this match and had an answer for everything Zeus threw at him. Maybe this time it will finally stick. Lee is the odds on favorite to win the CC and take the title from Suwama and this match seemed designed to heat him for the tournament.

Given the current pandemic, a lot of spit based wrestlers have been hampered given that they can not do some of their trademark spots. Some have dropped them for now and some have chosen to get creative like Toru Yano using a spray bottle. As one of the preeminent spit based wrestlers, Tajiri is one of the ones affected and it seems he has found a solution as well. He will simply drag his opponent backstage and when they come back his opponent’s face is covered in paint like he got misted. Its good solution though slightly lazy but that also fits for modern-day Tajiri. Otherwise, like most modern Tajiri matches this was fairly boring. Though I didn’t go into a TAJIRI vs UTAMARU match expecting a classic so I guess it did meet my expectations.

The first of many title matches for Dan. All Japan has been giving him a strong push for someone who has only been wrestling for a year and a half. Hes clearly a special talent and has all the tools to become a star down the line. He would have to put on a lot of weight to become a credible heavyweight though. This was a very enjoyable match and served as a good introduction for Dan as a serious contender.

Iwamoto found a great balance of giving Dan a lot to put him over while still looking dominant. Iwamoto is clearly the ace of the junior division and is going to remain in that position for the next couple of years given that he is only 30 years old. After the match, we get the debut of Ikuto Hidaka in All Japan. Hidaka has long been a staple of Zero-1’s junior division and I am very excited about his match with Iwamoto.

They actually managed to keep Jiro’s intro short, which is greatly appreciated. I was really hoping for a title change here. While I do love them and they are one of my all-time favorite tag teams, the Giants have done all they can in the tag division and it would have been nice to have something fresh. There also isn’t an obvious challenger for them but then again the CC is coming up next so it’s not like we will get another tag title match for quite a while. The match itself was quite good though it took a while to get going.

Like the other tag matches today this was basically a singles match as Jiro and Suwama were in the ring for the vast majority of the match. Outside of double team maneuvers, I can’t remember a single thing that Kento did in the match. Nevertheless, this played to Jiro’s strengths and he did sell Suwama’s offence very well. The finishing sequence elevated the match as Jiro got some pretty great hope spots that I bit on multiple times before the Giants ultimately took the win. As per the stipulations, Kento now has to wear a jacket and him and Jiro have to come out to together for tag matches. I hope that the jacket stip only counts for the tags as well since the CC kicks off soon and All Japan needs peak Kento for that.

All Japan delivered on the last major show prior to the Carnival. We now get into the prime period of All Japan’s year and hopefully, it will give some of the seemingly forgotten talent a new sense of purpose.