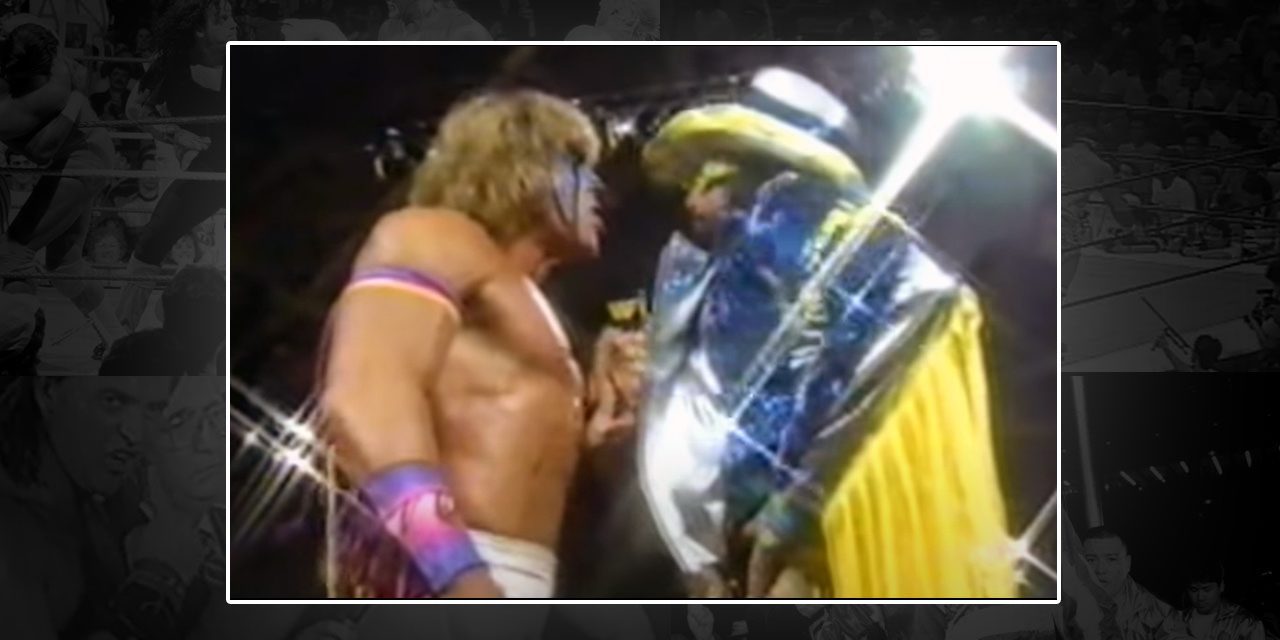 The collection of matches and segments I am watching for this series come from a 1992 Yearbook created by Goodhelmet, a longtime poster at the Death Valley Driver Forum and other wrestling places. A cross-section of the best (and worst of wrestling within a certain year), it is a great snapshot of everything of importance. The footage is taken from July 20-25.

This is a random week inasmuch as we have three matches in a row from the WWF and it isn’t even a pay-per-view show! With syndicated television largely relegated to squash matches, we only get to see what is put on Prime Time or on Coliseum Home Videos. The first match may have only been given time for the ending, but it was an important one as we see a title change! Money Inc. came up short in a tag title defense against The Natural Disasters when IRS managed to hit his own partner with a briefcase by mistake. Though this was an often maligned time in WWF tag team history, the fans are really happy to see Earthquake and Typhoon walk out with the gold.

From the same card (and a VHS tape called Grudges, Gripes and Grunts’), we get something of a dream tag match as Ric Flair teamed with Shawn Michaels to take on Randy Savage and Bret Hart. This meant that the World and Intercontinental Champion were on the same team, while playing off of the ongoing feud between Savage and Flair. I don’t believe that Hart and Michaels are feuding yet, but I do know that they are already being positioned as forever enemies even from this early stage. What felt odd about this was that Jim Ross is on commentary for a match that was taped before he joined the company, or so my research told me – I believed something was off, which could only be that I’ve not had Ross on any WWF action thus far.

Things were a little slow to get going as the feeling out process felt quite prolonged, though I did enjoy Flair taking a couple of bumps off of a Savage slap and shove. Everything felt like it was just waiting for the heat section to begin and a fairly lazy looking superkick from Michaels starts it as it put Savage in trouble with the heel duo. It is eye-opening to see Savage playing face in peril as it highlights the relative importance of the Hitman as it was all set up for him to be the white knight. Michaels was still early on in his heel shtick so was bumping all over the place to make his opponents look good when it was needed, such as the hot tag to Hart. The finish was poor though as Hart and Flair were the legal men, only for Michaels and Savage to be involved in the pin as the Macho Man rolled the Hearbteak Kid up after a collision with Sherri. This is good, but never reaches the heights you might expect.

On to our next WWF match and our next video as ‘Smack ‘Em, Whack ‘Em’ played host to a ladder match for the Intercontinental Title between Bret Hart and Shawn Michaels. I believe I may have seen this before, but having forgotten everything about it, I’m intrigued to see what the two men offered within this gimmick. This was the first of its kind in the promotion so they effectively had a blank slate to begin with. The opening exchanges are sound, yet somewhat overshadowed by Gorilla Monsoon and Lord Alfred Hayes chatting about Sherri’s weight and a tattoo she has on her breast.

One thing that is noticeably different from other ladder matches was how far away from the ring the ladder was – the wrestlers don’t waste too much time in bringing it into the ring rather than battling over it in the aisleway. Another thing was how Monsoon sold simple spots like Michaels ramming the ladder into Hart as a significant move: it was, but nothing compared to what the gimmick evolved into in terms of high spots. What both men did well was to make it a fight, rather than a wrestling match which just so happened to have a ladder involved. Though there was one awkward bump from Bret off of the ladder, a later moment that saw both men fall into the top rope was neat for the time. It made sense that the biggest bump ended the contest as Hart dropkicked Michaels off of the ladder, onto and over the top rope, leaving Hart able to get the belt. A decent match that was a road test for what was soon to come with regards to the gimmick.

Just when I thought they were over, they pulled me back in. One more vignette for Razor Ramon, this time seeing him shove a man into a water fountain as he discussed dreams coming true, aired, and I continued to die a little more inside. Debut already!

Away from the in-ring action, the big focus of Superstars – other than to eternally promote Razor Ramon – was to push the big main event at Summerslam as The Ultimate Warrior was due to challenge Randy Savage for the WWF World Heavyweight Champion. The biggest eye opener for the segment that followed in which both men joined Mean Gene was that it was due to take over eleven minutes: a significant chunk of syndicated television. Unfortunately, the video quality of what is on the set isn’t great, meaning it periodically cut out as each man was talking. You get your normal intense deliveries from both Warrior and Savage, yet things picked up when Ric Flair and Mr. Perfect wandered down to the ring to get involved.

It was rare for the promotion to do these multi-part promos, especially with one pairing in the ring and others on the rostrum with Gene. Flair’s frustrations that the two men were talking about being the best and overlooking the Nature Boy get the better of him as he stated that he could beat both men that very moment if they stepped into the ring with him that moment. Mr. Perfect’s proclamation that Savage was the ‘Macho Chicken’ ended up being enough to turn this physical, with Warrior having to eventually save Savage from the inevitable two-on-one beatdown. This was layered in a way that was a step beyond what I often expected from the WWF, especially as it finished with Warrior holding the WWF Title and the two men squaring off. The enemy of my enemy is my friend vibes, that’s for sure.

It wouldn’t be Memphis without booking the same match several weeks in a row, so we get another Eddie Gilbert versus Ricky Morton match. Not that I am complaining as the action with both men has generally been fun to watch. This was a short clip to highlight what happened at the end of the match: Gilbert sent Morton over the top rope and onto the referee, meaning that Morton’s eventual pin after punching Gilbert with his own chain went unseen. This was all about the families once more as it ended up being Doug Gilbert who saved his brother, wiping out Morton with a boot and gifting Gilbert the Global Heavyweight Title back. Nothing spectacular, but good to keep abreast of what was happening in that feud.

Over to WCW and it is Jesse Ventura celebrating with the new WCW World Heavyweight Champion, Big Van Vader and his manager, Harley Race. This was a short promo that proved primarily that Vader needed Race to do the talking – Race sold his man as a monster, while Vader’s words about stealing people like Sting’s lunch money felt awkwardly delivered. Ventura’s proclamations that Vader would be champion for as long as he wanted to be were soon to ring pretty cold as well with the benefit of hindsight.

The in-ring action from the promotion was limited to one match this week as Nikita Koloff challenged for the United States Title as he took on Ric Rude. This was joined in progress and between a bear hug spot and some awkwardness in transitions (a crucifix by Rude reversed into a Samoan drop, a missed dive off the second rope by Koloff), it didn’t start too well. Where things do begin to pick up is where the heat is built for the big Koloff comeback. However, things were always likely to end in a screwy fashion as Madusa got involved to save her man, before Koloff chucked Rude over the top for the disqualification. The best thing about this match was the aftermath as the men brawled all the way back into the locker room as their altercation swallowed up several other wrestlers to finish the show with a mass brawl.

The last footage this week takes us to Smoky Mountain Wrestling as Bob Caudle and Robert Gibson talked about Jimmy Golden and Robert Fuller’s actions from last week. Luckily for Gibson, Ricky Morton has lost the gold in Memphis and is ready to come to Smoky Mountain! A pre-taped promo by Morton was actually a lot better than I expected, as Morton explained his poor choices in the past while simultaneously talking up how good they were as a tag team. This segues straight into a Golden and Fuller interview as they questioned the type of person Morton must be to leave his friend laying and whether he can even wrestle for the promotion. Bob Armstrong, always around when you need a quick ruling, joined proceedings to say that the Rock and Roll Express shall ride again.

We then head to Down and Dirty with Dutch Mantell as he headed on location at the less than impressive locale of the Dirty White Boy. Mantell was great to begin with as he had a dog on a leash just in case he got attacked by anyone, person or animal. This was all to build to DWB versus Brian Lee, with the SMW Title on the line. If Boy loses, he would have to leave the territory, though he was pretty adamant that the belt was going to end up around his waist. I loved Mantell in this as he was thoroughly disgusted by Boy in a way that it was rare to see when heels joined up with heels.

The clips from SMW finished with Jim Cornette quickly promoting the barbed wire match between the Heavenly Bodies and The Fantastics that was due to take place at Fire On The Mountain. Really short and nothing special.

A surprisingly heavy in-ring week when it came to the WWF with an interesting mix of a ‘dream tag’ and a prototypical take on a gimmick match that became somewhat ubiquitous. Otherwise, there wasn’t a lot happening here as things continued to tick over. Next week, join me as I escape the US borders and tackle some other wrestling from around the world as That Was The Year That Was.