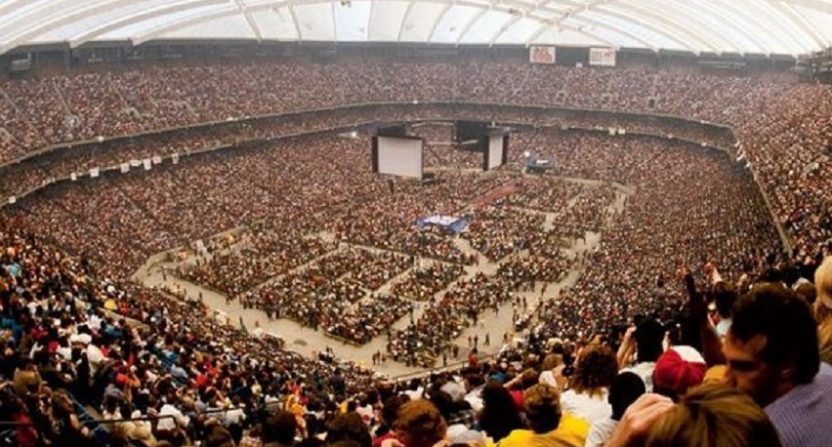 WrestleMania III has taken mythical proportions in wrestling history. Every wrestling fan has the image of Hulk Hogan vs Andre the Giant and the ending of the match, Ricky Steamboat vs Randy Savage for the Intercontinental title, the Pontiac Silverdome, the motorcar moving a waving Andre the Giant while he is being pelted with trash, and there’s the years-long discussion of how many people were really there. Yet, the same could not be said of WrestleMania II, an underwhelming event. What happened between WrestleMania II and III that helped make the third iteration of the event a historic one? Which were the pieces that created the perfect storm of events, storylines, and wrestlers? Liam Byrne, a VOW contributor, answers those questions with “Bigger! Better! Badder! – The Road to WrestleMania III.”

If you have been a fan for years or your knowledge of 80’s wrestling is limited, this book is a great bridge to relive the year 1986 to 1987 and a great way to understand how WWF worked back in the ’80s. You’ll notice immediately that the same pieces that made WrestleMania III successful were already there at the time. It took important booking decisions, especially when they had real-life surprises, and an important roster of capable wrestlers being put into perfect positions and letting them do what they do best. 80’s WWF is a completely different world from modern WWE, and I would recommend newer fans to read this book and see how this world used to be. It is important to see how feuds were handled and how they prevented overexposure, which is something really hard to do today.

Before the days of eight hours of weekly content, the WWF worked with two weekly syndicated weekend shows and a loop of various arena shows around the U.S. Some of the arena shows were televised and broadcasted on the local channels of the state they had the show in. Depending on the market where you lived, was the card you received. New York and Philadelphia weren’t getting the same card from Omaha or Rhode Island. The weekly weekend syndicated shows were for promos and squash matches, with the occasional big match thrown in to surprise viewers.

Another thing you will see is the booking. Hulk Hogan and Randy Savage weren’t 50/50 champions. An opponent did not beat a champion in a non-title match to then get the title match. Hogan and the other champions were dominant and always won. When there was a title match or an important feud had a match on an arena show, those ended in DQ or count out or in inconclusive endings, since the payoffs always happened in the big markets or big events. Feuds lasted longer than usual since there was not a crazy amount of content to fill up on TV. For example, Savage and Steamboat wrestled a lot on arena shows before going at it at WrestleMania.

The way that the book succeeds in explaining how everything worked is by giving a detailed account of the years 1986 to 1987, from the end of WrestleMania II to WrestleMania III and the fate of the participants. Not only do you get the recollections of big cards and promos from the TV shows, but also what was happening on the arena loops in detail. You will find the backstage stories of the feuds and fan reactions to these. There are even newspaper columns referenced to show how a lot of the mainstream outlets were covering the WWF. Byrne uses this information to show you the road to WrestleMania III and why it became the mythical show that we still reference today.

Some of the other information that you will find is the insane WWF schedule over the United States and Canada, Andre as a special enforcer under a mask as part of the Machines, Roddy Piper leaving and then coming back to retire again, and the start of the memorable ’80s WWF tag team division. Important feuds that you will read about is the quest of Tito Santana failing to get the Intercontinental title against Savage, Hulk Hogan vs Paul Orndoff and how they took the main event mantle the second half of the year, Jake Roberts vs Ricky Steamboat, Randy Savage vs Ricky Steamboat, and Piper’s Pit vs The Flower Shop, Roddy Piper vs Adrian Adonis in a feud that is straight from its time. Obviously, you’ll get the legendary feud of Hogan vs Andre in detail on how they played it perfectly.

If you have been watching wrestling since the ’80s those feuds and names are definitely giving you nostalgia, and if you are a newer fan you probably know the names or the feuds. This fact proves how important this year was for the WWF, which is a year where they found a groove and had fans excited and were a box office success everywhere. They even had an 11.5 rating on Saturday Night’s Main Event.

All of the top names felt important and people cared about them. Almost all of the matches at WrestleMania III had a story behind them. Whether you like WWF’s wrestling or not, you can’t deny that they had a home run with wrestlers that people cared about and simple storytelling that was big.

This book is perfect for those newer fans that had only known one aspect of WWF/E and the sameness of the last 15 years. There was a time where things were different and where the WWF was not only a box office success, but critically too.