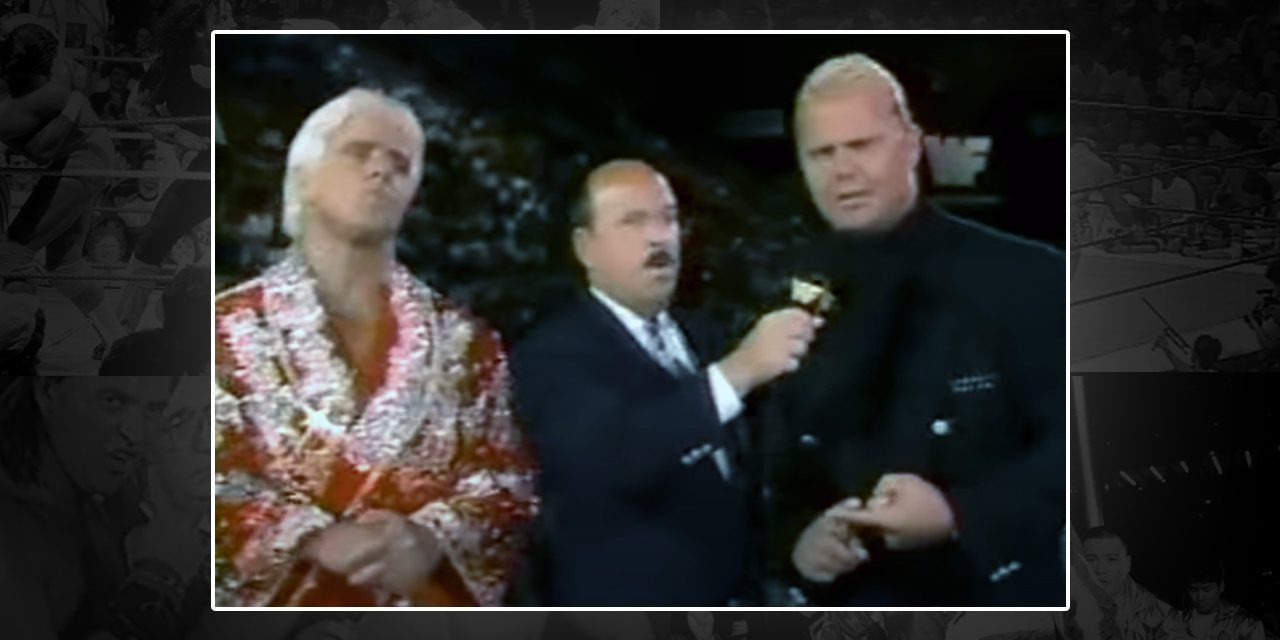 The collection of matches and segments I am watching for this series come from a 1992 Yearbook created by Goodhelmet, a longtime poster at the Death Valley Driver Forum and other wrestling places. A cross-section of the best (and worst of wrestling within a certain year), it is a great snapshot of everything of importance. The footage is taken from July 17-19.

Depending on the days I am looking at, you can sometimes get big chunks of action from one promotion, or a more evenly split and arguably more interesting selection. That is what I find in front of me this week as Japan, Mexico and a number of different promotions in the US all have a little something to offer in terms of in-ring action. Let’s get straight into the action.

The first match takes us over to All Japan as Stan Hansen teamed with Johnny Ace to take on Kenta Kobashi and Mitsuharu Misawa. I’ll be completely honest inasmuch as I’ve never seen an Ace match at all, so I’m at least excited to see what he offered. This was joined in progress with Hansen already applying a rear chinlock a couple of minutes in which makes it hard to work out how far into the match it already is. My first real introduction to Ace was him taking a plancha and a suplex at ringside from Kobashi, moves that the fans loved. Though Ace seemed to be positioned as the weaker link of his duo in the beginning, the team of Misawa and Kobashi were able to isolate Hansen for a stretch. This only angered the big man as he took the first opportunity to leather Kobashi with three chair shots at ringside. I felt sorry for Kobashi; Hansen wasn’t messing around with the chair. Nor was he messing around when he followed up moments later with a powerbomb.

Misawa kicked out of an Ace Crusher – unsurprising he kicked out of an Ace pin, but surprising that Johnny used his ‘finisher’ for a nearfall. The match built to Misawa versus Hansen as that was the overarching feud and it was the native who came out on top of the exchanges against the Triple Crown champion. Unfortunately, though he had shown he could hurt Hansen, Misawa ultimately fell to a lariat from the big Texan. A decent match with a fun last three minutes which worked well to stoke the hatred between Misawa and Hansen.

I might be wrong, but it does feel like there has been a lot more AAA lucha recently than CMLL on the set. This is about to be addressed as we get two lots of action from a CMLL show, starting with Lizmark versus Satanico. I tend to take matches at face value rather than do masses of research, but I know nothing about either of these two really, so did a bit of digging. This was for Satanico’s NWA World Light Heavyweight Title and many of the matches from their first recorded match in 1982 to what appeared to be their last match in 1998 were for title belts.

My understanding with lucha matches that are for titles is they lean more towards the ground-based grappling style rather than the more heated apuestas matches. The primera caida definitely tended towards this, though there was some definite ill feeling as they squared up after some fairly even grappling on the mat. Lizmark’s big focus was his opponent’s back, an area he continued to target until drawing the submission to win the primera caida. The segunda started at a fast lick as Lizmark launched himself at the champion in an attempt to try and wrap things as quickly as possible, including a plancha that the fans loved. This played neatly into the finish of the segunda as Lizmark collided hard with the turnbuckle after missing a charge, allowing Satanico to put him away clinically with an interesting arm submission.

Interestingly, they return to the mat for the tercera caida, though this time there is a bit more venom in the holds as they actively seek submissions from the get go. A weird spot with Lizmark landing a fisherman-syle suplex on Satanico, yet the referee not counting, does hurt the momentum a little bit. Unsurprisingly, the struggle and transitions between the two fighters are excellent, though the match never quite kicks into the higher gear I expected from it. Satanico was also a step above Lizmark for the most part, meaning a tercera in which Lizmark was the focus possibly hurt it a little. The finish was interesting, but executed poorly – a surfboard by Lizmark ended with both men in a pin, only for both to end up with their shoulders off of the mat by the time the ref counted three. Satanica was awarded the win, yet it all looked a bit wonky personally. A good match, if lacking that extra gear to make it truly special.

The second match from the card was hair versus hair as Vampiro took on Pirata Morgan. I don’t think I’ve ever seen Vampiro from this time period whatsoever and the first thing that struck me was how skinny he looked. He had definitely bulked up by the time he was in WCW. I’m assuming this is the tercera caida and the crowd are hot for the action as Vampiro landed a seated senton off of the apron shortly after landing a superplex as the big spots are getting whipped out. Morgan had used a whip and takedown to dump Vampiro for a submission once; a second attempt saw Vampiro turn it into a small package for the win. This was an interesting snapshot of not just Vampiro, but CMLL at this point as the crowd were packed in and hot for both matches. It is worth noting that Pirata and Vampiro both have impressive heads of hair, so this was a hair versus hair match with some stakes.

The announcement of SummerSlam in London on WWF Update was interesting to see on WWF television, especially as they incorporated some news coverage from the time. Even though I am from the UK myself, it always surprises me how posh the people shown on television sound – the plummiest of plummiest accents. We get a brief British Bulldog promo putting over how he is from the UK and therefore has that as a plus compared to other wrestlers. The Director of Wembley Stadium also suggested that this was like stealing the World Series from America, which might be a bit hyperbolic. With the main event announced as Randy Savage versus The Ultimate Warrior, things can begin to kick into gear in terms of promotion for the show.

Mean Gene was all over the show in these days and his next role in terms of our enjoyment is to talk to a returning Big Boss Man. This was all about how bad Boss Man felt after the abuse that Nailz had given him and to give him his due, Boss Man is decent enough on the stick as he talked about how the hug of a six-year-old made him realize that he had to make Nailz pay. Shame it is good work for such a poor storyline. It is worth mentioning how good Big Boss Man looked at this time. He must have been at least 100lb lighter than when he debuted in the company.

I hoped they were over, but they are not: a Razor Ramon vignette was next. This time he was on a beach and threatened to kick sand in people’s faces. Man – just debut already!

Having had some fun last week when it came to Eddie Gilbert and Ricky Morton in Memphis, we get to see what happened when Paul Morton was the special guest referee at the Coliseum. There are only about thirty seconds of the actual match as an errant Gilbert punch (with chain in hand) missed Morton and saw the Rock and Roll Express member win the Unified World Heavyweight Title. Hot Stuff was never likely to take this laying down and a wild scene saw him handcuff the new champion to the ropes, punch Eddie Marlin in the face, and piledrive Paul Morton. This lead to a heated exchange in the studio with Marlin and Gilbert as the new champion was fined $5000 for his antics. While Gilbert laughs off the fine, he wasn’t laughing much after Ricky came out to interrupt a match against Tony Falk. Morton not only chased Gilbert away, but promised to stump a mudhole in Gilbert and walk it dry. This was all to set up a match with no referee and was a good development of the Gilbert/Morton feud.

The small chunk of Smoky Mountain Wrestling this week started with a contract signing between The Fantastics and the Heavenly Bodies. Bob Armstrong was in the ring alongside the two teams and Jim Cornette, and it is the Bullet who sold how wild the feud had been up until now. His idea? To ban Jim Cornette from ringside and stick barbed wire ten feet high around the ring. Unsurprisingly, this doesn’t go down well with Cornette, who immediately threatened to sue Armstrong. However, Bobby Fulton of all people ended up overriding the Bullet’s idea by suggesting that they were the better team and would win no matter where Cornette was. With one stipulation out of the window, Armstrong finished the segment by announcing himself as guest referee instead. A fun little segment that did a great job at selling the match, the feud and the stipulations.

Having seen what Ricky Morton was up to in Memphis, we got a clip of Robert Gibson in SMW as he took on Jimmy Golden. Another ‘finish only’ clip, I always expect something notable happened to make it worth being on the set yet not as a full match. That is arguably what we got as Robert Fuller came out to make his SMW debut and save Golden from a pinfall. The post-match beatdown, incorporating a leather belt and a cowboy boot, was vicious and this made for a very effective introduction.

To finish off, we rejoin Mean Gene as Ric Flair and Mr. Perfect are given their opportunity to discuss the Ultimate Warrior/Randy Savage main event for Summerslam. Unsurprisingly, neither man was very happy as Perfect ran down a number of different ways that Flair has been slighted in his time in the WWF. Flair’s initial frustration was at the Ultimate Warrior, yet things inevitably turned to Savage and how the title shot should have been his. I like how Flair talks about how ‘we’ will be the champion, really selling the point that Flair and Perfect are a team.

A fun and varied week of action that trended towards good, if not great. Being a big Eddie Gilbert fan, I particularly enjoyed the stuff in Memphis, while the in-ring action in All Japan and CMLL was solid, no messing about wrestling. Join me next week as we have a sudden run of WWF action as That Was The Year That Was.