This week on Wrestling Omakase we talk the second week of NJPW Strong featuring the New Japan Cup USA semifinals, the Atsushi Aoki memorial Korakuen from AJPW and a truly awesome start to the STARDOM 5STAR GP.

The Wrestling Omakase Patreon is the best mix of modern puro & historical coverage your five dollars can buy. Head to http://patreon.com/wrestlingomakase where you can listen now to five exclusive 5 Matches episodes that you can’t find on the free feed (including our latest episode with Todd Martin from last week, covering Tanahashi-Shibata from 2014, Kobashi vs. Takayama from 2004, SUPER DRAGON VS. NECRO BUTCHER and much more!). Plus you’ll get access to four episodes of tournament coverage for the 2020 King of DDT and Tokyo Joshi Princess Cup, our series covering every Naito-Ishii match in history (which just reached the halfway point, the main event of Wrestling Dontaku 2016), our review of the controversial Sengoku Lord show, ANIME OMAKASE~! and a whole lot more. You can get access to all of our bonus audio for only $5 per month, so sign up today!

John is joined by returning guest TJ (@aspir_) from the One Wrestling Podcast (@onewrestlingpod) to break down shows from three different Japanese promotions. We start with week 2 of NJPW Strong, New Japan’s US studio show, as we talk the semifinals of the New Japan Cup USA and two fun tag team matches featuring some new and returning faces. We then turn our attention to All Japan for the first time in a while, talking their August 15th Atsushi Aoki memorial show from Korakuen Hall. We also discuss where things stand in the promotion in general as we rapidly approach the start of the Champion Carnival. Finally we wrap things up with the first two nights of STARDOM’s 5STAR GP, also from Korakuen on 8/8 & 8/9, and one of these two shows was a bonafide Show of the Year contender. You’ll have to listen to find out which one.

Everything Evolves 5: EVOLVE 88 and 89 Previews 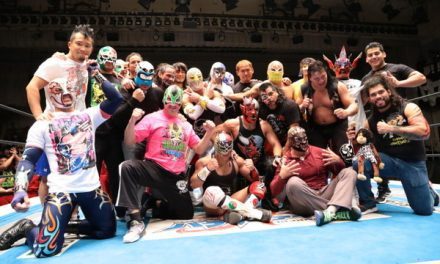