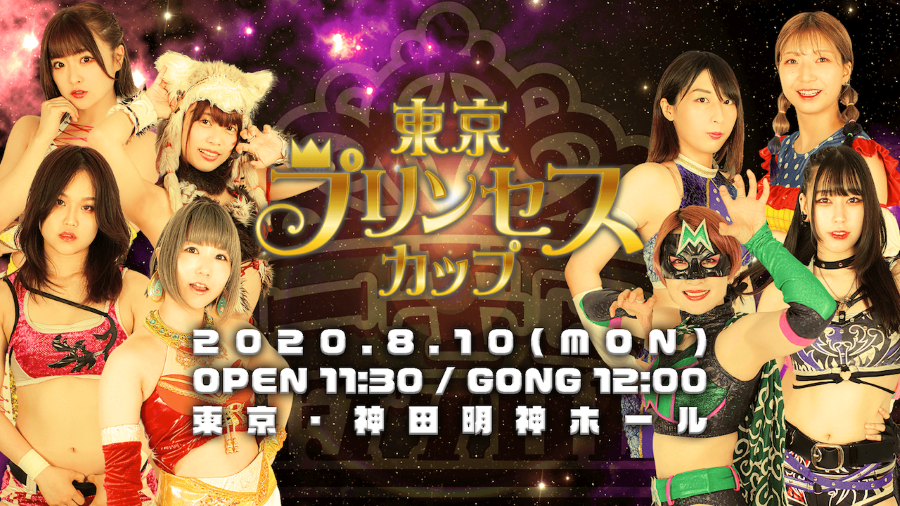 The third night of the Princess Cup sees us back in Kanda Myojin Hall for another single-cam show. Will they run with the momentum from the last show and put on another good show, or fall back into whatever funk affected night one? One thing is for certain. At the end of the night, the quarterfinals for the Princess Cup will be set.

The crew seemed to have an extra spring in their step as they performed tonight. I’ll mark that as a hopeful sign for the rest of the night.

The J-Pop side of tonight’s show is doing great, as Maki Itoh seemed especially into her entrance performance tonight. After working singles matches the previous two shows, perhaps she was just happy to have partners to pump their arms along with the music, or perhaps she just knew the entrance would be the highlight of her night? The match was comedy heavy up front, with one fun spot where Tenma and Aino picked Neko up by her limbs, swung her to and fro, then gave her the heave-ho into a splash onto Unagi. That, along with Tenma giving Unagi a spanking, was the high spot of this aggressively average opening tag. Yuki Aino picked up the win for her team with a reverse DDT. **

Mizuki can be such a brat in the ring, and I love her so much for it. Whether she’s counting along with the referee’s five-count, using body language to let him know what she thinks about the five count, or even scolding the referee for daring to try to hold her to the rules, her actions are pure joy. While I enjoy Riho’s work, I really think AEW made a mistake by not bringing in Mizuki as I think a western audience would go crazy for her. As for the match, they worked it almost completely different than the three-way on night two, as after one brief three-way test of strength they tossed a competitor to the floor. Other than a brief period near the end of the match, they worked the entire triple threat with one wrestler chilling on the floor as the other two worked in the ring. This was a Mizuki spotlight, as she was involved in just about every spot, so if you are a fan, you will definitely want to check this out. Mizuki used a double foot stomp on Shiori to score the pin. **1/2

In tag matches, Pom is a colorful blur of pure joyous energy. Sure her offense is weak, and she is a bit clumsy, but she’s fun and besides, her partners are there to provide the work. In singles matches, though she can’t rely on her partners to round out the package, and mercifully they kept this one under 5 minutes. Maki hits the Backlash to move to the quarterfinals in a match that is challenging Neko/Suzume for the tournament’s worst. *

From challenging for the worst to challenging for the best, they sent the fans to intermission on a high note. Kiryu and Nakajima put on a great back and forth match that had the crowd invested. The littlest kaiju had two opponents for this match, as not only did she have a determined Mahiro Kiryu to deal with, but she also had to fight her costume as part of her top seemed to break at one point. How she avoided the dreaded “wardrobe malfunction” while fighting out of a Boston crab I will never know. Once escaping she made a quick adjustment that seemed to last the remainder of the match, but once it was over you could tell how close the top was to complete failure, as both straps were gone, making her work all the more impressive. Kiryu hit a huge spinebuster for a near fall, but in the end, it was the northern lights suplex from Shoko that earned the three count. ***1/4

With the number of wrestling promotions around today, along with the countless other forms of entertainment vying for your attention, you have to stand out and give the fans something they cannot get anywhere else. I feel pretty safe in saying that only in Tokyo Joshi Pro Wrestling will you see two gravure models walking to the ring accompanied by a hakama clad student of Japanese culture to the sounds of a nursery rhyme. This was an enjoyable six-woman tag that brought the crowd back hot from intermission. While wrestling purists would find much to hate, wrestling purists are probably not watching much TJPW anyway. With the way she towers over the rest of the roster, it amazes me every time I remember Kamifuku’s listed at only 5’8. Her head kicks look great, as does her inventive head-scissor cutter. Miyamoto continued paying her dues, once again taking the silliest moves in her opponent’s arsenal. She eventually ate the fall after Tatsumi hit her with the missile hips and a Twist of Fate, but Moka showed great fire against Rika, and her crisp exchanges with Suzume have me looking forward to the future singles matches that will surely take place as the two young ones continue their careers. ***

This was my most anticipated match of the night, as Hikari Noa is my favorite member of the Up Up Girls, and Miyu Yamashita, well Miyu is the ace of TJPW. What we got was a good match, but one that never moved into a higher gear. Miyu spent the first 5 minutes  working Hikari over, at times with a distinct lack of respect towards her young opponent. One notable spot saw Yamashita deadlift Noa into a gutwrench gutbuster before kneeling on her gut for the cover. The disdainful way Miyu was acting foreshadowed her being taught a lesson in underestimating your enemy, with the question really being whether she would have to lose to learn. Noa seized the opportunity when it presented itself, ducking under a weak strike to to take control with dropkicks to the knee, chest, and head of the Ace. One rolling cradle and a submission attempt later, Yamashita decided she wasn’t having fun anymore and started trying to end the match at every opportunity. Two times she had Noa up for the Attitude Adjustment, and two times Noa escaped, gaining confidence with every reversal and near fall. The fans wanted the upset and thought they had it when Noa scored a deep two count off a figure four cradle, but it was not to be as Yamashitia pulled off a desperation skull kick that took Noa’s head off to set up the pin. ***1/4

While not a fan of shenanigans in serious wrestling such as New Japan, being a fan of TJPW means at some point you are going to see a wrestler ride their opponent down the Korakuen steps like a sled, and I for one am fine with that. While this match had no sled riding, it did begin with one of the most legitimately funny spots I’ve seen in a while as our paragon of peace and love, Hyper Misoa, dropped multiple foreign objects in the middle of the ring before the bell had a chance to sound. As Sakazaki helped the referee clean up the mess, no doubt wondering why her opponent had a deck of cards and a baseball, among other things, hidden in her tights, Hyper Misoa used the distraction to produce a can of cold spray and spray it in the eyes of the Magical Girl and immediately go for a cradle! If she happened to be watching from “France,” I am sure Sakisama was proud of her former protégé. More cold spray, a foot on the ropes for leverage during a pin attempt, and yet another can of cold spray, when Hyper Misoa duct-taped Yaka Sakazaki’s legs to the corner post and hung her upside down, it was apparent that this would be a match to make Yano proud. And in true Yano fashion, the corner padding was undone and became a “devastating” weapon. Once the corner pad was reinstalled, they actually settled down into a wrestling match, with Sakazaki viciously going after Misoa’s leg. After trading control for a bit, Misoa once again removed the corner padding and it paid off for her finally, as she knocked Yuka into the exposed steel and followed with a high knee. While going for the Vanitas, however, her leg gave out and it looked like the Princess of Princess champion was on her way to another victory as Yuka nailed Misoa with the merry-go-round and climbed the ropes for the Magical Girl Splash. The power of Peace and Love couldn’t be denied tonight though, and after getting her knees up to block the splash, Misoa used a La Magistral to pick up the upset and move on to the quarterfinals! ***3/4

Not as good as night two, night three was still a fun night of Tokyo Joshi’s unique style of wrestling. While none of the matches could be considered “must watch,” the only bad match was very short and it even contained enough humor to justify its existence. The quarterfinal matches look great and give me high hopes that the best of this year’s Princess Cup is still yet to come.  Those matches will be:

Depending on how hard they want to work and how much time they are given, all four quarterfinal matchups have the potential to be great, and with the names still alive, the semifinals and finals should be amazing. 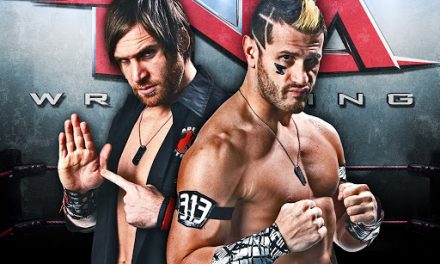