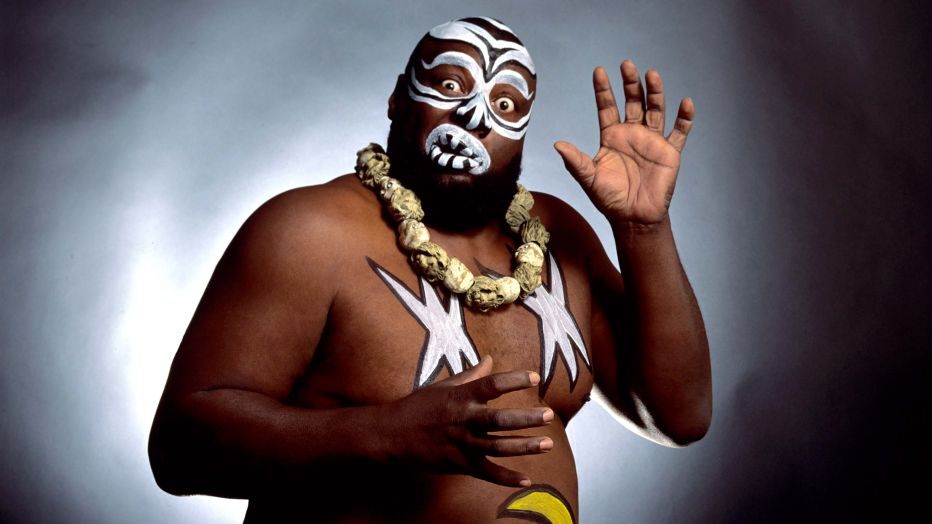 There’s a Kamala figurine on my bookshelf. It stands next to a number of UFC figures I bought when I cared more about mixed martial arts than I do now – Wanderlei Silva, Jon Jones, Georges St. Pierre, Don Frye take up spaces beside him. Considering I used to have a whole host of them when I was younger, it is the only wrestling “toy” I have left.

It was actually a gift. Someone on a forum I go to bought it for me as a “Secret Santa” gift. It was easily one of the best gifts I’d received in taking part year after year. Though the guy knew me and I knew him from time spent away from the board, picking out a gift for someone you only really communicate with via posts on an internet forum is difficult. Searching through my recent post history, he must have seen me post about Kamala in a thread about a concept called the “Absolute Boy” and picked the figure up off of the back of this research.

What the thread aimed to celebrate were the wrestlers that people liked who weren’t conventionally “good at wrestling.” The wrestlers you liked no matter what they offered in terms of moves, workrate, match quality – all those concepts that had seemingly become shorthand for what makes someone “good at wrestling.” Kamala wasn’t a guy who offered any of these things really, so I felt completely justified in celebrating my love for him, largely turning a blind eye to the backhanded compliment nature of my post and the reality of the situation.

The reality of the situation? James “Kamala” Harris was a good wrestler.

Maybe we wouldn’t call Kamala good by modern-day metrics or what we categorically call “good wrestlers.” However, the gimmick Kamala was a phenomenon that drove fans through the turnstiles. Some would argue that is the only metric that matters.

Like a lot of wrestlers who came to fame but existed beyond the territorial days, I first came across Kamala when he was past his peak as he returned to the WWF in 1992. The “1992 Year in Review” VHS was one of the first I owned and it included his feud with the Undertaker. I was still at the age where an undead mortician facing off against a savage in a match where you win by putting someone in casket was cool, so I wasn’t unduly put off by matches that weren’t much fun no matter how you slice them. I also didn’t have the historical notion of what Kamala could be like, thus had no reason to feel let down by this watered-down offering.

It is only as you begin to look back over the course of his career that you can begin to see the value he offered to the promotions he worked for. Though a principled man who walked out of several promotions due to issues surrounding money, his was a character that worked its best in short bursts anyway. This meant that whether the movement was due to the booker or Harris’ own desires, a fresh Kamala run was something to enjoy.

Starting his time as Kamala in Memphis, Harris worked a number of the biggest promotions going: Mid-South, World Class, the WWF, and JCP all found an opportunity to incorporate him into their roster for a time. He even took the gimmick over to Japan, whilst some of my own personal favorite moments in recent wrestling fandom involved checking out his work in CMLL in 1990 – well worth a look to see Harris having a blast amongst the luchadores.

His biggest runs in terms of his own profile were both in the WWF as he played the foil to Andre the Giant primarily during 1984, before returning to be a lucrative opponent for Hulk Hogan at the tail end of 1986. These matches were fun sprints that utilized both Harris and Hogan in the best possible manner for the time: Kamala brutalized the champion with help from the Wizard and Kimchee, before the ‘Hulk up’ and Hogan victory that the fans had come to see. Sandwiched between Hogan’s spats with Orndorff and then Andre, this perhaps gets neglected in comparison, yet it was a money-spinning feud. The fans not only wanted to see Hogan, but were enamored by the monster from Uganda he was due to defend the title against.

Two things helped Harris the most during his run as Kamala. Firstly, he completely sold the character from the moment he walked through the curtain. Whatever you may think about the lack of racial sensitivity the gimmick represented, Harris did what he was meant to represent in an effective manner. He was imposing and frightening on his way down to the ring, confused by the rules of the ring and what was expected of him, brutal in his beat downs. Every layer built and built to create a great overall package.

The second thing was the quality of his squash matches. Whether in the WWF or in other territories, a Kamala squash match was a thing of beauty. Sure, it was mostly just overhand chops and the big splash, but they looked really impressive. Rumor had it that Lawler suggested the chops because Harris’ punches were so poor looking. Whether that was the case, the overhand blows were an effective strike that stood out from the norm. His big splash finisher was also great. It wasn’t a standard big man splash either; he looked like he was trying to drive his opponent through the ring with it. If the fans were lucky, they’d get to see him unleash a top rope splash, an impressively athletic move for someone his size.

Time wasn’t kind to James Harris as he largely seemed to fall out of love with wrestling and began to suffer from long term health issues. Fundamentally, having read his biography and listened to a number of shoot interviews with him over the years, he came across as a good person. It is always sad whenever a wrestler you enjoyed passes away; it is all the more poignant when they were a good person beyond their time in the ring entertaining the myriad fans who supported them.