New Japan was back to their usual setup at Korakuen Hall, now that fans were allowed to come back to events (socially distanced and at a limited capacity, of course). The opening contest saw Tenzan and Kojima pick up an expected victory over the young lion duo of Yota Tsuji and Yuya Uemura. This was a perfectly solid tag team affair. TenKoji did all of their usual offense, while the young lions got their moments to shine, as always. The young lion team seemed to have the edge late, as Tsuji hit a big spear on Tenzan to stop him from breaking up the Boston Crab that Uemura had locked in Kojima. Of course, Kojima got out of it, and he had a nice sequence in the final minute or so with Uemura before putting him away with Cozy Lariat. With this win, Tenzan and Kojima are now 2-0 as a team since New Japan’s return from the coronavirus break, so it’ll be interesting to see if this win streak leads to anything. ***

Out of all the possible pairings that New Japan could put together for their multi-person tag team matches, CHAOS vs. Sekigun/Hontai/Taguchi Japan is by far the most boring. That’s especially true now that they’re so closely aligned. There’s just nothing to really sink your teeth into, since there are no ongoing feuds in this particular match. The wrestling itself was fine, and that isn’t much of a shock, since you’ll rarely find one of these multi-person tag team bouts that’s bad. We got the usual Taguchi comedy spot where he makes his team “run the bases”, but then he turns around and misses the other team gaining the advantage, leading to Taguchi getting cornered. I guess the biggest note is that Makabe actually took a bump here, as he ate a spear from SHO in the latter portion of the bout. Yano scored the win for CHAOS after Gabriel Kidd was on the receiving end of Yano’s usual shenanigans. **3/4

When looking through the entire card, this was definitely one of the matches that had some potential on paper. Ultimately, it proved to be one of the better bouts on this show, and it did a nice job of building up the NEVER Title match between Shingo and El Desperado. Of course, Desperado stole the actual title belt from Shingo at Dominion, and the animosity between the two rivals led to a brawl breaking out straight away. There was some good action in the ring once things settled down a bit, but they brawled to the outside once again, and this is where Desperado targeted the knee of Shingo with a number of chair shots.

The duo from Suzuki-gun managed to isolate SANADA for a bit until Shingo was able to return to the ring. Even though El Desperado managed to do more damage to the knee of Shingo, the team from LIJ still managed to pick up the victory, as SANADA got DOUKI to tap out to his Skull End submission. Again, the action in this one was good, and it did a fine job building up Shingo vs. El Desperado for Sengoku Lord. Obviously Shingo’s knee is going to be a big story going into that title bout, and that story was set up here. ***1/4

Afterward, Shingo appeared to retrieve the NEVER Openweight Title for a brief moment, but then Desperado attacked Shingo from behind and stole the belt back.

While I was watching this match, I decided to cook some chicken tenderloins that I got from the grocery store the other day. For the longest time, I would let the chicken marinate in teriyaki sauce, and just make teriyaki chicken. A couple months ago, however, I discovered a coating mix for chicken that’s just crushed up Ritz crackers. It tastes pretty good, and if you can find it in your local grocery store, I would recommend getting it if you’re looking for something for your chicken.

Why did I just tell you that? Well….because that is far more interesting than this match. Gedo and Yujiro is certainly a nightmarish pairing, but at least it keeps Jado out of the ring. If you just imagine what this match would look like in your head, that’s pretty much how it turned out, with Gedo cheating at every opportunity and Yujiro being very…..meh. To be fair, this was by no means a horrible match or anything. Goto and Okada did what they could, and eventually, Goto put Gedo away with the GTR. This was just a means to build up the Okada/Yujiro singles match at Sengoku Lord. I’m honestly shocked it went over ten minutes! There wasn’t anything of note in the post-match, so this is an easy skip. **1/4

Tenzan came out with Master Wato, so it looks like that relationship will be continuing. As we all know, multi-person tags involving Suzuki-gun typically start out with a brawl, and that’s exactly how this match got going. Golden Aces and Dangerous Tekkers paired off with each other, as did Nagata and Suzuki, who had some really fun exchanges throughout this one. The knee of Tanahashi was once again targeted by the squad from Suzuki-gun for a little bit, and the intensity naturally built from there until they got to the closing stretch. It eventually came down to Master Wato and Kanemaru, which made sense, given what happened at Dominion. Not only did Kanemaru win the match, but he won it quite decisively. He hit the Deep Impact DDT on Wato, and pulled him up from the cover to destroy Wato with a twisting brainbuster. I presume that this little feud between Kanemaru and Wato will continue, but I didn’t expect a finish that was so….definitive. The match itself was a very solid eight-man tag which, in addition to continuing Kanemaru vs. Wato, seemed to tease rematches in the form of Golden Aces vs. Dangerous Tekkers and Nagata vs. Suzuki. ***1/4

In case you missed it, Dick Togo’s Bullet Club nickname is “The Spoiler”, and his new look includes a beret and sunglasses. I have to say, after seeing Dick Togo during his entrance, I would love to see him form a tag team with Bad Luck Fale. Don’t get me wrong, Fale stinks in the ring, but I just want to see those two come out together with their beret, their sunglasses, and some big fat cigars. I don’t know why, but I just think those two would look cool together during an entrance.

Speaking of entrances, it was interesting to see that Hiromu was the prominent LIJ member featured during the team’s entrance. Naito was the second member of the trio to come out, with Hiromu being the last.

Anyway, before the match started, they did a brief tease of Hiromu joining the Bullet Club. As Hiromu took off his jacket, he revealed that he was wearing a Bullet Club T-Shirt. However, this was just a ruse, as it led to LIJ getting the jump on Bullet Club to get the match going. When the dust settled, these two teams managed to have a pretty good main event. It didn’t really stand apart from the other multi-person tags on this particular show, but there was solid action from start to finish. Togo looked fine in his role, and everyone else involved did their usual spots throughout. They built to Hiromu running wild for a bit after a hot tag, but in the end, the Bullet Club team would pick up the win. Ishimori distracted the referee, which allowed Togo to choke BUSHI with the Garrote Wire (I guess that’s going to be his thing). That led to EVIL (who’s gear looked much more streamlined on this show compared to Dominion) connecting with Everything Is EVIL on BUSHI. ***1/4

Afterward, Hiromu went to attack EVIL, but got choked out by Dick Togo’s Garrote Wire. We got the typical post-match promo from EVIL, and he teased hitting the Everything Is EVIL on Hiromu, but decided against it.

This show served as a nice little prelude to Sengoku Lord, in terms of building up the important matches. However, the wrestling itself wasn’t anything special. It’ll probably end up being one of the worst New Japan shows of the year, but that’s not to say the matches were bad. There was one match that was skippable, but it wasn’t a terrible match by any means. You had another bout that was just ok, and the rest were relatively good. If you want to check out a match or two from this card, you’re more than welcome to, but if you’re really pressed for time, you can skip this show. 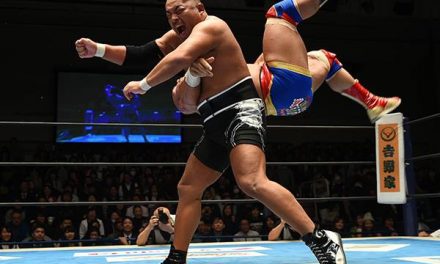 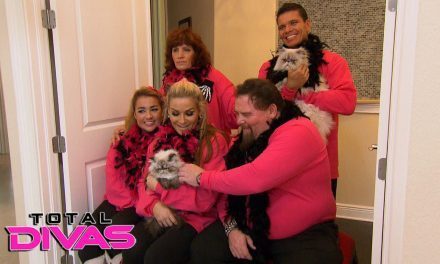