-Three previous Patreon-exclusive full episodes with Alan4L, Rich Kraetsch and Nate from Everything Elite.
-John’s series watching and recapping all of the Kazuchika Okada vs. Hiroshi Tanahashi matches in order, which has been completed! Listen back to all fourteen episodes and follow along this classic series in chronological order, from 2010 through 2019, right now!
-Our next series covering all of the Tetsuya Naito vs. Tomohiro Ishii matches in order, starting this coming week!
-Anime Omakase, our new series exclusively on the world of anime, which has three episodes up and a fourth soon to come.
-Upcoming bonus same-day audio covering Sengoku Lord next week.
-And much more!

This week on Wrestling Omakase we talk some shoot-style NJPW, a couple of awesome BJW matches and a match where puro style meets one dead ass WWE crowd on another Patreon-exclusive episode. If you haven’t listened to a 5 Matches episode yet, every week John and the guest each choose 2 matches to watch and talk about on the episode. Then we each choose a third match, which is put up to a vote on the @wrestleomakase Twitter account (or on the Patreon!), letting the listeners choose our fifth and final match of the week. It’s a fun retro format featuring all sorts of different wrestling!

John is joined by returning guest Robin Reid from the VOW Quiz Night (@TheWrestleQuiz) and ex-host of the Brit Wres Roundtable. Before getting into this week’s 5 Match picks the two talk a number of different topics, but the big one is of course more on the controversial EVIL double title win from Dominion and the ongoing fallout and reactions. Plus, an interesting side discussion on why other promotions, especially AEW, don’t quite get the same reactions and heated discussions out of people. Once that’s out of the way they turn to discussing the match picks, and here they are in order:

Topics that come up along the way include: Nakamura’s history with the white belt (and John turns the tables on the quizmaster!), wrestling transitions fucking rule, knees to the damn face, Hashimoto is a portly badass, Takada’s last stand, Rob has to do battle with the Russian government to bring us this wrestling match, the batshit finish of Sekimoto-Shinobu, John’s 2016 MOTY and does it still stack up for them, Kamitani’s peak (that he’s never been able to reach again), WWE crowds already sucked by 2015, boy is Vince McMahon stupid, and a whole lot more. 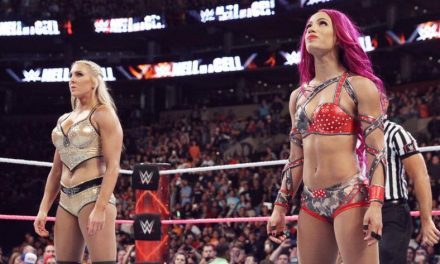 Lucha Of The Hidden Temple: Ultima Lucha Tres Has Begun