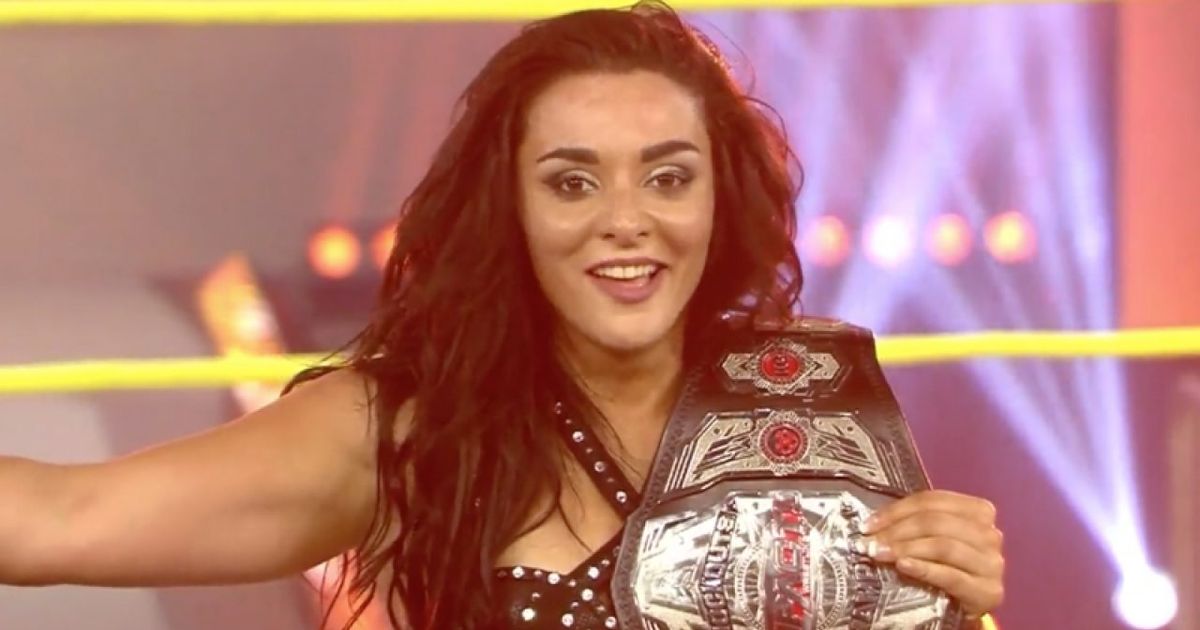 Impact Wrestling promised a number of surprises and big moments for their biggest show of the summer, Slammiversary, and they certainly didn’t disappoint, with the Motor City Machine Guns reforming, the Good Brothers debuting and a new World Champion crowned.

Alex Shelley and Chris Sabin returned to an Impact ring for the first time in eight years to answer the Rascalz open challenge and honestly, how great is it to see them teaming together once again?

After an early feeling out process that allowed MCMG to get up to speed, they helped turn in an exciting start to the show and a performance that suggested they’d never really been away. Initially working a more methodical, veteran heel style, Shelley and Sabin fed off the athleticism of the Rascalz and worked some delightful tandem offense, securing the win with the Dirt Bomb. ***1/4

The Motor City Machine Guns are BACK! #Slammiversary @fakekinkade @SuperChrisSabin

Moose did himself no favors on social media earlier in the week (don’t advertise that you’re mates with a convicted pedophile, it’s a bad look), but aside from this probably going too long, the match was fine and probably slightly above my expectations. Tommy Dreamer’s homage to the ‘Dusty Sucks Eggs’ shirt once sported by Terry Funk was nice and overall the match was exactly what you’d expect, a plodding brawl. Moose demonstrated some improved athleticism here with a couple of impressive moonsaults and after slamming Dreamer’s face into the tacks, he moved to 13-0 in singles matches this year with a spear. **3/4

Time for an unpopular opinion – I didn’t hate this. Ok, it was interminably long and there was far too much laying around but I didn’t think it was the worst match I’ve seen this year. John E. Bravo’s comedy run-ins were a nice pallet cleanser for me, and it helped advance the inevitable feud between Taya and Rosemary. I personally didn’t think they’d pull the trigger on Kylie Rae here but I’m pleased they did, with her hitting a Canadian Destroyer followed by a superkick on Taya to secure the win. **1/4

After the match, we were treated to a Heath Slater promo. Rohit Raju came down to challenge him, with Heath turning him back after connecting with an inverted DDT. A backstage skit later in the show with Rhino and Scott D’Amore suggested that Impact will be working a story similar to the one WWE did when Slater and Rhino won the tag belts. I don’t object to that, as I’m not sure that it’s really possible to present Slater as much more than a midcarder.

To really excel in the pandemic era it’s become clear that you either have to go for a high-paced spotfest or something with a compelling story. Anything in the middle tends to underwhelm because there’s no crowd and sadly I feel this match hit that middle ground. The match was good but because I personally didn’t feel the build indicated a title change, the pinfall was a surprise, and the lack of live crowd meant it didn’t resonate with me as a moment like that probably should have done. I don’t know really, it’s hard for me to articulate, but this was good, engaging but simultaneously a bit underwhelming.

Bey’s slickness was clear for all to see here, as was his development over the last year. For his part, I thought Willie Mack was excellent. He’s a brilliant base for the high-fliers with his power and striking, he looked motivated, and him clobbering Bey with slaps in response to being called ‘Willie Whack’ was a highlight. After kicking out of the stunner, Bey used the referee as a distraction to hit two of his new moves for the win. Overall, as I said, a fun match that perhaps could have done with being a bit longer. ***1/4

While I’m probably the high man here, I thought this was good. The North delivered a strong performance, working that old school style that FTR claim to, and Shamrock & Callihan played their parts well.

After some shootfighting interactions early on between Josh Alexander and Ken Shamrock, The North proceeded to beat down Sami Callihan, setting up the hot tag. The malfunctions between the strange bedfellow team of Callihan and Shamrock were well done but not overplayed and they did a great job of protecting Ken’s big moves like the ankle lock – the simultaneous submission spot with Alexander and him was a nice touch. Shamrock hit an avalanche belly-to-belly on Alexander before then diving to the outside, only to crash and burn as The North got out the way. The Canadians secured another defence of their belts with the double Implant Buster, Page preventing Callihan from breaking things up. ***1/2

Post-match, The Motor City Machine Guns interrupted Page’s promo to announce that they’ll be challenging for the Impact tag titles on Tuesday night. I’m down.

I had high hopes for this one coming in and when the dust settled the ladies duly delivered, putting on the best singles match of the show.

Purrazzo resorted to stalling techniques at the start, which I’ve been critical of in the pandemic era, but they worked here as she soon got into the ascendancy by working over Grace’s left arm. That became her focus throughout, with Grace battling back with her power offense and, in turn, targeting Deonna’s back with a big senton and a nasty looking Bow & Arrow submission around the ringpost. Impact’s presentation of Deonna, as a technical maestro with a decided edge over Grace, has been excellent to date and it was perfect here, with her Fujiwara Armbar desperately avoided like the plague. The finish came after a sequence of reversals, with Grace twice going for a powerbomb, only for it to first get turned into a roll-up and then a double armbar, provoking the verbal submission. ***3/4

Post-match, it was announced that Impact’s next PPV, Bound for Glory, will take place on Saturday October 24.

So the mystery participant for this match ended up being two people, with Rich Swann returning from his injury hiatus to make it four, before Eric Young, now billed as a ‘World Class Maniac’, hit the ring. That took us to five people, as originally planned, and the match was once again contested under elimination rules.

Madman Fulton, Ace Austin’s new heavy, was ejected early on after chokeslamming Eddie Edwards on the apron and after his removal we got a high-paced exchange of moves, with everyone getting some shine and a chance to get their stuff in. Swann looked as crisp as ever on his return, while Young, replete with some new tattoos, also looked great. It was a little slavish to the traditional multi-man formula but it was high energy, which you need more than ever with no fans in attendance. Talking of getting your stuff in, this was WILD.

.@TheTreyMiguel JUST DID A SLIDING CANADIAN DESTROYER TO THE FLOOR! #Slammiversary

Trey, who fulfilled his promise to attack Austin from the off, was the first to get eliminated, getting hit with a piledriver by Young moments after landing a Meteora on Edwards. Young then more or less reduced things to a one-on-one match between him and Swann, powerbombing the former X-Division champion into Austin and Edwards, causing the pair to fall from the top rope through the timekeeper’s table on the outside.

Young taunted and mocked Swann, trying to hit the piledriver before getting caught with a roll-up and eliminated. That reduced us to three, and soon two, as Young attacked Swann’s surgically repaired ankle with a barrage of chair shots. Swann sold it like absolute death (where was Willie Mack??), and despite a few desperate roll-up attempts he was shortly hit with The Fold and eliminated by Austin.

Austin and Edwards, who had a lengthy feud in late 2019, were the last two left and they had a fun back-and-forth in the final few minutes, with the pair kicking out of each other’s finishers. Edwards hit another Boston Knee Party (running Shining Wizard) though and followed it up with an Emerald Flowsion to secure the win and his second run as Impact World Champion. Given the circumstances it was absolutely the right booking call by the promotion, with Edwards as safe a pair of hands as you could hope for, and it completed his lengthy story arc following the Sami Callihan baseball bat shot. ****

Post-match, Austin and Fulton beat down the new champion. They were cut-off by the debut of The Good Brothers, who, after teasing a brief alliance with the Ohio natives, laid them out with a Gun Stun and a Magic Killer. They ended the show standing tall, Talk N’ Shop beers in hand, alongside Edwards.

Then we got a pre-taped video package showing the return of EC3. The boy! He’s home.

Slammiversary was a good show, with a number of fun matches that played to the environment well and delivered as well as they probably could have done. The big arrivals and returns were the key marketing hook for the show and as things stand fans can be very happy – Shelley and Sabin looked as slick as ever and they’ll be a brilliant addition to the tag ranks, The Good Brothers feel like a major act, Eric Young looked good and has a feud out the gate with Rich Swann, EC3 figures to be in the main event scene and Heath Slater will be a strong addition to the midcard with a ready-made story.

In terms of recommended matches, check out the opener and the last three, but overall the show was a breezy watch at just under three hours and put it this way – it was much better than Dominion, and that’s something I never thought I’d be saying after everything that’s happened.