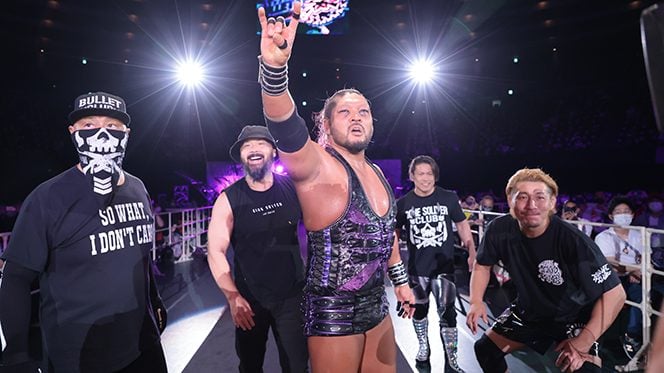 First of all, I am so happy that crowds are back in New Japan. Its a major wrestling show with fans and an atmosphere. It was a little weird a first to only hear the clapping and almost no crowd calls but I am sure it was weird for the people in attendance as well.

The match itself was your usual veterans vs young lions opening tag match. Honma has looked better since returning from break and with the roster a bit depleted at the moment he will likely pick up some more regular bookings. Makabe actually took some bumps, which definitely surprised me.

Tenzan needs to retire and likely will soon enough. While the break seems to have helped him a little bit he still looks like he is in pain every time he moves. Even worse is that he is the anchor that weighs down Kojima who can still got at a high level and could potentially do some fun stuff. The match itself was fine with Goto and Kojima having some fun exchanges. Kidd has progressed significantly during the break and as one of only two gaijin in the Company at the moment really has a unique chance at the moment.

Looking at the gear of both men this is clearly a Dove Pro offer match, it’s just missing the techno music. Once Wato finishes up his career in 20 years after winning the IWGP title 10 times we will look back at this match as the one started it all.

Now all memeing aside the work in this is actually good. Wato has good kicks, which makes sense given the gimmick. There were some sloppy moments but nothing he can’t smooth out as he gets more comfortable with the style. He will fit right in with the rest of the junior division and I am actually looking forward to some of the potential match-ups. He can help breathe some fresh air into the division, especially since that division more than any other is a bit thin right now with guys either moving up to heavyweight or being stuck outside the country.

With that said someone should come out to beat up Wato after every single match he has. Tenzan of all people being the one to come to his save was not something I expected and I am interested to see where this is going. Wato also spents too much time in Mexico shooting his own title angles where he realized too late that he probably shouldn’t have done the title belt motion. Then again he is still the CMLL World Lightweight champion even though he hasn’t defended that title in over a year since he won it.

I was quite surprised by the outcome of this match but it made sense in the context of what happened during and after the main event.

This was a really fun match. Everyone had their working boots on and wanted to give the wrestling starved crowd a good show. The highlight of the match was a beautiful sequence involving ZSJ and Ibushi. This may be a surprise to some people but I think that Ibushi and Zack might be really good at this wrestling thing.

Nagata looks like he got attacked by a giant octopus, as he got cupped yesterday and still had the marks all over his back. I am also not sure if Kanemaru even tagged in. In the post-match, Golden Ace laid out Taichi with a great double team maneuver. They said in an interview that they spent the entire time off coming up with tag team moves. Given that Ibushi is involved you can bet that they came with some crazy stuff. Get hyped for the tag title match tomorrow.

A super fun match with an incredibly high pace. This LIJ combination is my favorite of the whole faction as all three men are in my New Japan top ten. Their styles just mesh together very well and they have some fun character dynamics on top of it. If LIJ continues to splinter going forward I hope that these three will stay together. Maybe have YOH join when he comes back from injury next year and you have refreshed the faction enough to keep them going for another five years at least.

BULLET CLUB is EVIL! New Japan Cup is EVIL! Everything is EVIL!

With most of the Bullet Club stuck outside of Japan for the foreseeable future, this turn makes a lot of sense. Factions in New Japan have become quite stale and it has been a while since we’ve seen a major jump like this. We will see tomorrow if EVIL keeps the gimmick and just adapts it to Bullet Club or if he gets a full repackage now.

The match itself was good but not great. I liked Okada here a lot more than I have during his other tournament matches but the Cobra Clutch still doesn’t look great. But Okada with a crowd is much better than Okada with no crowd. He was noticeably more motivated and he needs to feed off of the crowd’s reaction. They also couldn’t help but do crowd calls for him. The work was straightforward with Evil trying to break Okada’s neck early on and slowly but surely escalating his cheating antics as the match went on.

I was not a fan of the Gedo and Yujiro interference but given the post-match it makes sense. EVIL also didn’t win off of it, which would have really left a bitter taste in my mouth. He nevertheless kicked Okada in the dick and then pinned him with the EVIL for the biggest win of his career. Then he turned on his friend Naito in the post-match and joined Bullet Club. Do I think he has a chance to win? Well, you have to read my Dominion preview to find out.

A rock-solid show from New Japan made better by the return of fans. There weren’t any blow away matches but there weren’t any outright stinkers either. This really was just a show to set up things for Dominion tomorrow and I have hopes for that show to deliver at a higher level. 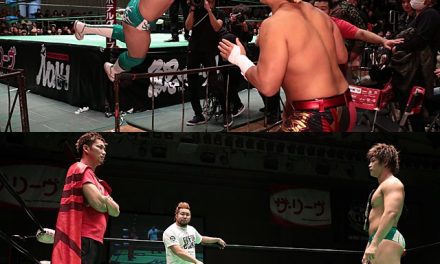 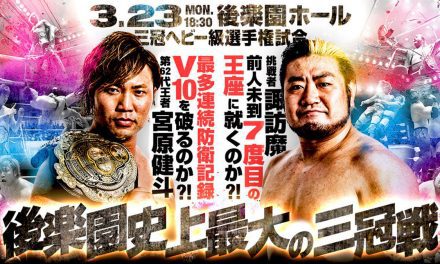