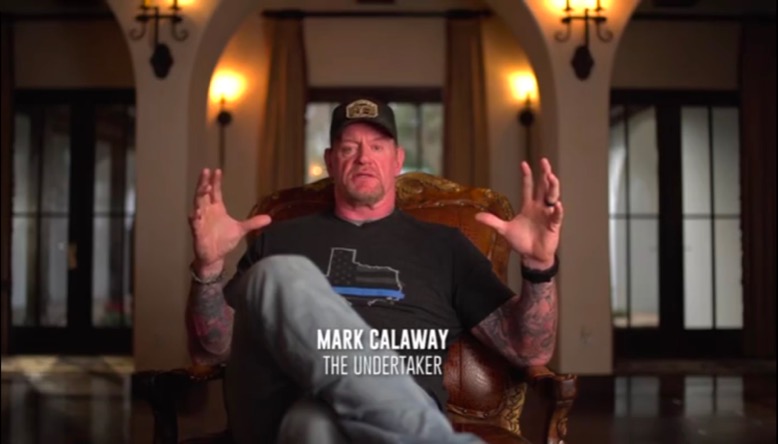 The Undertaker was my first favorite wrestler. That should come as no big surprise to the people who know me since I’ve told them that in various conversations over the years. I even wrote an article almost five years ago praising his undead ass for a little over a thousand words. As I reread the piece for the first time in god knows how long, my eyes fixated on a few particular passages. Here’s the first:

That said, I’ve never been turned off by Taker himself. I may like some of his iterations more than others, but I’ve never gotten sick of him. “Go away” is not something I’ve thought in regards to The Undertaker and I don’t think I ever will.

It’s amazing how much can change in only a few years. Since the publishing of that article on November 26, 2015, there have been instances where I wished The Undertaker had indeed gone away. I shake my head in remembrance of Taker’s sloppy performance against Roman Reigns at WrestleMania 33, the unmitigated disaster that was the Brothers of Destruction vs. D-Generation X match at Crown Jewel 2018, and the match against Goldberg at Super ShowDown 2019 that injured Goldberg and would have crippled The Undertaker if a botched Jackhammer had landed on the wrong side of the coin.

I can’t say that seeing The Undertaker have these poor matches made me “sick of him,” so to speak, but it did make me feel sad. Here was my first favorite wrestler, the guy I thought was a totally cool badass since the first time I ever saw him in 2003, now an old man hobbling around the ring with the rest of the 50-year-olds because they’re the only stars Vince has left on the roster. I understand that seeing the heroes and icons of your youth succumb to old age is just a natural part of life, but it doesn’t make it any easier. The other day I discovered Ben Stiller’s hair had gone completely white and it nearly bowled me over; it’d been a longer time since Heavyweights than I had realized.

This brings me to the other passage from my previous article that I couldn’t help but focus on:

Of course, the time will soon come for The Undertaker to go away. Take away the look, the entrance, and everything else, and what are you left with? Mark Calaway, a 50-year-old man from Austin, Texas with a wife and kids.

Eventually he will decide to call it a career and make that slow walk back up the entranceway, ready to raise his fist in the air one final time. No one can do this forever; there’s always a faster gun.

After losing to Reigns at WrestleMania 33, there was the impression that it was Taker’s final match. He symbolically laid his gloves, hat, and coat in the center of the ring, then went over to his wife Michelle McCool in the front row and kissed her. Then he limped back up the entrance ramp, raised his fist up in the air, and descended down into the smokey depths of Camping World Stadium. Even though the match against Roman was a less than stellar one to go out on, the aftermath seemed to say that that didn’t matter. This was the end for The Undertaker.

Taker came back at the following year’s WrestleMania in New Orleans to wrestle John Cena, then kept making sporadic appearances thereafter (mostly on major foreign shows like in Saudi Arabia or Australia). His career continuing well into his fifties, it left people wondering how much longer this was going to go. What would be the match where The Undertaker would finally stop being “The Undertaker” and become Mark Calaway, a middle-aged family man from Texas.

As it turns out, it wouldn’t be a match; it would be a documentary series. Undertaker: The Last Ride (which I’m sure was in no way based on the highly popular Michael Jordan documentary series The Last Dance) chronicles the past three years of Taker’s career, beginning with the Roman Reigns match at WrestleMania 33 and ending with the Boneyard match against AJ Styles at this year’s WrestleMania 36. Camera crews document Taker preparing for the various matches, hanging out with his family and friends backstage at events or at home, dealing with his numerous physical issues, and sharing his feelings about his life and career during sit-down interviews that are interspersed throughout the series.

I watched all five episodes and I can’t look at it as anything other than the true end of The Undertaker character. The mystique and intrigue that surrounded this man for thirty years is now well and truly gone. The erosion of that mystique started when Taker became the American Badass in 2000 and slipped in more of his personal life into his gimmick. There’s also a short documentary from 2002 called Undertaker: This Is My Yard that is sort of a precursor to The Last Ride. Then there’s the fact that nowadays “The Deadman” is on Twitter and Instagram. And who could forget the time when Taker dressed up in full costume outside the Cleveland Cavaliers’ locker room in an attempt to get a photo op with LeBron James, only for LeBron to completely ignore him. (That last one really hurt to see, I’m not gonna lie.)

If all those moments were chipping away at the stone, The Last Ride took a sledgehammer and smashed the whole thing to pieces. This was not The Undertaker we were watching, it was Mark Calaway. Who is Mark Calaway? He’s a loving husband and father. He’s respected and revered by all of his peers to the point of godliness. He enjoys fishing, playing cards with his trainer, doing bad Marlon Brando impressions, and saying “Kobe!” when throwing something in the trash. He also owns a lot of apparel that would make your liberal family members give him the side-eye if you brought him over for Sunday dinner.

He is also a man struggling with the finality of his career. The crux of the documentary is Calaway’s search for the storybook ending, the classic match that he can proudly call his last and then ride off into the sunset. The Roman Reigns match was supposed to be it, but after rewatching it at home several months later, Calaway decides that it can’t be it because he was disappointed with his performance. So he comes back for the match against Cena, and even though everything goes fine, the match was only three minutes long, and he’ll be damned if The Undertaker’s last match was only three minutes long. So Calaway keeps coming back for more in what McCool calls “a vicious cycle.” There are other elements that fuel his desire to keep going—namely his undying (no pun intended) loyalty to Vince McMahon—but it’s his quest to find the right ending that ultimately drives this train.

There were times watching the series where I found myself annoyed with Calaway. I wanted to jump through the screen and tell him that there are scores of legendary wrestlers like himself who never got the storybook ending. The ones who did typically ended up right back in the game, whether for money, boredom, or otherwise. Calaway praised Shawn Michaels for getting the pitch-perfect final chapter and managing to stay away ever since, but what happened? A little bit of Saudi blood money and Shawn moonwalked onto that plane to Riyadh toot sweet. The same goes for Ric Flair, Terry Funk and countless others.

“One of my biggest fears is kinda becoming a parody of myself,” Calaway says early on in episode one.

“Too late,” replies the little voice in the back of my head.

While I found myself annoyed at Calaway, I also tried to see things from his perspective. He’s a guy facing his own mortality. He spent 30 years being The Undertaker and now that time is coming to an end. And when you’re a performer like him who reaches that top-level in your chosen industry, you want to go out with a bang, not a whimper. You want a final performance that people will remember fondly for the rest of their lives. Elton John didn’t announce his retirement from touring a few years ago with a simple note and a wave goodbye, he announced one final massive worldwide tour with all the bells and whistles. In Calaway’s mind, The Undertaker needs that legendary ending that feels satisfying both from a physicality standpoint and an emotional one. Looking at it from that side of things, I can understand where he’s coming from.

At the end of the final episode, Calaway drops the bombshell by announcing his retirement from wrestling… sort of:

If there was ever a perfect end to a career, [the Boneyard match] was it. If Vince was in a pinch, would I come back? I guess time will only tell there. In case of emergency, break glass, you pull out The Undertaker. I mean I would have to consider that. Never say never, but at this point in my life and in my career, I have no desire to get back in the ring. […] I’m at a point… this time the cowboy really rides away. There’s nothing left for me to conquer, there’s nothing left for me to accomplish.

When the finale aired, I wasn’t watching live, so I was a bit confused as to why #ThankYouTaker was trending on Twitter. Come to find out it was because of his little announcement. It seemed strange to me that a story of this magnitude–The Undertaker’s retirement–wasn’t getting as much attention as I expected on my social media feed. Then again, this was during the perfect storm of Black Lives Matter, COVID-19, and #SpeakingOut, real-life issues that would put any wrestler’s retirement on the back burner. And we all have our own bubbles when it comes to social media too; mine just happens to not really care for The Undertaker all that much.

And besides, any attention that Taker’s retirement did get on my feed was dripping with skepticism. Oh, you’re retiring? See you at Mania next year. Honestly, who can blame them? We just watched a five-part documentary about a guy struggling with the concept of closure. We saw the pain etched on his face as he had to sit backstage at WrestleMania 35 in New York instead of being able to wrestle in front of all those fans. We know all about his loyalty to Vince (“If he thinks Vince needs him, he’s in,” as Michelle McCool puts it) and he even references that loyalty in his retirement statement. And of course, there are those three (well, technically two) magic words that are part of every retiring wrestler’s lexicon: Never say never.

So never say never when it comes to The Undertaker. For all I know, he truly is satisfied with finishing his career with the Boneyard match. But part of me thinks that when WrestleMania 37 rolls around next year and SoFi Stadium is (hopefully) packed to the gills with fans, a gong will sound. The lights in the stadium will go dark. The roar of the crowd will rise as smoke fills the stage area. And out of the shadows will appear a tall, ominous figure wearing a black hat, black gloves, and a black duster.

But it won’t be The Undertaker who makes his way to the ring. It will be Mark Calaway, a man still searching for an ending worthy of his story. 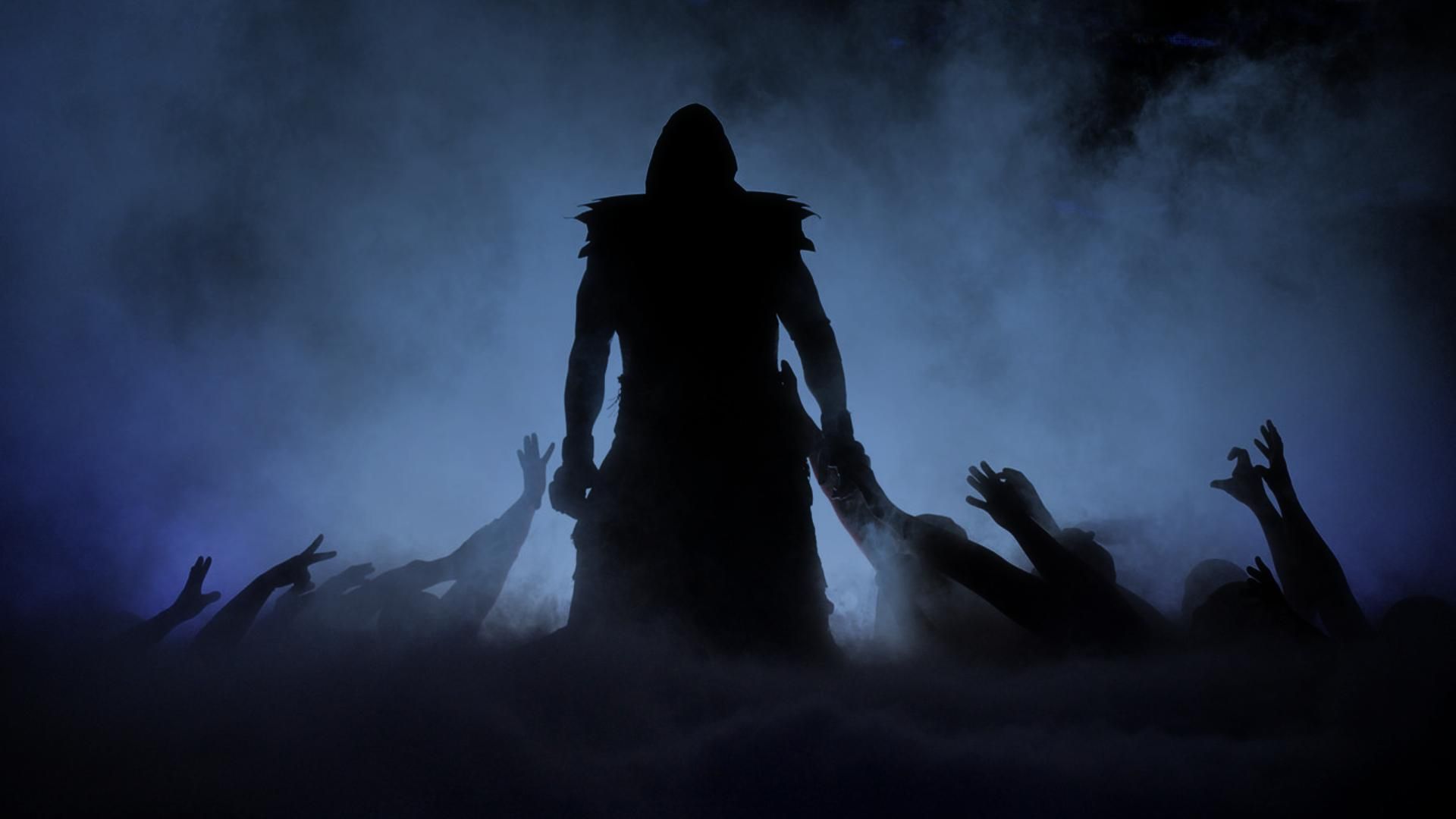