Suffering Becomes Beautiful: Mayu Iwatani and the Art of Vulnerability 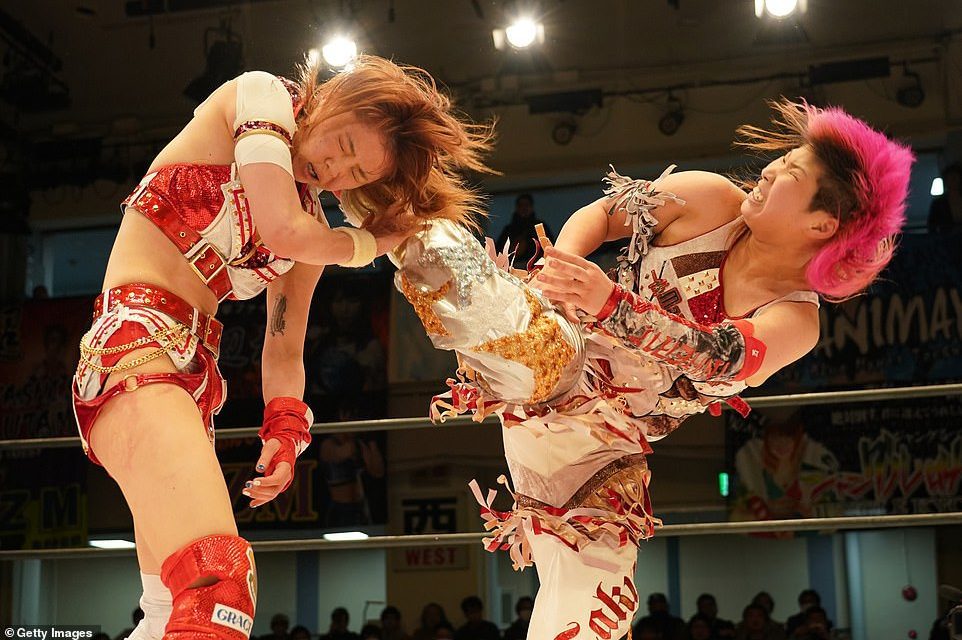 In one of the most memorable scenes in the Martin Scorsese-directed 2006 film The Departed, crime boss Frank Costello (Jack Nicholson) pins Billy Costigan’s (Leonardo DiCaprio) left wrist against a pool table. The frayed bits of Costigan’s cast lay spread on the green felt like a plucked chicken. Costello interrogates this potential new member of his crew by clobbering his already broken hand with a hiking boot.

Much of the scene’s power comes from DiCaprio’s ability to relay his character’s suffering. With every blow to his fractured bones, Costigan curses, screams, grunts, and squirms until he is red-faced and out of breath. DiCaprio uses every physical tool he has on hand, adeptly and wholeheartedly, until his pain simply burns onscreen.

Mayu Iwatani, World Wonder Ring Stardom’s top champion, has that same ability. From her facial expressions to crumpling her body, she is able to make everything she endures in a wrestling ring believable and powerful.

Put it in its simplest terms, pro wrestling is about causing and receiving pain, and making the audience care about both. Iwatani is a virtuoso at the receiving side of things. Her suffering in the ring is so convincing, it’s hard at times not to be concerned for her, as we are left unsure where the theatrics end and the need to seek medical attention begins.

It helps too that Iwatani is so likable, that she often emits a childlike joy.

Her pre-match ritual sees her spin amid the fluttering streamers, grinning, her arms stretched out. At that moment, she is a kid playing in falling snow.

In her interviews, she is shy and unassuming. She is a 110-pound woman with a rabbit-soft voice. She often giggles when she delivers her catchphrase in English: “Check it out!”  You don’t want to see someone like this get hurt.

But she does. Often and dramatically.

Iwatani sells her opponent’s offense as if it’s torture. She commits to every kick to the chest, every suplex, every crash on the mat with her whole body, her whole being.

English wrestler Cara Noir effectively explained the power of selling your opponent’s offense in for one of his training workshops. “Selling is way more than making a move look painful,” he wrote. “It’s giving the audience an opportunity to live vicariously through your pain. But more importantly for the audience—watching the humanity of a wrestler overcoming adversity against all the odds, is akin to the high drama of Greek tragedy.”

At only 27 years old, Iwatani is already a master of that. She is one of the best sellers in wrestling today. When she is in peril mid-bout, it feels as if she is Prometheus getting his liver eaten by the eagle over and over again.

To explore Iwatani’s artistry in anguish, Stardom’s 9th-anniversary show is a smart place to start. That night in Korakuen Hall, she took on Momo Watanabe in a World of Stardom Championship defense. Watanabe, a skilled seller herself, thrives when on the hunt.

She and Iwatani have long clicked together, and the two Stardom MVPs produced once more in the spotlight.

Before the bout, Iwatani smiled and waved at the fans like she was a teen in a chorus recital saying hi to her parents. Little moments of innocence like this are part of her charm.

Watanabe worked over her arm for much of the bout. That created a space for Iwatani to work her misery magic.

A stomp on her arm left Iwatani flailing like a fish thrown on the deck of a boat. Caught in an armbar, she let out a primal scream. One German Suplex left Iwatani’s body stiff. Her right arm stuck out to the side. Her dazed eyes stared off to God knows where. It was as if the suplex had expelled her soul from her body.

In the grip of Watanabe’s series of submissions, Iwatani displayed her pain via her face, her body, her voice. It’s hard not to see that dramatic reaction to her lanky limbs being pulled back and wonder if her joints might rip right in front of us.

Iwatani was able to fend off her challenger, frustrating the former champion in an excellent main event. The path to that final Dragon Suplex and the subsequent celebration was elevated by all the torment created along the way.

In one of the best matches of 2020 so far, Iwatani battled Takumi Iroha at Stardom’s The Way to Major League event on February 8. Sareee was supposed to be her opponent that night, a special guest from outside of Stardom. Sareee, though, was ill which left the door open for Iroha of Marvelous to challenge instead.

What a perfect matchup this turned out to be.

Iroha has three inches and over 40 pounds on Iwatani. She’s a bruiser who kicks like a pissed-off mule. She proved to be the ideal vehicle to showcase Iwatani’s vulnerability, the Costello to Iwatani’s Costigan.

When Iroha laid some of her famous kicks to Iwatani’s gut, The Icon of Stardom left her feet, her face pained.

The outsider flung Iwatani around. She laced her with chest stomps. She turned her into a desperate woman having to muster every bit of guts she had.

At one point, a homerun of a punch sent Iwatani backward, eyes closed, lifeless. The dramatic reaction is a perfect example of her commitment to the craft of selling.

No wrestler in the world is as devoted to selling complete and utter death as Mayu Iwatani is. pic.twitter.com/G2gJ8a4cNt

The hurt Iwatani suffered, coupled with the resilience she showed in spite of it, helped make this a work of high drama.

Iwatani and the rest of the Stardom roster had the challenge of eliciting emotion minus a crowd at the No People Gate show on March 8. Not surprisingly, she was more than up to the task.

She wrestled Saki Kashima, her once tag team partner who betrayed her, in a Lumberjack match.

The extra figures in this drama gave Iwatani added opportunities to suffer and suck us in. The members of Oedo Tai thrashed her at ringside at every opportunity. They wrapped her in the ring apron and walloped her with an umbrella. Before Iwatani’s STARS stablemates could save her, she took the blows, yelping, rolling to get free, wearing her agony on her face.

The lack of crowd amplified the sounds of violence. Kashima’s thigh kicks echoed in Korakuen Hall. Iwatani’s screams traveled further than normal. It all served to magnify the physicality between the former friends.

Of course, Kashima did more than kick Iwatani’s leg; she wrenched it and ripped at it. And Iwatani sold the hell out of every bit of it.

As the match moved from the ring to the empty stands, Iwatani’s commitment to making us care for well-being was on full display. Kashima sent the champion rolling down the arena steps. Iwatani curled her body and slowly descended, flesh hitting cement over and over until she collided with a row of chairs.

While some wrestlers forget to sell the limb that’s been punished all night once it’s time to go on the offensive, Iwatani still suffered in the aftermath of everything Kashima and Oedo Tai threw at her.

She wobbled on her bad leg. She looked punch-drunk, weakened, worse for wear as she took control en route to victory.

These performances this year are reminders that Iwatani is elite at this skill. As much emotion as she can generate from being on the wrong end of a beatdown, we should be putting her name in the same category as the all-time greats in that arena—Ricky Morton, Manami Toyota, Bret Hart, etc.

In 2015, Golden Globe-winning actor Annette Bening spoke at Chapman University about the art of vulnerability. “It’s that softness, that humanness that when somebody watches us. ‘Oh, that’s me,’” she explained. “You want to bring people into you.”

It’s unlikely Bening had Iwatani in mind when she said that, but that’s a perfect description of what the Stardom ace is able to do in every match—bring people into her. You hear, see, and feel Iwatani’s pain as she battles.

It’s a pain that resonates, a beautiful and spellbinding poem recited between the ropes.