–Two Patreon-exclusive full episodes from June with Alan4L and Rich Kraetsch.
-John’s series watching and recapping all of the Kazuchika Okada vs. Hiroshi Tanahashi matches in order, which has ten episodes already up and ready for you to listen with four more still to come in July.
-Anime Omakase, our new series exclusively on the world of anime, which has two episodes up and more to come.
-Bonus audio with John and VOW contributor Tyler Forness giving their 2020 New Japan Cup picks, filling out their brackets live on the air, in case you want to hear how wrong we were in hindsight.
-And much more to come!

This week on Wrestling Omakase we discuss the physical declines of some major NJPW wrestlers (and who’s held up better than others) and a whole lot more. If you haven’t listened to a 5 Matches episode yet, every week John and the guest each choose 2 matches to watch and talk about on the episode. Then we each choose a third match, which is put up to a vote on the @wrestleomakase Twitter account (or on the Patreon!), letting the listeners choose our fifth and final match of the week. It’s a fun retro format featuring all sorts of different wrestling!

John is joined by returning guest Nate (@epitasis) from the VOW network podcast Everything Elite (@EverythingAEW). They start things off with some talk about what they’ve been up to lately and trying to avoid doomscrolling, plus what passes for American optimism here on this oh-so-wonderful 4th of July. Once that’s out of the way they get into their five match picks, and here they are in order:

Topics that come up along the way include: Nate’s first full New Japan show, yet more Stardust Genius defense, Nate reevaluates Shinsuke, possibly the biggest gap in opinion on a match we’ve ever had on this show, why Naito is holding up so much better than Nakamura as a wrestler even while both have obviously slowed down physically a bit, nobody got a bigger raw deal than ACH, John really hates American crowds (part 1), Public Enemy returns to WCW, The Sandman gets fired from WCW, everyone gets injured and the cameras miss virtually all of it, IMDB goofs, John really hates American crowds (part 2), Nate does his best to defend this Elite drama stuff, and John of course buries it.

Open the Voice Gate #33: The Gathering of Fujii-los 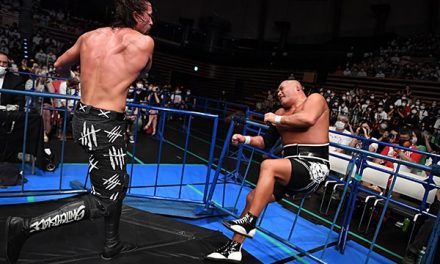 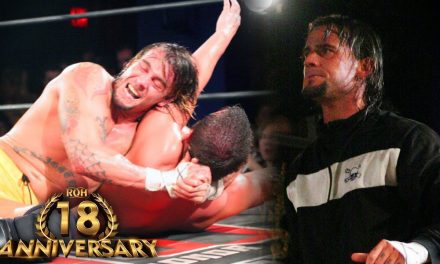