This week on Wrestling Omakase we’ve got our first-ever all-NJPW 5 Matches edition, talking Naito-Omega II, Ishii-Shibata from the G1 and much more! If you haven’t listened to a 5 Matches episode yet, every week John and the guest each choose 2 matches to watch and talk about on the episode. Then we each choose a third match, which is put up to a vote on the @wrestleomakase Twitter account (or on the Patreon!), letting the listeners choose our fifth and final match of the week. It’s a fun retro format featuring all sorts of different wrestling!

Wrestling Omakase now has a Patreon. Head to http://patreon.com/wrestlingomakase where you can listen now to two exclusive 5 Matches episode with VOW flagship co-host Rich Kraetsch and Alan4L from the PWTorch, plus 9 episodes in our ongoing series covering every Okada-Tanahashi match in order, 2 episodes of Anime Omakase, and our New Japan Cup pick ’em. Coming up in July will be 2 more exclusive full-length 5 Matches episodes of Omakase (while the Omakase free feed transitions back to covering more current wrestling), another set of episodes covering an entire match series in order (and you’ll be able to vote on which one!) and much more. You can get access to all of our bonus audio for just $5 a month!

John is joined by debuting guest Sylvi (@sylvisurfer) from the podcasts Friends at the Table (@friends_table) and Emoji Drome (@emojidrone). Before getting into their picks John and Sylvi go off on an extreme Gundam tangent based on Sylvi’s recent appearance on another Patreon, discussing some reasons why Gundam Wing isn’t popular with certain types of fans and more. Then they get into this week’s matches, which include:

Topics that come up along the way include: the greatest start to a wrestling match in history, how Sylvi escaped the horrors of WWE fandom, John forgot their own pick, The Shin Nihon Shawn Michaels, it’s a good thing Naito and Kenny are on separate continents now because they were probably going to kill each other, Ryusuke Taguchi’s bony ass, Hiromu’s original rampage, the tragedy of Hirooki Goto, John brags about being in the building for Naito wins again, when the Laughter7 ends, and gross ankle sock tossing.

Missed any of the 5 Matches episodes or just want to revisit one of the matches discussed previously but aren’t sure what episode it took place on? Here’s a handy Google Doc with links to every single match we’ve discussed on this series so far, which will continue to be updated with every episode. 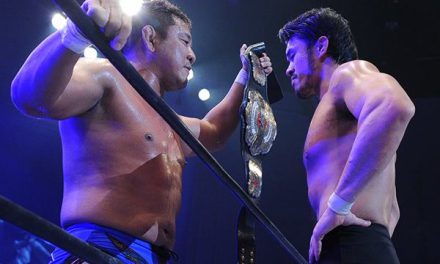