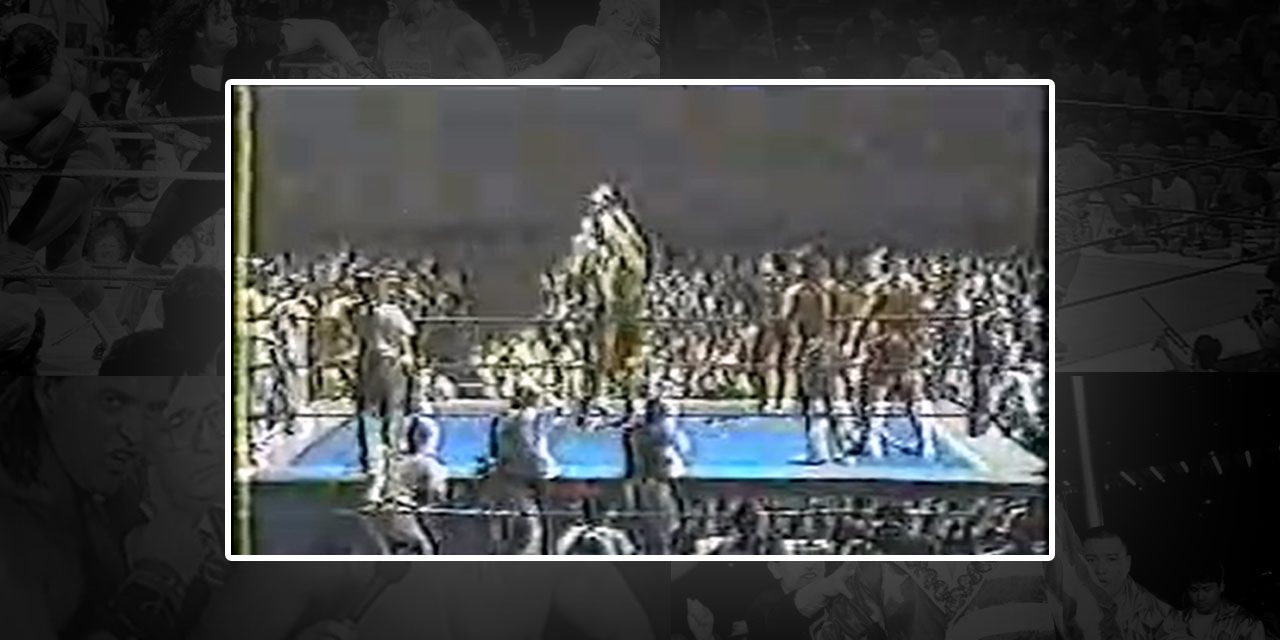 The collection of matches and segments I am watching for this series come from a 1992 Yearbook created by Goodhelmet, a longtime poster at the Death Valley Driver Forum and other wrestling places. A cross-section of the best (and worst of wrestling within a certain year), it is a great snapshot of everything of importance. The footage is taken from June 21-26.

On the June 21, All Japan Women played host to a ridiculously stacked – on paper – card, with the first of three contests from the show pitching Aja Kong against Bison Kimura. The tone was set immediately by Kimura slapping Kong, causing an exchange of slaps, punches and kicks that were never anything but stiff in nature. Kimura was soon bleeding after a Kong headbutt caught her above the eyebrow, leading to an extended beatdown that included a crowd brawl that had fans running for cover and multiple piledrivers. When Kimura did finally gain control, she returned the favor by taking the match back into the crowd and blasting her opponent with several more chairshots of her own. In both altercations at ringside, referees and commentators also got caught up in the chairswinging violence.

The pace, perhaps unsurprisingly, couldn’t always be maintained so there are moments where things did somewhat grind to a halt, yet when the match returned to the ring, things picked up once more. Some of the later spots, such as a missed Kong shoulderblock, played into their past as team mates in some simple, but effective, narrative work. By the end, Kimura’s face was a mess – a tooth had also been knocked out – but she managed to kick out of the Uraken spinning back fist. However, it didn’t save her for long as a chokeslam and an arm submission ended the contest shortly afterward. Brutal, entertaining, if a little bit stilted at times.

At the same show, the always awesomely attired duo of Bull Nakano and Akira Hokuto met Kyoko and Takako Inoue. Rather than brawling and chairshots, this was more of the fast-paced, big move joshi that I feel like I’ve seen a lot more of during this set. That isn’t to say there wasn’t some hard-hitting action, especially when Nakano drilled Takako with a vicious clothesline for her first move of the match. It is the impact of a lot of the moves that was eye-opening – Hokuto spiked Kyoko into the mat with a stuffed piledriver variation in the opening exchange, before dumping Takako with a back suplex that planted her on her head a few minutes later

There was a pleasing mix of arrogance and violence. Nakano and Hokuto isolated Takako, who became the ‘weaker link’ of her team as Kyoko’s frenetic offense did briefly afford her team some success, yet they were almost always fighting from underneath. This made moves such as Kyoko hitting a spinning powerbomb variation on Nakano all the more important when they landed. Nakano, for me, was the star of this match as she absolutely bludgeoned both opponents throughout the contest in a no-nonsense fashion that I adored. The Inoue duo weathered the storm enough to hang in, but a Northern Lights Bomb by Hokuto on Kyoko was followed by a top rope legdrop from Nakano for the win. A good match, though perhaps a little more lop-sided than I expected.

The final contest from the show saw Manami Toyota versus Toshiyo Yamada. I don’t think I’ve seen Yamada in action before so she is a new one for me and she was immediately under pressure as Toyota burst out of the gate looking for a quick victory. As things settled down, it was Yamada who took control, utilising submissions to wear down her opponent for more prolonged periods of time than either of the previous contests. Indeed, Toyota also turned to submissions, even holding a leglock as Yamada reached the ropes in a rare example (for me) of Toyota ‘cheating’.

The pace often noticeably lifted when Manami took over on offense, whilst both women’s kick based offense didn’t mess around (Toyota clocked Yamada with a second rope dropkick to the face; an enziguri that looked like it hit hard was her revenge moments later). In a wild spot, Toyota missed a dive and took out another female wrestler who was at ringside as both wrestlers began to throw bombs: top rope belly to belly (Yamada), lionsault, top rope moonsault (Toyota). Coming off the worse for these exchanges, Yamada tried to take the match back to the canvas with some success, punctuating this offense with vicious kicks.

There was a raft of nearfalls as the match approached its conclusion, a chance primarily for Toyota to show off her dazzling array of suplex variations. She was incredibly lucky not to get hurt after a top rope moonsault to the outside saw her come up short, yet Yamada was able to largely cushion the blow. It appeared as if Toyota was going to grab the victory as she unloaded with several more throws, but Yamada managed to land a reverse Gory bomb into a pin for the victory. A strong outing for both wrestlers and a pleasantly surprising victor (I assumed Toyota would win, just because I guess).

Moving on to a Pro Wrestling Fujiwara Gym offering afforded me another chance to see Yoshiaki Fujiwara taking on Bart Vale, the man who had beaten him in Los Angeles earlier in the year. This match took place in Japan, putting Fujiwara on home turf for this rematch of a contest that I enjoyed, even though it isn’t my usual fare. It had been a while since I watched that first match so I’m going largely from memory, but this felt a more tentative encounter. It was Fujiwara who first managed to strike significantly, dropping Vale to the canvas for a nine-count, as well as forcing Vale into the ropes a number of times. Vale had more success in the second half of the contest as he put Fujiwara under pressure on the mat and connected with several kicks. Then, somewhat out of nowhere, Vale took the win after choking Fujiwara out. Some interesting moments, yet this just wasn’t really for me and I don’t feel the most adequately knowledgeable to do this justice in terms of the analysis.

After starting with an All Japan Women trio, we end with three matches from the 26th June Masters of Wrestling New Japan card. I’m excited immediately by the prospect of another Jushin Liger versus El Samurai match as Samurai challenged for the IWGP Junior Heavyweight Championship. The feud between these men had escalated and Liger’s frustrations were evident when he blasted Samurai with a koppou kick after a handshake was refused. With Samurai the de facto heel, it left him in the odd position of fighting from underneath to begin with as it was sold as if it had legitimately knocked him out for a brief moment. I always love me some aggressive Liger and he worked the arm relentlessly in the early moments, whilst it was Samurai who first took to the sky with two dives to the outside to establish control.

It wasn’t long before Liger was also launching himself out of the ring as both men came across as very evenly matched. A neat moment saw Samurai release a bridging German suplex at one in order to use a more effective Dragons suplex for a nearfall, before he then kicked out of two powerbomb variations, including a Ligerbomb. I loved the finish as Samurai slid through Liger’s legs and took him down into a pin for the three – mainly because I loved that he out-thought Liger to get the win, even as the ‘heel’ of the match. It could have been better for his win to be more decisive, but it keeps Liger strong whilst showing what Samurai was able to overcome and still win the gold. A good match that is worth checking out.

The next contest saw Hiroshi Hase take on Kensuke Sasaki as former partners collided with Sasaki trying to prove how capable he was to his mentor. Though Sasaki was the bigger man, little things such as Hase blowing off a stomp to the head to give Sasaki several slaps helped to establish the big brother/little brother vibe. Sasaki’s elbowdrops and sleeperhold wore down Hase as he dominated to begin with, even dragging Hase back into the ring to re-apply the sleeper. This was no friendly as Hase busted Sasaki open with a succession of headbutts, giving the big guy a further element of adversity to overcome.

Sasaki’s sleepers do turn into chokes as the match progressed, whilst the contest as a whole is stiff and disjointed, though it felt like that was the whole point really. It sold the hate, before Hase fired up and dropped Sasaki with multiple uranage suplexes. This turned into a bit of an obliteration to finish as Hase dropped him with a Northern Lights Suplex for the win, firmly establishing Hase as the superior of the two. However, Sasaki was able to leave the ring on his own in a showcase of just how tough he was. Hard-hitting and heated.

The final match was an IWGP Tag Team Championship contest as The Steiners challenged Bam Bam Bigelow and Big Van Vader. There are few matches that could have me as excited as you know, based on their work this year alone, that these two teams just throw bombs from bell to bell. Within the opening minutes, a Bigelow enziguri clobbered Scott, before the Steiners hit top rope clotheslines to their unsuspecting opponents. However, there was somewhat of a more deliberate pacing between all four, whilst neither team really controlled things for too long as parity was firmly established, at least until Rick started chucking Vader around, earning him a standing ovation from the crowd.

Things did settle down to more what might have been expected as the champions isolated Scott with their power offense. An odd spot saw Vader land a powerbomb on Scott for two, yet Vader immediately looked over to Rick in the corner, as if he had expected someone to halt the count. I might be wrong though as Rick also kicked out a powerbomb later on, one that came about after Bigelow halted the hot tag with a stun gun. After a good contest, the finish was a little weak as a slam attempt by Bigelow saw a collision with the referee. Remonstrations with the ref saw Bigelow turn around into a belly to belly suplex and we have new IWGP Tag Team Champions. Probably not as good as some of the other matches involving these two teams, but has its moments.

This was a great selection of matches, which makes it even more annoying that the bulk of them aren’t available. All of the action from All Japan Women and New Japan were worth checking out, whilst the PWFG contest was fine for what it was. Check back next week as I continue to head through 1992 in That Was The Year That Was.