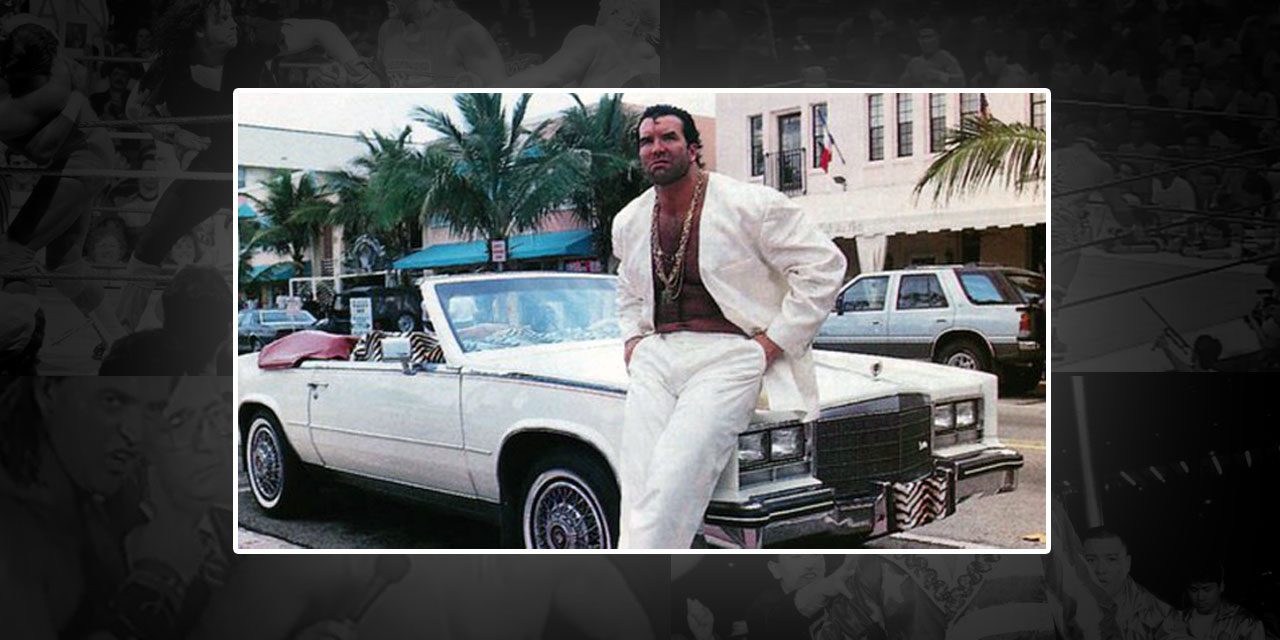 The collection of matches and segments I am watching for this series come from a 1992 Yearbook created by Goodhelmet, a longtime poster at the Death Valley Driver Forum and other wrestling places. A cross-section of the best (and worst of wrestling within a certain year), it is a great snapshot of everything of importance. The footage is taken from the June 20.

After a brief break, I am back to continue my meander through the action across the wrestling world in 1992. With all of the action taken from the June 20, we are almost exactly halfway through what has been a largely exciting year. Let’s see if the various promotions can keep offering up great in-ring action.

WWF Superstars is the first stopping point this week as Shawn Michaels and Sherri Martel joined Mean Gene Okerlund for an interview. This introduced the concept of Sherri wandering around with a mirror to show off how good looking Michaels apparently was. Considering the Rockers weren’t often given a chance to talk during their run, Michaels does feel like he hits the ground running. Sure, it is fairly straightforward character work as he plays the arrogant heel, but he does a decent job of it. Michaels can see the next Intercontinental Champion as he looked in the mirror, before laughing off any concerns about any upcoming match with Bret Hart. I don’t know how long it lasted, but they are still running with a ‘Shawn Michaels has left the building’ element to the character, something which I really don’t remember.

Not a lot from Superstars in general as the next segment was another Razor Ramon vignette as he rocked up in a Cadillac. Again, standard heel fare really as no-one is going to tell Ramon what to do. Maybe it is just me, but it felt like the accent was a little bit more toned down than the one he used in his actual debut vignette (you can ignore the title of the Youtube video).

Over to Memphis where the whole worked shoot environment of recent weeks continued. An interview with Dennis Coralluzzo was due to air, yet Jerry Lawler joined Dave Brown to contextualise their relationship. Coralluzzo had claimed that Lawler caused the death of Andy Kaufman, as well as recently launched a paternity suit for two men who claimed they were Lawler’s illegitimate sons. In the interview, Coralluzzo warned he was coming to Memphis with the sons and a wrestler who promised to end Lawler’s career. Rather than wait for next week, Coralluzzo then interrupted Lawler to introduce his new man, Mike Doggendorf. Doggendorf is physically imposing but channels Christian Bale as Batman in his efforts to sound scary.  The brawl the followed emptied the locker rooms in a cool visual, but this just felt low end Lawler, especially after the back and forth with Eddie Gilbert in recent weeks.

Things don’t get much better as Coralluzzo comes out later on in the show to introduce Lawler’s ‘illegitimate sons’. In a segment that doesn’t date well, Lawler’s sons are presented as having special educational needs as a means to embarrass him as much as anything else. That’s the sum total of the segment, though Lawler does get another minute on the microphone after running the three men off. Very weak.

Unfortunately absent on Youtube or Dailymotion, the next clip was a showcase of Eddie Gilbert in Memphis. This covered everything that involved Gilbert against Lawler since the mid-80s, though that did also mean that Gilbert was largely being shown to lose time and again when it got to the important matches. What was great to see was the reaction to a match that saw Lawler nail Gilbert with a fireball – the crowd lost their mind. It also included Gilbert running Lawler over with a car after being fired by Eddie Marlin, which led to a bump that looked incredibly dangerous.

(Gilbert running Lawler over in 1990)

Over to Smoky Mountain Wrestling for only one segment and goodhelmet was clearly a big fan of The Heavenly Bodies and Jim Cornette as a number of their interviews turn up on the set even though they are good, if not spectacular. Bragging, talking about the women that follow them around – none of their interviews vary too much from that formula. It was two minutes that wasn’t anything worth really noting.

After a WCW-heavy last article, things again end with a decent slice of action from the promotion as the Clash of the Champions show led very quickly into Beach Blast. The Saturday Night show on the same day as the pay-per-view saw Nikita Koloff interview by Jesse Ventura. After complimenting each other’s hairstyles and Koloff explaining that Lithuania was no longer a part of the Soviet Union, Ventura turned things to brass tacks as he questioned what was in the envelope that the Dangerous Alliance handed to Koloff in recent weeks.

Madusa joined the interview as a representative to the Alliance and after Koloff gave a nice speech about gender equality, he turned down the offer and scared her in the process. Everyone did their part really well in this segment as Madusa didn’t speak, but looked shocked, whilst Koloff’s words made his character likable and he got a good pop for turning down the Alliance.

From the same episode of Saturday Night, Dusty Rhodes talked to Arn Anderson. I’ve not watched a lot of the post-War Games 1992 WCW action, so to see Anderson so loudly position himself as a World Heavyweight Title contender is something I’ve never really seen. Anderson proclaimed no more tag teams as Sting was his one focus. His strategy was to take the champion out of the air and work him on the ground. If a man can bleed, Anderson can defeat him. I’ll be intrigued to see whether Anderson did end up going opposite Sting later in the year.

The last three matches are from the Beach Blast PPV. I remember this being a show I bought early on in my collecting phase, though I genuinely don’t remember too much about it. The first match showcased was the Falls Count Anywhere contest between Sting and Cactus Jack. Whilst Jack wasn’t as big a name as some of Sting’s challengers, the fans were hot for the start of this contest. They probably knew they were about to see Jack throw himself around in an effort to hurt himself in the most creative fashion possible.He impressed, helped further by the lack of padding around the ring. The sound of flesh hitting the concrete was pretty grim as a swinging neckbreaker looked like it hurt Jack more than Sting. He also did his sunset flip off of the apron in an attempt to destroy his own tailbone.

The match briefly reentered the ring, though it was brief as Jack launched both men over the top with a wild clothesline. Jack’s next crazy bump was a back suplex on the concrete, but Sting also was willing to throw himself around as a Stinger Splash saw him collide with the guardrail.  There was still time for one missed elbowdrop from the second rope to the concrete before Sting won following a top rope clothesline. This was a great sprint/brawl that had Jack go above and beyond to make his opponent look great, as always.

The one match I did remember was the Beach Blast Iron Man Challenge Match between Rick Rude and Ricky Steamboat. As someone who doesn’t always remember the ins and outs of the matches I’ve watched, this one has always been lodged in my mind and I love every moment. The booking helped as Steamboat immediately targeted Rude’s ribs, a recurring storyline injury and one that allowed some more parity between the two men, rather than Steamboat having to sell for prolonged periods. Even after controlling the first eight minutes, Steamboat got over exuberant and charged into a knee in the corner. One handful of tights later, Rude was one-nil up and in control.

A Rude Awakening was enough for a second fall moments later, though Rude sold the impact of his own finisher on his ribs. One of my own personal favourite spots came next as Rude landed a top rope kneedrop. This cost Rude a fall via disqualification, but a small package immediately returned his two fall advantage and left Steamboat weaker for it. It was so simple, but just absolutely excellent heeling. With things almost at the halfway mark, Steamboat had a long way back to get in the contest, yet Rude had clear areas to target.

It all built to the big Steamboat comeback, of course. Sure, the pace slowed in the middle as Rude methodically controlled his opponent, but big spots like a piledriver for a nearfall threatened to take the match away from Steamboat. Brilliantly, Ventura commented that Rude needed not to take any high risks – whilst a tombstone isn’t exactly high risk, it wasn’t usually in Rude’s playbook, Steamboat reversed it and nailed one of his own to make it three to two, as Rude’s decision cost him.

With ten minutes left, it came down to whether Steamboat could do enough to pick up two falls whilst not giving another one away himself. A backslide within thirty seconds evened the match up, whilst spots such as Steamboat hitting a variation of the Rude Awakening for his own nearfall ratcheted up the tension. A sleeper hold by Rude might otherwise have been dull, except it built nicely to a finish in which – in the final minute – used the turnbuckle to push off into a pin to go ahead four to three. Rude’s wild attempts to tie things up with half a minute to go just added to what is, was and forever will be a great match in my eyes. Brilliant booking, ebbs and flows throughout.

The final match this week only included the finish as The Steiners met Terry Gordy and Steve Williams once more. The footage joined as Gordy hit a second rope powerslam on Rick Steiner for a two count, with an announcement soon after they there was five minutes remaining in the contest. This constant updating of time felt like it deflated the crowd as they could see this was going to the time limit. Rick managed to survive an onslaught from both members of the MVC, though a tag that came to Scott in the final 45 seconds meant he was unable to nail the frankensteiner in time to pin Gordy. The general consensus for this match seemed to be that the booking killed it a bit, even though the match was obviously good.

It was a fun return after my break, capped off with the Iron Man Challenge Match. Memphis might be a little downhill at the moment, whilst the WWF and Smoky aren’t offering up much in terms of week by week excitement, but WCW was still delivering enough at this point to make this fun to watch. Join me next week as I continue my trawl through 1992 in That Was The Year That Was.