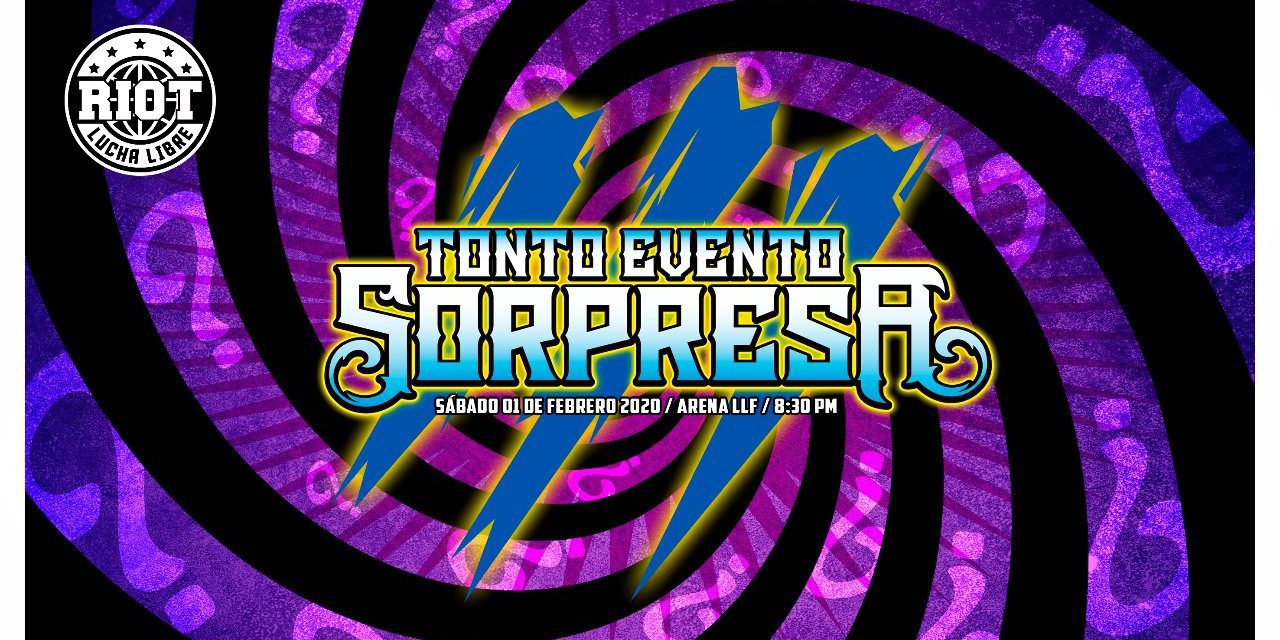 Some months ago, a bunch of friends, colleagues and respected lucha experts went to Lucha Riot’s Mystery-Vortex-like show called ‘Tonto Evento Sorpresa III’ (Dumb Surprise Show)… and the consensus was the same: it was outstanding. This shouldn’t be a surprise given the reputation Lucha Riot has garnered throughout the last year. With fun shows, electric atmospheres, the elevation of many talented luchadores and a smart social media presence, this Monterrey based company has become the hip indie lucha place to be.

Now, I have been too lazy (and cheap) to watch this highly recommended show, but here I am, ready to have a blast and see what all the fuss is about.  Better late than never

The show is available in Highspots Network as well as Riot Lucha Pivotshare.

Mr. Iguana provided the perfect way to kick things off. He came out riding an inflatable iguana, encouraging fans to join him in his viral dance around the ring. It was a joy to watch and you could feel the energy in the arena. If you haven’t seen Riot Lucha, you will know all about it with this brief entrance. The connection between wrestlers and fans is very special.

But hiding behind the fans is Muerte Extrema, Iguana’s opponent for the evening. He surprises and kicks the beloved green luchador, putting an end to the party and making the crowd immediately invested in the match. In a matter of seconds, the kids are chanting for Iguana, who never misses a beat by doing a tremendous job as the babyface in peril. After absorbing some punishment, he soars through the air and the crowd goes absolutely nuts. That’s the power of this man. He might not give you a five-star performance, but he will make sure you remember his name: in my book, he’s one of the top three most charismatic luchadores in the world.

The match structure is very basic, but after the epic entrance, some good heel work by Muerte Extrema and the aforementioned charisma that Iguana carries, the arena is living and dying for everything the babyface was doing. When their hero wins with a sloppy crucifix pin, there’s happiness all around. I doubt they will remember the underwhelming finish, because they had just experienced an electrifying performance from a man that knows exactly how to connect with fans.

This is one of those matches that can’t be ranked. This wasn’t a technical masterpiece, but as an opener designed to push Iguana and hype the audience, this was as perfect as can be.

The second match of the evening saw the team of Kratoz and Prometeo (also known as Los Mismos de Siempre) take on Charro Negro and Oro Negro. Even though the match was sloppy, it was super entertaining thanks to the creativity of everyone involved. Some crazy dives here, some beautiful teamwork there, and most importantly, a crowd fully supportive of the action. I came out wanting to see more of everyone involved, especially from Kratoz and Prometeo: the tag team chemistry is there, they just need more time to sharpen their skills.

I’m sure many people have done this comparison and I will do it again: the small arena, the cozy atmosphere, the presentation, wrestlers flying all over the place, the undying support of the fans… there’s a Reseda PWG vibe here. The wrestling style is somewhat different, but you have the sense that both luchadores and fans are having a blast. This match was a reminder of this comparison. ***½

Hechicero is one of those ‘what could’ve been’ cases of the last years. Fans love him and recognize him as a unique, spectacular technical talent… but there’s a sense of resignation around him: he’s another lost CMLL case. He’s been stuck doing nothing in ‘la seria y stable’ company for what feels like an eternity now. His independent ventures are always welcome and he is over in pretty much every arena, but you get the feeling that he should be one of the biggest names in lucha libre. Fortunately, the Monterrey fans treat him as such. People go freaking bonkers when Hechicero comes out for his surprise Riot debut. You can see people literally jumping with joy. His opponent is another technical luchador, ‘Mr. Riot’ Erick Ortiz.

If you enjoy llave bouts, this is right up your alley. Hechicero does some mind-numbing stuff with his arms and legs, trapping Ortiz in a variety of holds that would make Negro Navarro blush. Ortiz struggles to keep up with the pace, but he displays some nice submissions of his own. The match gets longer and longer, and the energy starts to go down. Hechicero fixes the problem by using his distinctive mix of strength and technical prowess. He becomes a ball of fury but slows down just enough to finally submit Erik. ***

Variety is the name of the game. Every match has been different and now it’s time for a big brawl. The Un-mexican team take the mic to express their disappointment at Riot for not being able to find a truly good team to face them. They threaten to leave without performing but they are interrupted by Carlos Santana’s ‘Oye Como Va’. The crowd erupts as La Familia de Tijuana shows up to wreak havoc.

After the welcome surprise, the match starts and I’m not gonna lie: it’s pretty bad. A bunch of disconnected hardcore spots and the non-existent pace make this a very hard watch. The fans in attendance are having a blast though. With the mess going inside and outside the ring, everyone seems to be in tune with the action. Finally, Damian 666 puts Kaientai on his shoulders only to receive a low-blow by Dash. That’s it, Kaientai covers for the win. Not a match you should watch, but again… the mix of styles so far has been successful as a live experience. *½

A triple threat involving the always awesome Black Taurus sounds like the antidote against the bad brawl that preceded. But it’s not. Taurus tries and tries, but he doesn’t get help from Madness and Korton, who are in a completely different match. It got sad at one point. Korton was missing every spot and the crowd started messing with his attire that is reminiscent of popular mexican TV character Ludovico Peluche. The reward of sitting through this is Taurus destroying Madness in the edge of the ring and some minutes later, pinning him for the win. Still, very disappointing and I’ve got to say: so far, Tonto Evento Sorpresa is not living up to the hype. **

Five hungry wrestlers came out to impress to different results. Aramis was as sharp as always but everyone else looked sloppy at some point. And I hate to be so grumpy, because these guys were trying really hard but this never surpassed the ‘generic spotfest’ tag.

It didn’t help that people were tired at this point. They had been roaring throughout their evening and it looked to me as if they were using this match as a resting pit. They were even being disrespectful to the wrestlers, shouting out dumb insults and calling them nicknames. Some of the luchadores looked nervous and started making mistakes.

Luchadores dived and dived, but they weren’t getting the same reactions as other people before them. It was good to see Jimmy get over though. Initially, he was getting dumb ‘Alan Pulido’ chants (because he looks like a mexican soccer player) but he managed to impress and get the deserved ‘Jimmy’ chants instead. Besides that, nothing special to see here. ***

Látigo comes out and the unfunny crowd starts chanting ‘Rey Mysterio’ to him. They redeem themselves by singing the lyrics to Arez’ theme song (one the highlights of the entire show) and then exploding for Flamita and Bandido’s surprise appearances.

We get a fast-paced match, full of high flying action and cool tag team moves. There’s a fantastic diving sequence that gets a huge pop. After more fun spots, Bandido hit a reverse rana on Látigo and Flamita followed up with a Phoenix Splash for the three count.

This was quick and entertaining but it finished just as everything was starting to click. I can’t say it was a masterpiece… in fact I feel like I’ve seen this exact same match a bunch of times. It’s worth a watch though. ***¾

Riot Tonto Evento Sorpresa III was a nice variety show that had a little bit of everything and was smartly designed and booked to create a tremendous live experience. I’m not surprised so many people came out of it euphoric: this is one of the most electric indie lucha crowds I’ve seen in some time.

It’s just unfortunate that the action never lived up to the atmosphere. Every match had at least one embarrassing botch, there were many underwhelming performances and I cannot say I was impressed with any specific bout. I had to struggle to finish watching it. If you are looking for the best in-ring quality, you will not find it here. Maybe it’s because so many friends hyped it as the best show they’ve ever attended, but overall I was disappointed by it. 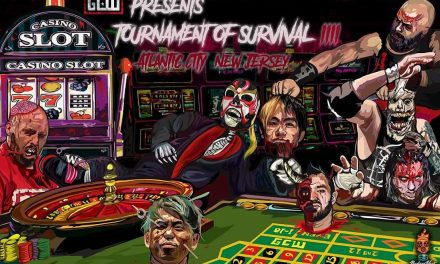 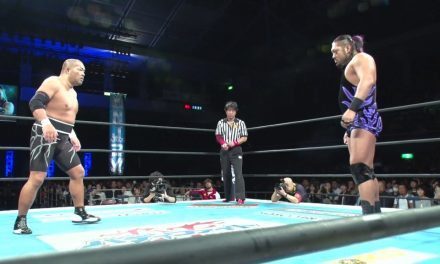 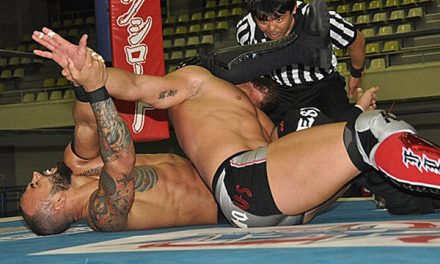