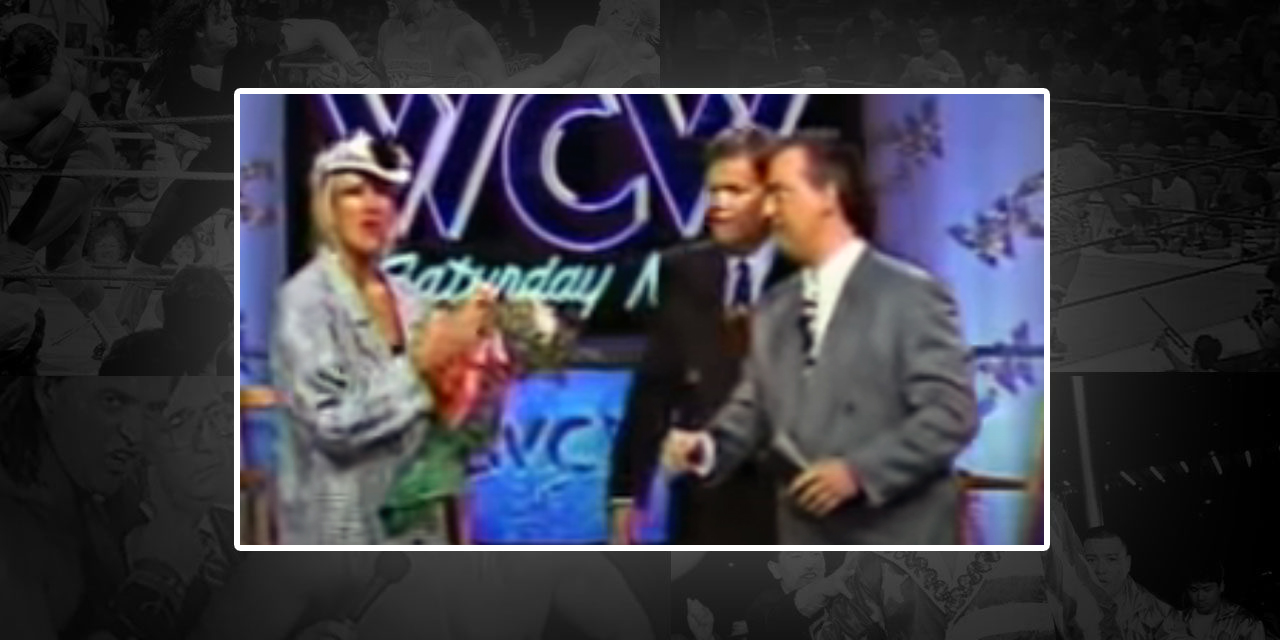 The collection of matches and segments I am watching for this series come from a 1992 Yearbook created by Goodhelmet, a longtime poster at the Death Valley Driver Forum and other wrestling places. A cross-section of the best (and worst of wrestling within a certain year), it is a great snapshot of everything of importance. The footage is taken from June 6-13.

WCW Saturday Night was the first stomping ground this week and things began with a standard Saturday Night interview with Jim Ross and Paul E. Dangerously inviting Madusa to the weird half-ring setup that they utilized. This was all to set up for a bikini contest between her and Missy Hyatt and was pretty racy for 1992 wrestling as both of the women traded words before Madusa stripped down to her swimsuit and Hyatt tried to before security grabbed her and took her away. Coupled with Dangerously and JR openly sniping at each other the whole time, this was a wild four minutes.

A two out of three falls match between Arn Anderson and Barry Windham looked good on paper, but having been stung on some of these overly long contests in recent weeks, I was hopeful that I wouldn’t be feeling the same about this as I did about Muta/Armstrong. This was for the WCW Television Title, currently held by Windham. Both men have the charisma and personality to make a slow start at least engaging, with some grappling punctuated by punches from Windham that had Anderson seeking cover. Windham worked the arm after Anderson missed a chop and smacked the ringpost, before Anderson worked the leg after using the top of his head to escape a sleeperhold. Like the previous matches of this style, things perked up just before the fall as Windham blocked an Anderson superplex and landed a top rope clothesline for the three count.

What made this more engaging than some that came before was the first fall arm and legwork gave both men a weakness and something to return to on offense. Admittedly, it also slowed the action right back down as Windham worked an armbar for a prolonged period of time – at least some targeted work on the shoulder made it seem like some real damage was being done. A missed clothesline saw Windham fly over the top rope, thus shifting the focus to the back of the champion, furthered by a mobile phone attack by Dangerously at ringside. Twenty minutes in, this was the first time the crowd really got into the match outside of the opening punches as they chanted Windham’s name, though they did largely maintain that heat for the final ten minutes.

Having worked the back, the spinebuster won the second fall for Anderson, leaving things neatly primed for the deciding fall. Normally, the face coming from behind to win two straight felt like the default way these matches played out, yet having the champion injured going into the final fall added a nice amount of tension. However, I wasn’t a huge fan of the finish. As Windham went to set Anderson up for the superplex, Steve Austin came in and attacked the champion. Having gone thirty minutes by this point, I was hoping for a flash pinfall, miscommunication – something other than what I got. I get why it happened, but it was a shame still. A good match, though still too long in parts to give a universal recommendation.

In an otherwise US-centric article, a trios match in Mexico somewhat breaks things up as Fishman, Blue Panther and La Parka joined together to take on El Hijo del Santo, Octagon, and Perro Aguayo.  This is some early AAA and the names, the music, the entrances and the women make this feel like a huge deal. The introductions had barely finished before all six men are brawling in and around the ring. Aguayo is over with the fans, but looked his age as he was triple teamed by the rudos and bounced around between the three luchadors. Things did settle down as the primera caida unfolded and it was the tecnicos turn to show their superiority for the most part, including Octagon sending La Parka to the concrete with a great arm throw off of the apron. Whilst Octagon and Santo offered the high speed technical offense, Aguayo just blasted Fishman at ringside with punches and a chairshot.

I was assuming that the technicos won the primera caida by countout, but apparently the cameras barely caught Santo making Panther submit. The segunda caida was short, but relatively heated as the rudos struck back almost immediately, earning quick submissions on Santo and Octagon. The fans are not happy as rubbish was getting thrown at the ring and the rudos didn’t give the tecnicos a chance to enjoy the rest period between caidas. The camera almost missed another moment as Octagon took off La Parka’s mask, though the rudo put it back on before being seen. Things flare up, then simmer down, yet never really boil over in the way that might have made this more special than it is. Still, some wild dives lead to an interesting finish as Fishman and Octagon remove each others’ masks at the same time, leaving one official claiming the rudos won; one, the tecnicos. This probably ended a draw and the tecnicos beat up the dissenting referee to send the fans home happy.

A light touch on WWF Superstars this week as a sub-minute promo from the Ultimate Warrior, a promo for the WBF Championship and an interview with Macho Man Randy Savage. Even in one minute, the Warrior managed to get off some interesting lines, including talking about the need to sacrifice his flesh to ‘walk like a skeleton’. The WBF promo came before the Savage promo and somehow comes across as even more ridiculous than the fake man grappling that was also on this show. What Vince was thinking when he decided to try and cross promote this is beyond me.

Savage was with Mean Gene in an empty arena as they discussed how far the Macho Man was willing to go in order to deal with Ric Flair. Quoting Bon Jovi ‘You Give Love A Bad Name’ amongst a number of other songs, Savage – with the help of a Mean Gene summation – warned Flair that he would break the rules if needed in order to keep his title. An interesting flex for a face world champion, though it does emphasize his hatred towards Flair.

Over to USWA and the fallout from the Eddie Gilbert versus Jerry Lawler match, though things began first with a pre-tape as Lawler talked to Ron Oates, a wrestler who was unsuccessful in his challenge for the Southern Heavyweight Championship. What might have otherwise been a fairly boring little discussion about how he had the ability but not yet the experience became much more interesting as Lawler references the Bladerunners. Speaking about how they had some success in Memphis, but only realized their potential with a change in look and a change in name, Lawler ‘rebranded’ Oates as The Hornet. Whilst the talk about Sting and The Ultimate Warrior spoke highly of their success, Oates was clearly designed to be a knock-off. It’ll be interesting to see how long this lasted.

Things shifted focus as Bert Prentice and Eddie Gilbert joined Corey Maclin to talk about the fallout from Gilbert’s loss to Jerry Lawler. Gilbert was great on the microphone at this point, simultaneously talking Lawler’s history up whilst also getting angry as he put his career on the line in the next match against the King. If he was unable to achieve his ultimate dream of taking ‘Lawler’s title’, there was no point in continuing.

Later on, in the same show, Jerry Lawler came for an interview with Corey Maclin, within which he revealed that he had both the USWA and the GWF Title around his waist. Lawler refused the calls from the GWF office to defend the belt, stating that they had to come to Memphis if they wanted it back. Unlike Gilbert, who talked up Lawler, the King was more dismissive of his opponent, introducing what was reported to be a montage of Gilbert’s greatest hits, but just showcased Lawler turning a figure four leglock into a winning pinfall from the match on Monday night. Lawler may be good on the stick, but his dismissive attitude hurt his opponent in this instance I feel.

Finishing off in Smoky Mountain Wrestling and this week saw the first-ever ‘Down and Dirty’ with Dutch Mantell. This was utilized as a chance for Mantell to introduce Barry Horowitz as a project of his going forward, highlighting a 0-43 record. Horowitz was a great putz in these types of segments and his surprise about just how bad his record is was great.

After another effective, if generic heel promo from the Heavenly Bodies and Jim Cornette (the Fultons are useless; the Bodies are beautiful; the women are ugly), a rare match from the promotion found its way onto the collection as what is originally Rip Rogers versus Brian Lee turned into a match with the Dirty White Boy instead after Ron White paid Rogers to leave. Rogers attacked Lee before leaving, meaning the champion (in his first title defense) was immediately vulnerable, though it wasn’t long before he was taking the fight to DWB. What followed was a pretty standard heel/face offering, though I enjoyed the arrogance and brawling of the Dirty White Boy when he was in control.

The finish was somewhat overbooked as Lee was busted open by a weapon shot from an object provided by Wright. With Hector Guerrero hitting the ring to tell the referee, Lee stole the weapon from DWB and clocked him in the face in front of the official, costing him the match via disqualification. The post-match brawl was the best part as Paul Orndorff hit the ring, leading to a double team on Lee and Guerrero hanging by his tie from the top ring rope.

A solid enough week with the best action probably having to be the Anderson/Windham contest, even with the slightly overly long running time and a poor finish. The lucha and Lee/DWB were also both worth checking out if either floats your boat. Check back next week as That Was The Year That Was continues.